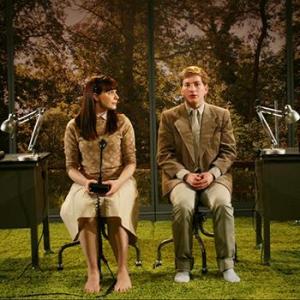 Phil Porter’s Blink  is one of the best plays to come out of the Edinburgh Fringe and you absolutely must see it if it’s coming your way.

I could end the review right here. Seriously, this play is best watched cold, without knowing a single thing about it. But if you must hear some spoiler-free reasons for why to go, the two flawed characters in it are thoroughly believable down to the last weakness, its 80 minutes is packed with more depth than most plays achieve in twice the length, and even a cold-hearted bastard like me was emotional by the end of it. Right. Stop reading. Buy your ticket now.

If you absolutely must read on, I will keep this as spoiler-lite as can be. Blink is billed as a dysfunctional love story. Normally, as soon as the word “love story” mentioned you should be wary. They are notorious for being crowd-pleasers where audiences will swallow any old tosh just so long as they get together at the end and live happily ever after. Maybe not so much theatre, but film and TV definitely. But this looked different from the start. The key image is of Jonah (Thomas Pickles) and Sophie (Lizzy Watts) sitting at desks outdoors in greenery. Interesting publicity images don’t always guarantee good plays; more often than not it’s a gimmick with no relevance to the story. Not here. Everything you see at the beginning is relevant later on. Won’t spoil it. Except for one detail.

The clothes. Jonah and Sophie’s clothes are both an uninteresting beige colour. They are both people alone in the world, invisible to rest of us. Sophie was only ever close to her beloved father. Jonah is a runaway from a religious commune with no idea of how to mix with the rest of the world. Bereaved Sophie, callously laid off from her job, stops seeing a purpose to herself, thinks of ending it all. Jonah receives a strange package in the post: the camera from Sophie’s baby monitor. Sophie find a new purpose being watched by Jonah, who doesn’t yet know she lives upstairs from him. They develop routines together. They follow a favourite soap together. The detailed plot is a lot more complicated than this, but it’s easy follow all the way. You could have filled a whole play with the plot up to now, but we’re still only 30 minutes in.

If this was a normal love story, it might end when Jonah chases after Sophie with the bag she left behind. It doesn’t, no matter how much Jonah want that to be the way they meet for real. Instead Sophie is hit by a van and goes into a coma. Again, a bog-standard love story would treat this as the key twist. She gets better. They meet for real. The first kiss. The end? … Not here. Real love stories don’t have endings. Perfect situations aren’t always as perfect as you imagine. Flaws you overlooked before can come back to haunt you. Nothing is ever as simple as “They all live happily ever after.”

There isn’t a weak link anywhere in the production. If I must pick a fault, I don’t think they quite got the sightlines sussed for Live’s 90° stage, but that is extreme nit-picking. Everything from the superb acting to Hannah Clarke’s stage design to Jack Knowles’s lighting to Isobel Waller-Bridge’s music to Joe Murphy’s directing fits together perfectly. Soho Theatre may only have had the producing credit for this (it’s a co-production with nabokov who appear to have taken the artistic direction here), but after a dud or two that they sent Live Theatre’s way a couple of years ago, they have thoroughly redeemed themselves with this. Well done Soho, more like this one please.

Blink continues to tour Edinburgh, Bristol and Birmingham until the 5th March.