Okay folks. I know the Edinburgh Fringe started proper today, but I’m still on holiday and I’ve had limited time for theatre blogging. I was going to write this last night but another event arose that I had to write about first. But now that I’m spending this evening at Rosslare Harbour where there is absolutely nothing to do, I’ve got a good chance to catch up.

So, for those of you new to these articles, these recommendations are for plays or groups that I previously heard of, where the endorsement is based on the strength of previous work. I will also be recommending plays I see during the course of this fringe, but that will come up in my upcoming “As it happens” article. For a guide on how the fringe works in general, rather than recommendations of specific plays, you can also see my guide on making the most of the Edinburgh Fringe.

And remember, there are gazillions of plays at Edinburgh and I can only discover a fraction of them, so these recommendations should be looked on as a cross-section of the good stuff on offer rather than an exhaustive list. There will be many more excellent shows out there that I’ve never heard of – some I may discover this year, but most won’t.

So, are you sitting comfortably. Then I’ll begin …

First on my list is High Vis, one of my discoveries from last year’s Brighton Fringe. This is a solo performance from Robert Cohen, who’s done impressive performance of both this play and another one called The Trial of Harvey Matusow (about a man who was a paid “informant” in the McCarthy era). I think I’d have the other one for an Edfringe run myself, but that’s personal preference and both plays were excellent.

The idea of this play is that Quint, a traffic warden, takes on training with the audience assuming the roles of the new wardens. Now, I think traffic wardens are unfairly maligned, and provided they do their jobs with common sense and discretion they provide a deterrent against thoughtless and dangerous parking. Unfortunately, Quint completely misses the point and thinks the goal is to be as big a jobsworth as can be. And sadly Quint adopts the same attitude out of work, and it’s back to bite him. See this at Phones4U on Princes Street (part of the free fringe) at 6.00 p.m.

Next I am going to recommend Inheritance Blues from Dugout Theatre. This is an old play they’re bringing back which I haven’t seen, but I’ve seen two previous pieces of theirs, Dealer’s Choice and Fade. Dealer’s Choice is a published play, but they did an excellent job of performing it. Fade was one their their pieces with some of the most innovative staging and choreography I’ve seen in Fringe Theatre – they maybe went a bit overboard with that at the expense of the story, but it’s still a great calling card for what they can do.

And … they started off as a student group. In a festival where countless student groups try to be ground-breaking and original but end up being the same as every other student group, it’s great to see proof that student theatre can work. This play is billed as a play about famalial debt, heavy drinking, sibling rivalry and a blue cover band, but if it’s anything like other production, there’ll be a lot more to the play than that. This is at Pleasance Courtyard at 4.45 p.m.

Now for an old

favourite, Bite-Size are doing their usual sets of 10-minute plays. Their plays have ranged from relatively conventional short plays so some weird and wonderful idea that are perfect to the short length. They do three rotating sets – all Pleasance Dome at 10.30 a.m. – and if you like this format it is well worth doing all three.

This year, they are taking the somewhat bold step of doing entirely new plays (new to Edinburgh that is – most have been to Brighton this year). Is it the right decision to do without its past successes? We’ll see. The only thing I will say is that if you like your Bite-Size plays as a safe choice rather than a bold choice, I would advise you to pick menu 1 or menu 3 over menu 2. There’s one play in menu 2 that is either brave or controversial depending on how you look at it. I will come back to this in due course.

And now, for a change, I’m going to recommend a group I’ve never heard of, on the strength of the play. Organised Crime Theatre Company are bringing Honest to Edinburgh, which I saw in its original 2010 run from the Royal and Derngate. This is a play about a civil servant who suddenly decides his job is all bollocks and chooses to say so to everyone. Okay, I admit I saw this play in the year my civil service job reached its maximum hellishness, but I can tell you from experience it’s all true. If you’ve worked in a policy team in the public sector, you will find it hilarious. Rest of you: this is what we have to put up with. This play is highly suited to Fringe revivals. Hope Organised Crime do this play justice. This is on for a short run from the 18th-23rd August at The Space, Jury’s Inn, 9.10 p.m. 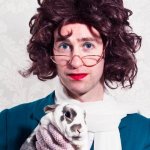 This next choice won’t come as a surprise for those of you who followed my Buxton Fringe coverage but may surprise the rest of you: Ms Samantha Mann: Stories about Love, Death and a Rabbit. This was my surprise hit from my Buxton Fringe Roundup, and although it is in the comedy section of the programme, this actually make an outstanding piece of theatre too. You can read the more detailed review in the roundup, but in short this is appears to be a show from an inept poet (Samantha Mann played by Charles Adrian) – but underneath there is a very sad story she gives away bit by bit. This is showing at PBH Free Fringe, Dragonfly, 3.10 p.m.

Also in the comedy section, Knightmare Live is back with Level 2. Those of you who remember the ITV series should need no encouragement to go – the audience for this is pretty much a reunion of fans who were all teenagers in the early 90s. And yes, this does work as an hour-long piece, it’s not just a short-lived gimmick. If you weren’t a teenager in the early 90s and don’t know what this Knightmare is, now’s a good time to watch the re-runs on Challenge TV and see what you’ve been missing all these years. Pleasance Courtyard, 5.30 p.m.

Finally, one group that I’m absolutely thrilled are returning are The Ruby Dolls with Fabulous Creatures. I discovered them by accident two years ago when they did a show that was part cabaret and part devised theatre of their family histories. Devised theatre is notoriously difficult to get right, and they did an okay job of it, but what sets them apart from the crowd is their superb musical talent and delicious four-part close harmony. This year they are promising a “fabulous feminist fairytale”. “Feminist” these days is an extremely vague term that can mean anything, but assuming they avoid the dreaded “Once upon a time everything was the fault of men and they all lived happily after” we should be in for a treat. This shows as Assembly Checkpoint at 3.00 p.m.

And finally finally, a show you should see – if you’re allowed to see it. As a matter of principle, I urge as many people as possible to see Incubator Theatre with The City. I’ve never seen their work before, and I’ve no idea whether or no this play is any good, but this play is the victim of politically-motivated censorship and the one way we can beat this is through the Streisand Effect. If an alternative venue is found in Edinburgh, see it. If it has to wait until a London performance, see it if you’re in reach of London. If the net result of powerful people gagging small groups is to turn these small groups into sell-out blockbusters, we can overcome the Liz Lochheads of the world – so do this before you are singled out as their next political target.

So, there you are. I have probably missed something, so there may be updates soon. So performers and punters alike, enjoy your fringe. I will be doing a split visit myself, so my coverage will start on Saturday 9th August. Watch this space.

UPDATE 05/08: After careful consideration, I have decided to add The Adventure Machine to the list. This is another Three’s Company production, and I’ve ended up recommending most of their plays. I frequently recommend Three’s Company plays for their combination of energetic performances, a wide range of scripts from hilarious to serious to surreal, and their trademark compulsory audience participation. However, I try to avoid repeatedly recommending the same groups too much, and as this was a children’s comedy performance – neither of which are the focus of his blog, I left it out. However, I had heard a lot of good things about this play in the last week, and – come on – it’s just like Choose Your Own Adventure! Who doesn’t want that? Normally I have no idea of what to expect, but this time, I suspect it might be something about like this sketch.