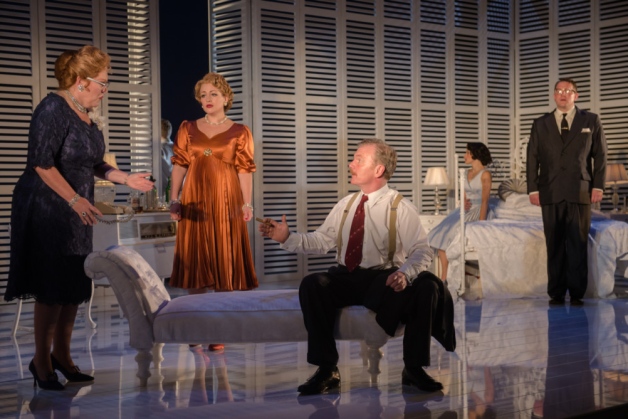 James Dacre’s take on Cat on a Hot Tin Roof at Northern Stage is thoroughly faithful to the script, and yet is staged in a way that make the plays his own to great effect.

Northern Stage does many things, but their speciality is classic plays with their own take on it. Sometimes they stage it in a way that’s not to everyone’s tastes (Blue Remembered Hills), and sometimes they pick plays that I think are now dated (Look Back in Anger), and they’ve got a relatively easy ride compared to nearby Live Theatre who stick their neck out with new untested plays. But on the whole, Northern Stage have an excellent record of doing what they do well, with a decent run of Catch 22 just under their belt. But Cat on a Hot Tin Roof got me particularly excited because this is directed by James Dacre, who was behind the superb The Thrill of Love from the New Vic last year. And a large part of the superbness came down to Dacre’s directing. And I am pleased to say that he did not disappoint in Newcastle.

Tennessee Williams might be a more specialist taste than many other famous writers of the period, but he was certainly one of the boldest. In a way, much of his writing was ahead of his time. Most famously/notoriously, he routinely dropped casually racist language into his plays, not because he thought it was okay, but because that’s the way things were. (For anyone not convinced by that, Sweet Bird of Youth is a good example of a play that portrayed the racist politician as the clear villain.) Then there’s subjects which are uncomfortable today, such as rape (or sex with questionable consent). Cat on a Hot Tin Roof, however, leaves both of these subjects alone for a change, and instead touches on the then-taboo subject of homosexuality. In the back-story is some sort of relationship between Brick and Skipper, friends and team-mates at College American Football. They might have had those feelings for each other – or they might simply have been close friends and it was just the way other people perceived it. Either way, the consequences were very real: Maggie, Brick’s wife, grew jealous of this friendship, Skipper slept with Maggie purely to show he wasn’t like that, and later killed himself out of guilt.

And so, in the play, Brick is now an alcoholic who has given up on marriage and everything else. Maggie struggles to stay in the marriage like a cat tries to stay on a hot tin roof. (Not too convinced by that analogy – surely the cat shoot would shot off a hot tin roof before you could blink unless there were a particularly fierce dog down below, but that’s where the title comes from anyhow.) In the meantime, Brick’s mother “Big Mama” holds a party for father “Big Daddy” who has just been given the all clear for cancer. Big Daddy nonetheless starts to make plans for who his cotton estate should eventually pass on to: childless Brick and Maggie, or adopted son Gooper and his wife Mae: less of a favourite but more responsible and five children in the next generation? But unknown Big Daddy and his wife, the all clear is only a well-intentioned but highly misguided white lie. The play is a highly intricate one with complex relationships between all the main characters, and no-one is unambiguously bad or unambiguously blameless. The irony is that it’s two most seemingly level-headed people who turn out to be the most greedy, self-centred and heartless.

But enough of the story. It’s a classic, so Williams clearly did something right, but what about the production? Well, James Dacre certainly knows how to put his stamp on on plays, from the moment you walk into the auditorium. My God! The set! It’s so … WHITE!!!! But once you’ve stopped being so dazzled, it’s one of the best sets I’ve seen. It gives a sense of unreality to the play, and whilst the play itself is a conventional single-set single scene play, it’s highly suits a situation that would have felt real and yet unreal. But it’s when the lighting comes into play that the set really comes into its own, especially when we see the firework display, and see the light coming through the slats in the walls. Great job from set designer Mike Britton and Lighting Designer Richard Howell.

There was perhaps fewer opportunities for Dacre to play to his strengths than The Thrill of Love. He is especially good at choreographing scene transitions, and there chances in Amanda Whittington’s play, and there wasn’t the chance to do that here. But he still found ways of adding in his own touch and a further sense of unreality. They were often just little things, but they worked well. Oh, and in order to direct a decent play, you’ve also got to do a good job of, you know, dialogue and blocking and all those things needed for a actual story. No need to worry here – he clearly got the story inside out, and it’s thoroughly faithful to the spirit of the story.

In fact, the only thing that went wrong with this play was something mainly outside his control – the actor playing Big Daddy was absent due to illness. So it fell to a minor character to stand in for Big Daddy whilst doing his own part. Should Northern Stage have had a full understudy ready for this situation? Without knowing the expense involved and the practicality of a company Northern Stage’s size providing one, I’ll reserve judgement, but it’s always a pity to see someone come on stage with a script. Even so, stand-in Sean Murray did an excellent job of holding the fort under the circumstances. In spite of being looking more like someone suited to play “Little Daddy” or “Medium Daddy”, he stepped into the part really well, got all the swings of emotion in, remembered the moves (or bluffed them so well no-one noticed) and if you can ignore the fact a script was on stage, you wouldn’t have noticed the difference.

When you recommend a play based on a director’s previous success, there’s always a worry at the back of your mind that this one might fail to live up to expectations, especially if the track record is based on a sample of one. But I needn’t have worried. James Dacre has fully lived up his high expectations from The Thrill of Love. Only downer for Northern Stage is that it doesn’t leave them with much artistic credit as co-producer (and same goes from second co-producer Royal Exchange). If anything, the artistic credit would go to James Dacre’s own Royal and Derngate. But it really doesn’t matter. When the stuff you bring to Newcastle through co-production is this good, Northern Stage can happily co-produce away. There’s a winning formula here, and it’s certainly one worth repeating.