Five one-act plays performed in a random order might look like a novelty, but the interlinking in Roundelay makes this the best thing Alan Ayckbourn has done in nearly five years.

Observant readers to this blog have noticed that, so far, I have never put an Ayckbourn play at the SJT into my What’s Worth Watching recommendations. Which might seem a bit odd to people who know that I’m a big Ayckbourn fan. There are two reasons for this, and the first is that every new Ayckbourn play gets loads of publicity and I prefer to concentrate my plugs on more obscure writers who need the attention. The second reason, however, is that it’s difficult to tell which new plays will be the must-sees. Alan Ayckbourn’s not had any totally new ideas for some time, but that’s okay because he keeps putting together old ideas in new ways and can still produce masterpieces, the last one being My Wonderful Day in 2009. Since then, however, we’ve have plays with ideas that didn’t quite work out, plays that did work out but had obvious derivations from old ones, and combinations of the two.

Truth be told, I was sceptical about Roundelay. This was billed as five one-act plays, so already I wondered if we were headed for a re-hash of Confusions. The difference from its predecessor was that the plays are to be performed in a random order, with the plays interlinked in a way that works in any order. I wasn’t sure about that at all. We know from Ayckbourn’s Norman Conquests trilogy that he’s the master of interlinking – and yet, for all the cleverness of linking three plays with a concurrent timeline and the same casts, I was never convinced that made the plays much better for the audience. Would Roundelay be a piece that took great writing skill yet provided a mediocre play? Would the random order just be a novelty? One might think so if the lukewarm reviews in the broadsheets are anything to go by, so I’m going to stick my neck out and say this is the best new Ayckbourn play I’ve seen for nearly five years.

Going in the order I saw them, The Star began the evening in a rehearsal of an inner-city youth theatre company. 16-year-old Roz has a fair amount of talent and a huge amount of ambition and wild optimism. She’s also one of these people who’s watched too much X Factor and thinks that instant fame’s a far better route than three boring years of acting school. So when theatrical agent Gale turns up for her out of the blue, it seems to good to be true. That’s because it is too good to be true – the fact she’s got her attention via her “exotic dancer” mother ought to set alarm bells ringing, but it doesn’t. But for now, however, we hear the story of Gale and Russ, the well-meaning vicar who runs the group in spite of the disinterest of most of the parents. Russ and Gale were teenage sweethearts back when they played Romeo and Juliet together – but Gale is not the perfect girl Russ fondly remembers, and never was. It’s in the next playlet, The Politician where we find Roz has been sent to the office prostitute-addicted sleazebag Leo Axminster MP. Roz, however, didn’t get the message and still thinks she’s up for an audition, setting up a piece of classic confusion-based Ayckbourn hilarity.

Sadly, the next play, The Agent, was a bit of a let-down, and a needless let-down. Returning to Gale, in the office of her business (now clearly an escort business masquerading as a theatrical agency), she gets visited by Lance, a heavy working for the local loan shark. Buying a few minutes’ time to get her things together, she looks for an escape, or a way to get help, but the only help is a middle-aged downstairs neighbour who believes all the bollocks he’s seen on CSI. This could have worked worked well as a playlet, but it just didn’t ring true. Gale, whom I assume was supposed to be terrified of this loan shark, mugged it too much for laughs to be believable. And more irritatingly: why didn’t she just go downstairs and find another neighbour with a phone? This was a weak link, which could have easily been avoided with a few tweaks.

Luckily the next one, The Judge, more than made up for this. Now Lance is pimping another escort girl, Lindy, who is role-playing “Noney”, a pet name for Antonia, the late wife of Tom, a retired judge. This a touching yet desperately sad story of a man who is forgetting his early life, and now struggles to remember the time he met his wife. With neither able to fill in the gaps, Lindy makes up a replacement story, presumably a memory from her own unhappy life, until finally Tom recalls the moment he desperately wants to remember. But the sad back-story doesn’t end there. In the next play, we discover that the after idyllic beginning, Tom and Noney’s marriage went downhill very quickly – no wonder Tom treasures the early days so much. But the main character in The Novelist is Blanche, Tom’s damaged daughter, previously seen as part-time secretary to that MP. Also reappearing is Russ, the vicar from the beginning, consoling husband and daughter on their recent loss. Now, when Ayckbourn calls Blanche a “novelist”, this is a loosest definition which extend to someone who writes endless prose, gets it self-published, and no-one else reads them. Although, to be fair, as the carer for her disabled mother, she needs an escape. It culminates in Blanche showing Russ her latest book, with a suspiciously detailed three pages about drowning an elderly woman in the bath.

Confusions is an Ayckbourn classic, but I think Roundelay tops it by a long way. The five plays of Roundelay are interlinked far more heavily (indeed, there’s a few half-stories that could have been interlinked into further plays), and yes, you can indeed watch these in any order and it works just as well. That alone doesn’t surprise me – Ayckbourn is easily skilled enough to do this – but I didn’t know he could do that and keep the audience as enthralled as a standard play without these complications. He can and he has. Please accept my apologies for my scepticism.

One small but excellent touch was the colour scheme. Throughout the poster, programme, costumes and set, there was a colour associated with each of the playlets. It was never overdone, always understated, but it was carefully chosen and added to what was already an excellent play. So credit in particular to set designed Michael Holt for doing this so well with the set. But Alan Ayckbourn is the lion of the hour here. Very few dramatists keep going into their seventies, and there’s always the worry that they’ll go onto the decline and deliver one disappointment after another. Any concerns I had about this have been put to bed, because Roundelay shows Ayckbourn is far from a spent force. 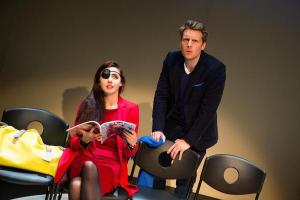 Meanwhile, upstairs in the McCarthy was Slipping by Claudine Toutoungi. This continues Henry Bell’s new writing programme, with Toutoungi last in action in Bit Part, the final playlet in Screenplay the month before. But whilst Bit Part was a broadly light-hearted piece about two sisters who were extras in a certain film famously associated with Scarborough, Slipping is a very different piece.

In this play, Elena goes round with an eye patch, because she is blind in one eye with an affliction that discolours it. And naturally, people stare at her eye patch just as much as they’d have started at the eye. Unfortunately, that’s the least of her problems; the other problem is that she’s a self-destructive person. It’s not clear whether she turned self-destructive because of the eye patch, or just that she’s naturally like that anyway and the eye was just the excuse, but the result is that she lies for the sake of lying, distrusts everyone, and seeks confrontation from people who could be there to help. But over the course of the story, she embarks on an affair with Sean, the young doctor who’s supposed to be designing a prosthetic eye for her. Sean, as it happens, is just as self-destructive. He takes drugs, he kept cheating on his wife (now his estranged and imminent ex-wife), and he doesn’t have the excuse of a duff eye.

When you heavily base a play on something scientific, a common way to do it badly is to cobble in a few quotes lifted from Wikipedia that don’t really form part of the story. Toutoungi, however, makes the eye an integral part of the play. And if the intention of the play was to make you think, it achieves that handsomely. Are operations like this really necessary? Wouldn’t it be easier if people just accepted these things for what they are? It’s implied in the play that Sean himself doesn’t think Elena should do this, and hinted that he find her eye beautiful as it is. And when you’re in charge of doing this operation and having an affair with the patient, of course that’s going to complicate things.

One thing I will mention was the back projections, only because last time when it was Screenplay I felt it was a bit overdone and garish. This time, however, it was a lot simpler. In most plays this could have been too basic, but in this semi-surreal setting it worked quite appropriately.

What felt missing from the play, however, was a proper story. The drive to create something thought-provoking comes at the expense of the plot, which never really seemed to raise the tension that much. The final scene, where you’d normally expect the audience to wondering how this will all be resolved (and care about this) only really ends with Elena fitting her new eye. The End. It’s not essential to have plot that ramps up tension, but it certainly helps when it’s play that 1 hour 30 minutes long with no interval. As such, I think this play would have been a lot stronger had it been 60-75 minutes long. It could still have had all the things that make you think, but it would have avoided the stretches where I was just waiting for the next interesting thing to happen.

I know 60-75 minutes is traditionally a play length that theatres don’t like: it’s thought to be too long for a set of one-acts, too short to sell tickets for a full evening’s work. I’m not sure this holds true any more; Live shows plays this length all the time and does fine. But here’s a suggestion: why not bring it to Summerhall at the Edinburgh Fringe? I think a condensed version would be ideal in any venue, but Summerhall is especially keen on plays with strong references to science or medicine. (And, let’s face it, we need more of this and less of the horrible pretentious stuff that Summerhall’s also keen on.) Anyway, Slipping is not a bad début for the SJT’s new writing programme. I’ve seen better new writing, and I’ve seen worse (and I’ve seen a lot lot worse), but this is definitely something to keep watching.