So, whilst Blunt and Bryant’s fans are busy having a scrap ever elitism in arts, here’s something going on in the north-east that does something about this. As I wrote earlier this week, money can be a barrier, but the bigger barrier is not knowing the right people in the right places. And one of the many contributing factors in theatre is a polarised view of big and little artists. In many places, a lucky few have links to big theatres that get all backing and all the attention. Everyone else doing stuff of their own backs gets ignored and has no support. And if you’re in the second group, it can be nigh on impossible to get into the first group without friends in high places.

Well, up in Newcastle, there’s a low-key project going on that might be able to change this. There’s a small group called Alphabetti Spaghetti Theatre who are setting up what they call a “fringe theatre” (more on this in a moment). For most of the last two years, they were running an upstairs space in a pub called the Dog and Parrot. But last summer the owners decided they didn’t want them at Dog and Parrot any more, so they’ve decided to go a step further this time and open an actual theatre space. Details of the plans are still sketchy, but I understand they’re going to be programming touring shows looking for a space in Newcastle first, and take it from there later.

END_OF_DOCUMENT_TOKEN_TO_BE_REPLACED

COMMENT: Chris Bryant sort of has a point about lack of social diversity in art – but it’s a lot more to do with connections than class.

Well, well, well, it’s all been kicking off today, hasn’t it? Last Friday Chris Bryant spoke out against lack of social diversity in the arts, singling out in particular middle-class ex-public school boys over working-class salt-of-the-earth types. He called for fewer James Blunts and Eddie Redmayes. James Blunt heard about this and wrote a rather sarcastic open letter back. It started off calling him a “classist gimp” but then went on to make some quite valid points about how little help his public school education was in becoming a singer (before signing off as “James Cucking Funt”). Chris Bryant tried to respond with a another letter trying to clarify what he said, but by now everyone was practically forming a circle round the two of them shouting “Fight! Fight! Fight! Fight!”

So before this escalates any further, let’s keep this in context. For the record, I fucking hate James Blunt’s songs, especially You’re Beautiful, but I do have a kind of grudging admiration for the second career James Blunt has carved for himself by being, um, blunt. My favourite one-liner was when a random Twitterer wrote “Who is a bigger twat: James Blunt or Robin Thicke?” to which James Blunt replied “Me! Me! Pick me!” As such, James Blunt’s letters should be taken with a pinch of salt, and “You classist gimp” should be treated as equivalent to “Excuse me, but I think you some of your assumptions are a bit unreasonable” from anyone else. Chris Bryant, on the other hand, wasn’t trying to engage in a classist tirade against James Blunt – he was just ill-advised to pick a couple of names out of thin air. Oh the whole, however, I see what Chris Bryant was trying to get at.

I will now try to give Chris Bryant a hand, because I think he’s underestimated how complex this problem is.

END_OF_DOCUMENT_TOKEN_TO_BE_REPLACED

Sorry for the delay getting these recommendations out. I had intended to do this last week, but this got put on hold after the dreadful events going on in Paris. I wrote my thoughts on this last week. It’s a long article, I’m not going to ask you to read the whole lot, but for all the artists out there who haven’t spoken out on what happened to satirical magazine Charlie Hebdo, you should do. A lot of people are fast to condemn the murders but slow to condemn censorship of arts through threats of violence. It is a serious problem too in the UK, from Behtzi ten years ago to The City last year, but too many are turning a blind eye if they don’t support the views of the artist being told to shut up – some people even blame the artist for bringing threats of violence on themselves. This must stop. We should all take a stand against this, whether or not you agree with the views under fire. Fail to speak out now, and one day it could happen to you.

Okay, enough of a digression. Let’s get on with the recommendations. Here are the plays that have caught my attention up to and including May 2015 (excluding the Brighton Fringe, which will be covered separately). Once again, there’s quite a lot. I am going to stick with my format of safe choices and bold choices. Safe choices are plays that I am confident you will enjoy if the description of the play appeals to you. Bold choices are ones which may or may not work out, but have the potentially to be great if all goes well.

So, starting with my ultra-safe pick which I’ve seen before and therefore know exactly what to expect, it’s Birdsong. This came to the Gala Theatre last ye 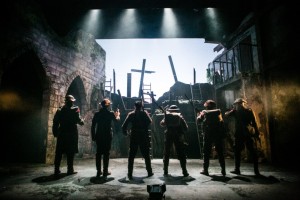 ar. I hadn’t read the book and I was sceptical, because I know there are many mediocre adaptations for the stage or screen where the sole selling point is the famous book title. People who had seen the book, on the other hand, were sceptical because they thought you couldn’t possibly make a novel this complicated work on the stage – including Sebastian Faulks himself. But Rachel Wagstaff had a go anyway and the Original Theatre Company produced and – would you believe it – they’ve done a good job of it.

I reviewed it last year, which you can read here. Short version, it’s a story that cuts back and forth between central character Stephen’s doomed affair with married Isabella, and the war a few years later. What’s the name of that river where they had their picnics together? The Somme – that’s a nice name. It’ll be always be known as a beauty spot, won’t it? It doesn’t quite match the tension of bespoke stage plays such as Journey’s End, but if you liked plays such as that one, you shouldn’t be disappointed with this. And you don’t need to have read the book. This national tour will take in Northern Stage on the 23rd – 28th February, Darlington Civic Theatre on 10th – 14th March, and West Yorkshire Playhouse on the 12th-23rd May.

END_OF_DOCUMENT_TOKEN_TO_BE_REPLACED

COMMENT: Maybe Charlie Hebdo has racist content, maybe it doesn’t. Either way, responsibility for the massacre must be shared by the people who pandered to the kind of censorship preached by the killers.

So, just when I thought the attacks on freedom of speech couldn’t get any worse, they did. This time last year it was death threats against a politician who spoke out against censoring drawing of the prophet Mohammed. Then it was a hate campaign against a group of Israeli actors for coming to the fringe with the wrong nationality. Then it was threats of mass murder over a film that lampooned the leader of North Korea. And now, it’s actual mass murder, once again over some drawing of Mohammed.

Let us be in no doubt as to what happened on Tuesday. It was not just an attack on twelve innocent people. It was a fundamental attack on freedom of speech, a right we too often take for granted. On the murders themselves, there has been overwhelming condemnation across the world; that is the least that can be expected. But on the attacks on freedom of speech, I am sorry to say that’s a different matter. Collectively, we are not properly defending free speech from harassment, intimidation, and threats of violence. The blame for the murders lies first and foremost with the murderers, but after than, we have some serious questions to ask about our own responsibility in this.

First thing’s first: some people say it was pandering to censorship led to the attacks. I won’t make that claim, because we don’t know. To anyone with a shred of humanity, Al-Qaeda is a baffling ideology. They are not defenders of Muslims, unless you think that deliberately killing masses of innocent Muslims Iraqis in order to provoke sectarian violence with a death toll hundreds of thousands counts as defending Muslims, which I don’t. But they do, and with a moral justification that incomprehensible, God knows what else they were thinking. What we do know, however, is that Al Qaeda affiliates run a highly organised propaganda campaign of fear, so it’s a fair bet they’re happy to silence outspoken voices if they can. And that’s where we come in. Our message, time and time again, is that you can silence dissidents and get away with it. Our message is that when it comes to political and religious censorship, harassment works. And intimidation works. And violence works. END_OF_DOCUMENT_TOKEN_TO_BE_REPLACED