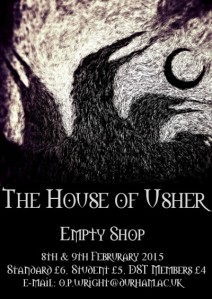 The promenade performance of The House of Usher at The Empty Shop could easily have been a disaster. And yet, against these expectations, it came off rather well.

Blog regulars may have noticed I review very few student productions. When I’ve seen good student theatre, it’s been outstanding, but that’s a minority. Okay, I’m a strict marker, I don’t make allowances for not being amateurs, and at festival fringes I expect student theatre to compete with the professionals – but the fact remains that the good pieces of student theatre I see are considerably outnumbered by the mediocre, unfunny and horribly pretentious ones. So the only reason I went to see The House of Usher was curiosity. Ever since The Empty Shop got its souped up license in 2012, it’s hosted a few plays, a lot of it the overspill from the student Assembly Rooms. But so far, they’ve all used a single room as a performance space. With this one using the whole building, I thought I’d check this out.

Had this idea simply been pitched to me, I would have been sceptical. Devised theatre is hard. Student productions very easily get out of their depth. They are usually guaranteed a large appreciative audience from all their friends, but local enthusiasm can be a bad thing. As for a promenade performance as complicated as this one – going straight into the venue without an practice runs with a practice audience is extremely risky. On the whole, there’s so many things waiting to go wrong, the odds were stacked against them. And they, this lot have defied the odds, and put on a very ambitious play that, whilst not perfect, comes off rather well.

Having asked how this play was devised and produced, I’ve concluded this is either ingeniously-plotted piece of promenade theatre or an utterly reckless gamble where they got lucky. I can’t decide which, but either way they can be happy with the end product. The format of the play is a series of monologues based round various Poe stories and poems, both The Fall of the House of Usher and others. Rather that watching them sequentially, the audience are split up and taken from playlet to playlet in no particular order.

So I got the sister who got buried alive in House of Usher, then a gambler who plays pontoon with the devil (the devil cheats and looks at your cards, because devils do that, you know), and concluded with the brother who buried the aforementioned sister. But my favourite one had to be Claire Forster as The Lady of The Oval Portrait. We had to sketch her posing whilst she told her story of the husband who loved the painting of her more than the woman he was drawing. The biggest attraction when she snatched a drawing, complained she’d been made to look unhappy, and tore it up. The only bit which I felt didn’t quite work out was the bit at the end. I think it might have been the Tell Tale Murderer, but with he already trying to keep up on the other stories, and the other actors walking round chanting, I lost track of this one. It might have helped to simplify this.

One thing to be aware is that if you’re not familiar with the story of The Fall of the House of Usher, you won’t be any wiser after seeing this, although Poe fans assure me that all of the characters were faithful to the stories. It could perhaps have been more cohesive had the guide at the beginning had been incorporated into the play a bit more. But it doesn’t really matter that the whole thing’s weird and confusing, because that’s exactly the intended effect of Edgar Allen Poe stories. This group were either very bold or very reckless, but with site-specific theatre being so hard to pull off, it’s a good job done.