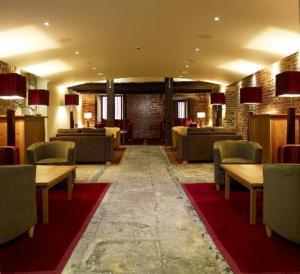 COMMENT: Alphabetti Theatre is a big step in the right direction for Newcastle. Here’s a suggestion for how Live Theatre could do the same.

Tomorrow is the grand opening of Alphabetti Spaghetti’s New Theatre in Newcastle. I’ve been promoting this during their crowdfunding phase, because I think it’s a welcome development in Newcastle. Anyone who have been to the festival fringes at Edinburgh or elsewhere will know how good a play can be from a small group in a small theatre space with next to no budget – and yet, in spite of Newcastle having a lot of groups on this scale, there’s never really been anywhere notable to perform it. Alphabetti’s predecessor theatre, an upstairs room at the Dog and Parrot, was a start, but this has so much more scope.

So, what’s not to like? Nothing really – except that this responsibility shouldn’t be falling to one small group of actors. There are already plenty of performance spaces in Newcastle’s existing theatres that could just as easily do what Alphabetti theatre’s doing. And even with Alphabetti’s new theatre up and running, why stop at one fringe space? Why not more? After all, festival fringes work so well by having different venues and different shows competing with each other, and may the best performers win. But most similar-sized performance spaces stand idle much of the time. This is common practice throughout theatres not just in Newcastle, but across the country. As such, it’s unfair to single out one theatre too much. But with Live Theatre seeing itself as the leading source of new writing in the north east, if anyone has a responsibility to support fringe groups more, Live Theatre does.

Venue hire is something I’ve found to be one of the biggest oddities in professional theatre. Again, this is a practice not confined to Live, but walk into any theatre and you’ll see signs saying “Hire me! Hire me!” Look at what we offer you: wi-fi, catering, prestige. You name it, we provide it, a perfect setting for your conference, wedding, party, whatever you wish. And there’s just one glaring omission from the list: theatre. Yes, the one thing they don’t appear to encourage is using theatre spaces for actual theatre. On the rare occasions when people make enquiries about this, they get quoted prices that are wildly cost-prohibitive. It’s as if Live and other theatres would rather leave their stages unused that allow outsiders to perform on them.

So why so much of a problem hiring out a theatre for theatre? They get money for hire and bar takings, the performers get the space they want. The financial risk falls entirely on the performers. Sure, there’s problems over hiring groups not treating the theatre with the respect it needs, but that’s the same risk for conferences or weddings, and they manage. Why don’t they want this? … Well, maybe there is a reason. Although Live or anyone else never publicly states why they make it so difficult to hire out their spaces for theatre, I can guess. And if it’s the reason I think it is, I sympathise.

Here’s the problem: Live had the reputation of their performance spaces to think about. So what if a corporate do was atrocious? Live still keeps the money, but it won’t harm ticket sales. But what about if a privately-hired play was awful? You might need to worry then. People might incorrectly assume that if this one was so bad, Live’s next in-house production will be no better. Now, I wish it was like the Edinburgh Fringe where people judge plays on who’s performing them and not the space they’re performing in – does anyone refuse to go to Pleasance Dome because they saw a bad play there once? – but Live Theatre is not the Edinburgh Fringe. The expectations in Newcastle are very different. I’d love a theatre such as Live to challenge this attitude head-on and say that audiences can judge individual plays for themselves, but that’s a gamble than could result in the closure of the theatre. I cannot ask anyone to risk that.

Okay, how about the studio space on the top floor? Live seems to be just as resistant to hiring out the studio space for theatre. There certainly is a stronger case for opening up the studio space. Yes, a privately-hired production that bombs in the main theatre isn’t going to do in-house productions any favours, but the studio space is supposed to be where Live can try out new things and take risks. No-one worries about a bad studio piece affecting ticket sales for downstairs. But even so, I fear it’s not that simple. Live Lab’s programme in the studio theatre is a very particular one with a specific artistic slant. Would that work in a programme surrounded by any old plays on private hire? Programmed work in a theatre typically works on a split of ticket income. Could you really run a space with a mixture of hire fees and box office shares? I’d like to think all of these logistical problems could be overcome, but without me being in charge, I can’t know if that’s the case.

So, let’s assume that it’s not feasible hire out either the main stage or studio space for theatre. Let’s suppose there’s too many problems mixing in-house productions and invited travelling theatre with private hire for anyone who pays, both in terms of practicalities and risks to the reputation of the in-house productions. What we really need is a space which isn’t currently used for theatre, where Live has nothing to lose. And it just so happens, Live does. The undercroft bar. So here’s my suggestion for Live: use the undercroft bar as a performance space, available on an open basis. Here’s how it could work.

Firstly, I have no doubts this is a perfectly workable performance space. Okay, it lacks wings and a lighting rig, but there are plenty of spaces at festival fringes with one or both of these limitations, and performers find ways to work with the space. You’d probably be limited to using it when there’s nothing going on in the main theatre (you need all the bar space you can get when there’s a theatreful of people hanging around), but that still leaves plenty of opportunities when the main theatre’s not in use. Who knows, if enough people hire it out, maybe you’ll be able to pay for a lighting rig.

Secondly, the reputation of Live’s productions really has nothing to fear this time. I can see why audiences might get confused over what’s what in the main theatre, but surely Live’s theatre audience can understand the different roles of different spaces if this is explained, especially if you keep the programme for the undercroft separate from the main/studio space (which you probably need to do anyway for logistics). Northern Stage doesn’t seem to have any trouble keeping amateur hire separate from professional productions in stage 1, so surely Live can handle this.

How much should Live charge for hire? In theory, they could calculate the amount that would make them the most money, and plough that back into their main season. I would hope, however, their first priority would be to further art in Newcastle, make as much use of the space as possible, and so only charge as much as is needed to cover costs (including, of course, overheads such as the extra staff hours you’d need to man a third space). Who should be allowed to take part? My idealistic side says it should be open to anyone who asks, but a fair balance might be groups who, at a minimum standard, 1) know what they’re doing, and 2) are doing someone original. If more people come forward that slots available, then we can think about tighter vetting, but we can cross that bridge when we come to it. And if that situation does arise, Live will already be laughing all the way to the bank.

And, of course, if a group prove to be a runaway success, Live might want to consider taking them further. No need to make guesses about audience appeal, the evidence is already there for you. Meanwhile, people going to mainstream plays might, just might, give one of these undercroft plays a chance, love what they see, and give Live the credit for introducing them to the next big thing. So there you go live, my pitch for a scheme where everyone’s a winner.

This is all complete fantasy. I have no reason to believe this future will come to be. The practice of theatre programming by invitation is so deeply ingrained, I see no prospect of this changing. The idealist culture of open access theatre doesn’t extend much further than festival fringes such as Edinburgh – and even this is routinely misunderstood by theatres who routinely portray the Edinburgh Fringe as they place where the best players and comedians are invited to perform. If theatre is to be opened by beyond the lucky few invited to the big stages, it’s going to be through Alphabetti Theatre in Newcastle, the Empty Shop in Durham, and maybe other projects following in their footsteps.

But I hope that projects such as Alphabetti Theatre give bigger theatres such as live some food for thought on grass-roots theatre. After all, Live itself began that way. There is a current mindset within theatre that everything can be divided into commercial, subsidised and amateur, and that needs to stop. In festival fringes, where no distinction is made, we see time and time again that the best amateurs are as good as the best professionals, and they certainly don’t need the blessing of their local subsidised theatre. If Alphabetti gives some artists a break that would have slipped through the net of Live and Northern Stage, that’s good. But if it inspires Live and Northern Stage to do more to provide a platform for emerging artists to show their work to an audience, and let the audience be the judge, that’s even better.