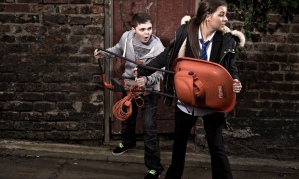 Despite a few niggles over the episodic format, Day of the Flymo is a thoughtful play that won’t disappoint fans of Wet House.

Paddy Campbell’s had a whirlwind 18 months at Live. His début, Wet House was so much of a smash hit it won the Journal’s award for Best Play and got a revival at Live the following year. So now he’s following it up with a second play, Day of the Flymo, again at Live Theatre. What could possibly go wrong? … Actually, quite a lot. When your first play is that much of a runaway success, people’s expectations go into overdrive. And there’s no guarantee that the next play will live up to the blockbuster you’ve just done. Has anyone heard of The Sparrow? Thought not. That was a flop of Alan Ayckbourn’s that immediately followed Relatively Speaking.

Well, if Paddy was worried this might happen, he needn’t have done. It’s another decent, thoughtful play, and anyone who liked Wet House won’t be disappointed with this. It’s fair to say that Campbell played it safe this time and stuck to his strength, which is writing about what he knows, but its a strength that serves well. Last time it was based on his work in a hostel for alcoholics. This time, it’s based on his experiences of social care. But there is one big difference between in two plays. In Wet House, a bad situation was made worse by a sadistic carer who brutalised the residents, manipulated the other staff, and bullied everyone. In Day of the Flymo, social worker Ben (Akemnji Ndifornyen) is competent, capable, good-natured, and works with equally dedicated people – and yet, even with the best will in the world, things go wrong very easily.

The story centres on Liam (Kalem Patterson), a 13-year-old with, it appears, the difficult combination of Asperger’s and ADHD. He’s a tearaway who got himself thrown out of school, and was probably mentally damaged by his violent father. A strong theme of the play the effect Liam has on his family. Mother Karen (Jill Dellow), having taken the worst of her husband’s violent behaviour, never fully recovered and doesn’t know how to handle her son. Which mean it falls to Liam’s half-sister Becca (Tezney Mulroy) to look after the whole family in the middle of her GCSEs. Desperate for respect, Liam makes friends where he can: first with mischievous old ladies who get him to mow the lawn (amongst other tasks); then Clara (Sophie Pitches), who bunks off her posh school and his family issues of her own; and then, most alarmingly, a gang up to no good who can set him up for anything.

A lot of aspects of social work are captured in the play. The humiliation Liam experiences by being treated as not right by officials who’s come to help. The humiliation of Karen who, in spite of everyone’s insistences otherwise, feels she’s failed as a mother. Clara’s story is near miss where the social services nip a problem in bud, but there’s also the story of one of Ben’s early cases, a needless intervention that sent a kid into a downward spiral with no happy ending. Paddy might simple have lifted all this from real events he knows about, but he puts together a thoughtful and convincing world of the difficulties of social care.

But as well as the writing, much credit must also go to Live Theatre’s youth department. Youth theatre often gets an artificially easy ride because, well, no-one looks good rubbishing the efforts of kids, do they? Far easier to say they were all great. This time, however, the praise is thoroughly earned. Most youth theatre plays work by writing relatively easy parts for a large cast, but this play deliberately made the three youth parts as challenging as the two adult parts. But thanks to Paul James’s directing, they rose to the challenge handsomely. All three youth actors are to be commended, but especially Kalem Patterson for the lead role of Liam.

Now for my niggle. Good though the play was overall, I’m still not convinced by the episodic format used. There was also a similar weakness in Wet House. Storyline in plays are at their strongest when the tension builds up throughout each scene, and you normally need some sort of peak towards the end. The shorter the scenes are, the harder it is to do this. There are ways of building up tension over the course of a whole play when it consists of mini-scenes, but this one didn’t really do it. Some scenes, I felt, ended abruptly. Others, I felt, went on longer than they needed to, and there wasn’t really a sense of continuity between the scenes. And the central sofa that was only used in some of the scenelets got bloody annoying when it got in the way of other scenes taking place behind it. To be fair to Paddy, his plays aren’t the only ones at Live to suffer this problem; I’ve seen other Live-backed plays make the same mistake. I continue to wonder if Live are encouraging this format. I’ll be disappointed if this turns out to be the case, because it’s exactly what they told me not to do on their writing course.

This doesn’t really matter for this play. The strength of the play is in the characters and the portrayal of life in care, and that more than makes up for the niggles in the pace. But it’s something to look at for future plays. The problem within writing about what you know is that, one day, you run out of things to write about. Moving on to other subject material can be a huge let-down. It’s happened. I hope that, when the day comes, Paddy will succeed with this challenge, but this is where management of tension and pace could make all the difference. For now, Paddy Campbell, Live Theatre and the youth performers can all congratulate themselves on a job well done. For the future, good luck.

(Correction: The original draft said the lead character’s name was Ben. It is now corrected to Liam. Oops. Sorry.)