Lorne Campbell’s decision to stage Cyrano de Bergerac in a gymnasium is very strange indeed. But in spite of this, it’s still a production worth seeing.

Right, here’s a fact I bet you don’t know. Anthony Burgess – yes, that’s the same Anthony Burgess of Clockwork Orange fame – was also a skilled literary translator, and amongst his translations is Edmond Rostand’s 19th century classic, Cyrano de Bergerac. Set in swashbuckling France at the height of the Three Musketeers era, Cyrano de Bergerac is an legendary duellist and respected commander of the French Army, let down only by his ugly long nose (and woe betide anyone unwise enough to poke fun at it too much). His less-known weakness, however, is his love for Roxanne, disguised so well even Roxanne believes him to be only a friend. But Roxanne loves handsome Christian, a new recruit to Cyrano’s company, and he agrees to act as a go-between. But Christian, shy and lost for words, relies on Cyrano to write his love letters for him. Wait a second, I think I’ve seen this story before. And from what I recall, it never ends well.

Here’s the thing. Burgess’s translation of Cyrano is very faithful to the classic language in the original and writes the play in verse. It’s arguably got more in common with Shakespeare than it does with the ground-breaking films that Burgess is famed for. And as we all know, a common practice for Shakespeare’s plays is to transplant them to all sorts of different settings to put your own mark on it: Macbeth in 1920s Chicago, Romeo and Juliet on a housing estate, Hamlet on a bouncy castle (no, I didn’t make that up), you name it. Lorne Campbell clearly chose to do the same here. It’s not the first time Northern Stage have done an unusual staging for a play – two years ago it was Blue Remembered Hills on a grey bare stage – and I’m open to suggestions for how you could stage this play. But I can safely say the one place I would not have chosen to set it is a modern-day gymnasium.

I don’t understand why this setting was chosen, because no attempt was made anywhere in the play to explain the link between the two. I suppose the ensemble actors being dressed in fencing gear is a sort-of-connection to the lead character being a duellist, but when you mix ensemble actors in modern sportswear with leads in 17th-century panaches it gets kind of disorientating. Couples with actors sitting on plastic seats in a 17th-century theatre, handing round plastic bottles as refreshments, rapping into the microphone to al electro-swing beat, and leads and ensembles playing multiple roles with minimal costume changes, and it got really confusing. Now, it’s fair to say that companies like the RSC do this sort of thing all the time in Shakespeare, but you can get away with it in Shakespeare because most of the audience are familiar with his 38 plays. With me being unfamiliar with Cyrano de Bergerac – and I suspect most of the audience are in the same boat – I spent much of the first half wondering what the hell was going on.

To Campbell’s credit, once I’d finally worked out who was who, what was what and where was where, things went a lot more smoothly. Even if a gym didn’t make sense as a setting, they certainly made highly innovative use of the set, with monkeybars, plastic seats, fencing dummies, gym horse and foam cubes serving all sorts of functions. One thing that is easy to overlook is just how complex this kind of production is. It’s one thing to manage multiple actors on stage, but managing multiple props too is staggeringly complex, especially when it’s dozens of props that move around the stage all the time. Failure to move one prop to the correct place can be disastrous, but – as is often the case – the big achievement is the absence of something going wrong. Credit also for the costume, Cyrano’s nose, and, of course, the acting, which I nothing to fault. And I’m especially pleased to say that the ensemble actors from NORTH were just as good as the principals. 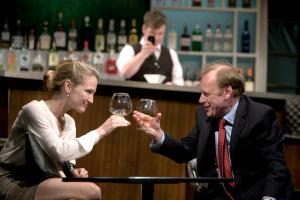 Meanwhile, over at Live Theatre, they’ve been doing their run of What Falls Apart by Torben Betts. I almost missed this play because I’ve been busy sulking over the election and I wasn’t really in the mood for more politics, but as one of my Sure Choice picks I made an effort to catch it. I had high expectations of the strength of The Swing of Things, which I saw, and Invincible, which sounded good and I heard a lot of good things about it. However, in contrast to Cyrano de Bergerac, there was a very promising opening to the play – but the play as a whole turned out to be a disappointment. And worse, it was an easily avoidable disappointment.

It began so well. It’s the general election and Tom Savage, candidate for a safe Labour seat in Newcastle, sits at the hotel bar after a long day campaigning. On the graveyard shift is barman Gary England, with so much general knowledge you’d want him on any pub quiz. We learn later, however, that he’s an ex-Iraq veteran with deeply troubled past. And joining them suspiciously late is Venetia Fitzpatrick, apparently a visiting academic at a conference, but actually a tabloid hack looking to set him up, at the behest of an editor who hates Tom and his left-wing views. But it’s Tom who has the most interesting past: born to lifelong socialist parents, a star MP in Blair’s government, once a teetotaller, but turned to alcoholism after alienating everybody – himself included – by voting for the war in Iraq. In spite of being sloshed, Tom still find the time to trot out his favourite political stances the moment the subject is vaguely raised. (And yes: I can vouch this is normal for sloshed politicians.)

The problem with this play is it turns into Torben Betts’ soapbox. Betts clearly has a lot of left-wing opinions if his Twitter feed is anything to go by, and what Tom Savage says is presumably the author’s own opinions. Torben did avoid the worst possible kind of soapbox play, where the central character is absurdly idealised and wins every argument (or worse, God save us from the plays where a disillusioned apathetic man is suddenly inspired to Fight Back™) – no-one can call Tom Savage an idealised character. Nor does it painfully shoehorn in opinions the way I’ve seen other writers do this. The problem is simply the sheer number of views he tries to work in.

In the first act, I frequently found myself waiting for Tom Savage to stop expressing political views, not because of what he way saying, but simply so we could get on the with the story. However. it really became a problem in Act 2. Venetia Fitzpatrick evidently shares the views of her right-wing editor, but if this was a way of expressing some opposing views for Savage/Betts to argue against, it was a highly one-dimensional simplistic depiction. Look, people who supported the war in Iraq did so for all sorts of reasons, but – trust me – very few did so because they think Muslims are a backward race that need democracy imposing on them. But real problem is these argument go on far longer than is plausible. When Venetia decides she can’t go ahead with her editor’s honey-trap sting, would she really be in a mood to carry on arguing politics? And when Gary snaps and starts threatening to kill them all, ranting about his horrific experience in Iraq – seriously, would anyone with a scrap of sense try telling him Iraq was a good idea?

It’s such a pity I have to say this, because this production had so much going for it. Max Roberts seems to have done a decent job directing, all three actors put in excellent performances, and the two sets of the hotel bar and bedroom were two of the best sets I’ve seen Live do. But the most frustrating thing is that I know Torben Betts is perfectly capable of making a better play out of this. Had he resisted the temptation to cram in every opinion under the sun, he could have built a far more intricate and unpredicatble plot between the characters, as I saw him do with The Swing of Things. To be fair, I’m aware Torben Betts does not want to be seen as an Ayckbourn clone, and The Swing of Things did struggle to be something distinct from his then-mentor. But this seems to have gone from one extreme to the other, with an enjoyable but conservative/inoffensive play replaced by a bold play let down by soapbox overkill.

But I’m sure there is a happy medium to be found here. Political theatre is always guaranteed a rapturous response from people who already agree with what you’re saying, but if it won’t change the mind of anyone else, why bother doing it? The best political theatre, I’ve always thought, is the ones that makes people think, not just state what the author thinks. And with a long list of pre-election grievances off his chest, I’m sure Torben Betts can do this. Watch this space.