It’s that time of year again. In recognition of all the hard work of all the groups I’ve seen over the year, and in no way a shameless attempt to generate more web traffic for this blog, here are my list of awards. With a panel of one seeing lots and lots of plays over the year, a shortlist of plays was put forward and a jury of one spending hours deliberating over the verdict, I finally have a list of winners.

A few changes this year. For a start, I’m going to gradually announce the winners over five days in a completely unnecessary drive to build up tension. More interestingly, this year I’ve picked a runner-up for most categories, because I felt too many good plays would go unrecognised otherwise. Finally, I’ve added a couple of new categories this year: one is “Best collaborative work” to cater for the increasing number of devised theatre pieces I see that aren’t crap; the other, well, you’ll see when I get round to that.

Quick reminder of the other rules: this list is open to anything I first saw in 2015 – and what I see, especially at the festival fringes, largely comes down to luck. Productions I saw in previous years are generally not eligible for consideration, so that long-running successful shows don’t unfairly dominate the awards, although there will be one case here where I’ll bend that rule.

So, no more “didn’t they all do well”, it’s time to pick the winners. Okay, here we go … END_OF_DOCUMENT_TOKEN_TO_BE_REPLACED

Alphabetti’s Carols and Cocktails, is ambitious – maybe too ambitious – but a very bold choice for a December productions.

If there’s one thing 2015 will be remembered for in Newcastle theatre, it will surely be the setup of Alphabetti Theatre. This might sound like hyperbole, but honestly, they’ve become the venue of choice for all the small-scale groups in Newcastle, and they earned the wholehearted report of the city’s other theatres. Such an advancement from two years ago when they were an obscure even in an upstairs room of The Dog and Parrot. But do they put on good plays? Yes, if The Frights is anything to go by.

And so Alphabetti close their inaugural year in their own theatre with Carols and Cocktails. This is not, as the title suggests, an end-of-year social where everyone turns up for some, um, carols and cocktails, but a play. In this play, office IT workers Phil and John put on a show for the Christmas party, not because they’re particularly into this sort of thing, but because they want to impress the ladies (because playing in a band is cool yeah). Or rather, they both want to impress one particular lady, Carol. Okay, I think I’ve spotted the flaw in this plan. One other tip: if you must resort to reading a woman’s e-mails in the server room in order to find out her personal interests, keep that fact to yourself. END_OF_DOCUMENT_TOKEN_TO_BE_REPLACED

Alan Ayckbourn once suggested that the reason that you get very few working class people at the theatre is that they think they’ll be looked down on. I think he may have hit the nail on the head – theatre is a middle-class dominated pursuit, and for reasons I’ll go into shortly, middle-class writers and directors can be pretty clueless at depicting the working class. Even Ayckbourn himself doesn’t even try to take this on and plays it safe with the middle classes. But one playwright with a working-class background through and through is John Godber. He writes about this a lot, and he neither romanticises it nor disparages where he came from. From the simple expectations of a holiday in September in the Rain to the disintegration of mining communities in Our House to nightlife in Bouncers (nightlife, to be fair, is about equally hellish across the class spectrum but you get the idea), he’s a master of writing about what he knows.

But if there’s one change I’ve noticed in Godber in the last couple of years, it’s been that that’s he’s getting angrier – but not in the way you might expect. Whilst many writers have directed their ire at the bastard cuts from the bastard Tories, Godber has focused heavily on the very people who claim to be standing up for the working class – and yet look down on the people they’re meant to be standing up for. I first noticed this theme in Lost and Found two years ago, and now it’s back with a vengeance for Poles Apart. END_OF_DOCUMENT_TOKEN_TO_BE_REPLACED

Brave New World is one of of many famous stories of dystopian futures. But whilst books such as Nineteen Eighty-Four and Animal Farm had worlds that relied on crushing despotism, this was more passive and cunning method of subjugation, relying heavily on distractions and the suppression of any real emotion. Thank goodness it’s only a story, because the sinister means used include conditioning humankind to engage in meaningless casual sex, a terrifying prospect that strikes fear into the hearts of all- … okay, bad example. All right, they also subjugate humankind by banning texts that might induce too much emotion, so Shakespeare’s out the window – nope, still not getting the point across, am I? No Shakespeare, but everyone gets laid. Look, just take my word for it, it’s dystopian. END_OF_DOCUMENT_TOKEN_TO_BE_REPLACED 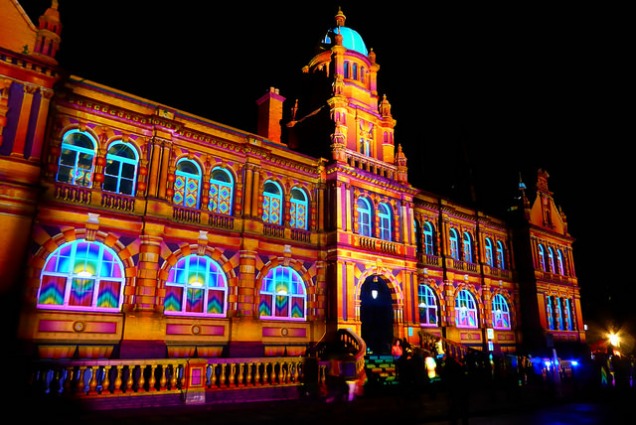 At last! My reviews backlog is under one month long, and this means I can turn my attention to the one non-theatre event I cover every two years, and that’s the legendary Lumiere. Back for its fourth biannual appearance, it’s once again been every bit the popular event it was expected to be.

This year, I was in the fortunate position of holding a gold card pass with possibly the most piss-poor claim to be “an employee of a city centre business”. So I had a perfect chance to get a good look at most things several times over the four days. It’s now nearly a month later and attention’s turned to that ghastly thing at the end of this month, but let’s have a look back at the festival and give my thoughts on it. END_OF_DOCUMENT_TOKEN_TO_BE_REPLACED 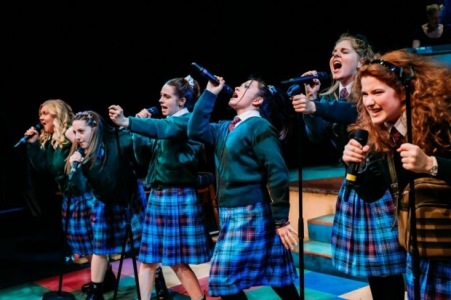 Faced-paced story, debauchery, coming-of-age stories, and live perfomances of ELO – could you ask for anything more? Well, maybe …

This offering from the National Theatre of Scotland might be a runaway hit, but I have a feeling that their fans won’t include the Catholic Education Service of the UK. Set in writer Alan Warner’s hometown of Oban (or, more fairly, a partially fictionalised version referred to as “The Port” in the original book The Sopranos), it begins at a school with an unusually high teenage pregnancy rate. But don’t worry, God told the Pope the perfect answer: give the girls of the town a sound moral upbringing by putting them in an all-girls school where nuns teach lessons that sex is a sin and the word “boys” is not allowed, because, like, that always works, doesn’t it?

Our Ladies of Perpetual Succour appeals to a lot of people in different ways, but the main audience for this play seems to be women with fond nostalgia of their youth. I’m not one of those people, because this is about as far removed from my teenage years as can be – I was more minded to sit through this debauchery with a middle-aged “harumph”. But for me, I instead got to enjoy marvelling at the extent of human stupidity – in this case, the stupidity of whoever thought this trip a choir contest was a good idea, bearing in mind it’s the first trip on their own for many of their girls. And it’s to Edinburgh, #2 city in Scotland for drinking after Glasgow, and #1 city for debauched hedonism. And to top it all off, with the contest not being until 6 in the evening, the girls are welcome to go off on their own for the day to see the city. Grief, what did they think was going to happen?