John Godber’s latest play Shafted might not be his most distinctive play, but it’s another thoughtful play depicting an issue he cares about. 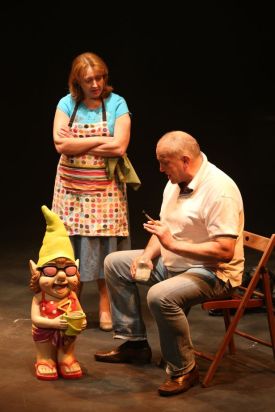 John Godber’s career has taken and interesting turn ever since he set up his own “John Godber Company”. After departing Hull Truck in a moderately acrimonious manner, he’s rebuilt bridges very quickly and happily tours there. He’s very supportive of amateur productions of his work when many other playwright are snotty about amateur efforts. But the most interesting development is the emergence of what some call a new “angry” Godber. I’m not sure I’d use the word “angry” myself – but his recent plays speak out on a lot of issues, and not whichever issues are the latest bandwagon, but whichever issues that are important to him. He particularly got my respect for Poles Apart where he challenges the disdainful attitude many supposedly left-wing artists have to the working class they’re supposed to champion.

But the Godber play that’s been getting the most attention is Shafted!, which, for a change, Godber wrote for himself and his wife to perform. It had a very successful run last year, and this year Godber and Thornton are on their lap of honour. This time, it’s about what happens to couple Harry and Dot after the defeat of the miners’ strike. But if you’re hoping it’s a platform for Godber to rant about Thatcher, this is not the play for you – although he’s broadly sympathietic to the mining communities such as the one he grew up in, he’s not interested in romanticising one side and vilifying the other. This follows what happens on a more human level.

So, what happens in Shafted? Quite honestly, the answer is “not a lot” – but that’s actually the whole idea of the play. Quite a lot of Godber’s plays are, on purpose, stories where people live their lives, have their ups and downs, but always carry on. There is no climax this play builds up to, no message hammered home, just three decades of a couple getting on with their lives. That’s not to say the aftermath of the strike is glossed over – for many years, Harry is a man who’s doesn’t know what to do with himself, who’s given up, who’s too prideful to take up a lot of other jobs, and it’s up to Dot to keep him going. Others aren’t so lucky – the backdrop of poverty and unemployment spreads way beyond this one couple, and there’s references to other ex-miners who give up so badly they take their own lives.

Things get better when Dot starts a B&B in Bridlington. She has to drag her husband kicking and screaming, only for him to discover he quite enjoys it once he’s got there. Even so, you can take a miner from the colliery but you can’t the colliery from a miner. Throughout the next thirty years, woe betide anyone who mentions they’re from Nottingham. Or a southern policeman. Oh yes, did you notice music that played between the scenes? Starts off with music from 1985, and you might think it’ll move on as time goes on – but you’d be wrong. All the music comes from that year. We can assume that twenty-nine years might roll on, but to Harry it’s always 1985.

The only trouble with this play – and this is a common complaint of Godber plays – is that it has a sameish feel against other Godber plays. For every thing I like about the play, there’s another Godber play that I think did it better. The gentle pace of plays in this style was best done in the beautiful September in the Rain, the portrayal of a disintegrating ex-mining town was unbeatable in Our House, and for me the most interesting play where he speaks on something important to him remains as Poles Apart. The main attraction of this play, I feel, is the Godber faithful getting a rare chance to see the (apparently) second most performed living English playwright tread the boards.

Still, there’s no denying that – even though he’s one of the most successful play writers and director – John Godber has never lost his touch as an actor, and neither has his wife. Shafted! is a nice thoughtful play that doesn’t get preachy, doesn’t sensationalise, and instead goes for an ordinary story that is similar the thousands of real ordinary stories. As long as you take the play for what is, you won’t be disappointed.