If Live Theatre and Northern Stage are serious about supporting artists who go to the Edinburgh Fringe off their own backs, there’s a little thing they could do which would mean a lot to them.

Last year I wrote an article around the opening of Alphabetti Theatre with a radical proposal that Live could follow in their footsteps and make theatre more accessible by using their undercroft as some sort of open access space. Looking back now, it’s interesting to see how things have developed. To some extent, this is a less important issue than it was because Northern Stage are now doing something similar by encouraging groups to use their Stage 3. Also, Alphabetti is saturated with bookings six months ahead, which shows just how much suppressed demand is out there. I’m increasingly coming to the opinion we can only balance supply and demand with a second Alphabetti-style theatre in Newcastle.

But forget about that for now. I want to make a completely different proposal for how Live Theatre can do more to support small-scale artists, and this one includes Northern Stage too. Unlike my last proposal, this is a trivially easy thing to do, it will cost nothing, but it will mean a hell of lot to some artists out there. Let me explain …

END_OF_DOCUMENT_TOKEN_TO_BE_REPLACED 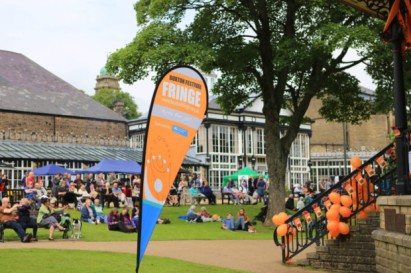 REVIEWS: Skip to: Skin of the Teeth, Lest We Forget, Samantha Mann, Jane and Lizzy, Jacques Brel: A life in a thousand words, The Beautiful Game, Women Who Wank, Hitting the Wall

And that’s it. Buxton Fringe is over and I can lift my embargo and reveal which shows I saw at Buxton were my favourites.  The big news, of course, wasn’t so much the show but the oncoming demise of of flagship venue Underground Venues. Redeveloping the entire Crescent building in Buxton has been talked about for many years, but little actually happened. This time, they’ve finally got round to actually starting the work, so it looks highly likely they’ll get round to changing Pauper’s Pit and the Barrel Room into a hot tub or something. I will at a later point write my thoughts on what might emerge as a replacement venue – in the meantime, you can read this article from three years ago when they first said it was their final year.

For the plays themselves … not my best year, to be honest. The plays I caught from my recommended list delivered, but the best thing that happens on a fringe is when I see a play I know little about that turn out to be outstanding. For me, whilst there was merit in the new plays I saw, there wasn’t anything I saw that really jumped out at me. There again, this was an unusual year with many plays I saw from the theatre section only debatably counting as theatre – and, as such, it was difficult for me to review this as a theatre piece. END_OF_DOCUMENT_TOKEN_TO_BE_REPLACED

Hot on the heels of two excellent plays, The National Joke is a decent play – but an avoidable flaw stands in the way of a hat trick. 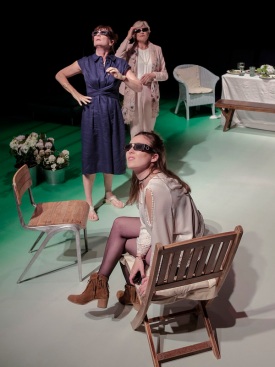 Perhaps I’d set my expectations too high. At the start of this year, I’d seen one good play and one so-so play from Torben Betts prior to 2016, and then I saw two great plays earlier this year: his adaptation of Get Carter for Northern Stage, and the Original Theatre Company’s tour of earlier success Invincible. It was the latter play that gave me the most hope: Invincible was a comedy that sharply observed the attitudes some middle-class socialists hold of the real working class which was funny and astute without getting preachy. Work this magic on this play, this time set at the other end of a political spectrum, and there’s be every reason to believe this should be such a success.

And for the first three quarters of the play, I kept the faith. Out goes a grotty northern street and in comes the home of a Tory MP so extravagant it makes moat cleaning and duck islands look positively frugal. Still, that’s all so last decade. How Rupert St John-Green MP really stands to grab the public’s attention is a performance that could have been scripted by Andrew Mitchell himself. Taking a break from watching a solar eclipse in his home, he wanders on to the nearby beach and ends up giving a most, shall I say, “memorable” exchange with a group of disaffected constituents. Rupert of course strongly denied calling them “proles” – he insists he used nothing stronger than “oiks” – but luckily it’s been filmed and put on YouTube so that the entire country can make up their own minds. END_OF_DOCUMENT_TOKEN_TO_BE_REPLACED

Last year, one low point of the festival fringe season was a play that, according to the one-star review, trivialised rape. I’m not going to name it because I don’t like kicking small productions any more than I have to, but anyone who heard about it will know which one I’m referring to. Now, I’m not one of these moral authoritarians who thinks that anyone who tells a rape joke must be publicly castigated as an irredeemable misogynist; it’s not unusual to put humour into the darkest of subjects. I think a good test to apply is to ask yourself whether the joke was the rape is bad, or that rape is funny. However, it sounds from the review like this play was firmly in the latter camp. I can’t make a fair impartial judgement without seeing the play myself, but if it’s anything like the review described it, I would have given it a one-star review too.

But when we pan a play for objectionable content, we should at least ask ourselves if we’re being consistent with our moral standards. In the case of a play that trivialises rape, it’s only fair to ask whether we apply the same standard for other equally abhorrent crimes. There’s really only one crime that gets the same public revulsion as rape, and that’s murder. And here’s where we hit a problem. We collectively make little or no effort to speak out against the trivialisation of murder on stage or screen – and in some cases, it is actively encouraged. END_OF_DOCUMENT_TOKEN_TO_BE_REPLACED 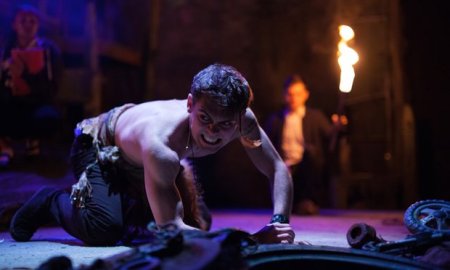 Short Stories are often ideal pieces to make into plays – but the signature touch to David Almond’s stage adaptation of The Savage is Live’s staging of it.

With the opening of Live Gardens next door and with it Live Tales, their writing centre for children and young people, it’s little surprise they’ve chosen to adapt a children’s story for their main production. A lot of people get sniffy about adapting children’s books for an adult audience, but these tales are often ideal for an adaptation. The bane of adapting novels is that it’s very difficult to adapt anything over 200 pages without making massive cuts to the story; but this means that easy-going story length of books aimed at children or teenagers suddenly becomes ideal when transplanted to the stage.

The other things about children’s stories is that the best ones are a lot darker than grown-ups give them credit for, and David Almond’s graphic novel The Savage is no exception. The central character of the story is a boy only known as “Blue”, in the aftermath of the sudden loss of his father. A teacher tries to get him to embark on creative writing, but his mind isn’t on this – until Hopper comes along. Hopper has also lost his father, in his case to prison, and we will in time discover he is just as unhappy, but for now Hopper disguises this by tormenting Blue about his own father. So Blue comes up with a story about a “savage” who lives in a hole and kills people who get to close to him. The origins are vague – perhaps Blue considered Hopper a savage, or perhaps a savage was a fate Blue wished on Hopper, but Blue ends up finding his own self burring with his creation.

But whilst this would be a good choice for any theatre to take on, it was especially a good choice for Live to do this – and not just because it happens to be set on Tyneside. Being a new writing theatre, there is inevitably a hit-and-miss element to Live’s plays, but the thing I’ve found consistently good about them is their sets. They rarely settle for a merely functional set and there’s always something about them that catches the eye – the dive of a nightclub in Our Ladies, the (metaphorcally) crumbling household in Geoff Dead, the disappearing wall in Iris, and even the eye-catching generic set for Elevator are things that spring to mind. This one has to be seen to be believed: at first glance it looks like a Stig’s tip from Stig of the Dump, but this is in fact a multi-purpose set covering Blue’s classroom, bedroom, the quayside, and everything in between. END_OF_DOCUMENT_TOKEN_TO_BE_REPLACED

Slightly later than usual, my roundup of assorted things that have been going on in the last month. Busy sulking over that vote. Arse. Plenty of speculation buzzing around over what this means for the arts, but until we have a better idea of what’s going on, it’s really all guesswork. It will almost certainly have some sort of effect, direct or indirect, but that’s something for anything day.

So sorry for depressing you all by bring up this subject. Let’s have a look at stuff that’s been going on that doesn’t involve political or economic Armageddon just yet. END_OF_DOCUMENT_TOKEN_TO_BE_REPLACED

Eeek. Whilst I’ve been catching up on the Brighton Fringe roundup, Buxton Fringe has been creeping up on me. Better get these recommendations out of the way. I’ve looked through the programme and found six things that stand out for me in theatre. The big news, as I’ve previously reported, is that it looks like this year really will be the final year of Pauper’s Pit and the Barrel Room, arguably the main venue in Buxton.

As always, these recommendations are almost entirely based on the previous performances of the groups involved. Even though I now know quite a lot about who the Buxton regulars are, there are many groups I still haven’t had a chance to see, including some I’ve heard some good things about. So, bearing in mind this is a non-exhaustive list, here’s what I have for you: END_OF_DOCUMENT_TOKEN_TO_BE_REPLACED