Yes, I know, it’s almost November. This is quite embarrassing., especially as I saw two of these on press tickets. I have a sort-of excuse that I’ve had my usual Edinburgh Fringe backlog combined with a couple of projects of my own that kept me busy. But no more excuses, let’s get a move on. Saw a quite a lot of small-scale productions over the north-east, all of which deserve feedback, so I’d better make a start. I had quite a busy September with five local fringe productions seen, excluding mine.

Remember, I only review stuff that has merit. It might be what it is now, it might be what it could become, but if I I think you play is irredeemably poor or inescapably mediocre, I won’t be reviewing it at all. plays are listed in chronological order, so don’t read anything else into that. Anyway, here we go.

Beyond the End of the Road

This wouldn’t normally go into my reviews because I generally don’t review scratch performances. It might influence whether I choose to recommend the final product when it comes, but I normally prefer to deliver a verdict on the final product. However, I’m going to break the rule here because this work in progress from the November Club shows lots of lots of promise.

In a rare break from precedent, this is a north-east theatre group not based in Newcastle; The November Club are instead based in Morpeth. Admittedly, they have imported a lot of the talent from Newcastle; they’ve got a lot of big guns from the Newcastle scene, such as part of The Letter Room (Northern Stage’s first company they set up under the NORTH scheme), and Laura Lindow who has directed many acclaimed productions including Donna Disco. The most high-profile local name is Katie Doherty, who was very heavily Newcaslte-baed but now lives in Northumberland. Crucially, however, this isn’t yet another Newcastle-centric clique painting the entire north-east as generic suburbs of Geordieland. This play, set in rural Northumberland, has made a lot of effort to speak to the communities where the play is set. It seems to me like they’ve done a good job with a convincing depiction, but I should really defer judgement to the Northumbria locals who saw the preview, who gave it a resounding thumbs up. END_OF_DOCUMENT_TOKEN_TO_BE_REPLACED

Back in 2013, when it was announced it would be the final year that Underground Venues would operate out of Pauper’s Pit and the Barrel Room in the Old Hall Hotel, I wrote this article on what might happen next. As you may have noticed, nothing happened, and the in-joke that every year was Underground Venues’ last year ran on and on. However, the mood this year is that this time the developers really mean it and they want to convert the entire basement into a hot tub or something equally fancy. So unless everyone wants to set their plays in hot tubs, we need to look at where else they can go.

Joking aside, this is something that Buxton Fringe ought to be worried about. In recent years, applications to Underground Venues have gone up and up and up, but the numbers to Buxton Fringe overall have remained steady. So it looks like there are a lot of unsuccessful applicants who are opting for not come to Buxton at all. For one reason or another, it’s Underground Venues that everyone seems to love. It might be because of the community and spirit that’s been built up, or it could be that this is the only space with a proper lighting and sound system (apart from the intensely-contested Arts Centre). The apocalyptic scenario is that the loss of Underground Venues spells the loss of everyone who performs there. If that was to happen, this would decimate the theatre and comedy programmes at Buxton – the Buxton Fringe would still have a strong visual arts and music section to fall back on, but it would still be a huge loss. END_OF_DOCUMENT_TOKEN_TO_BE_REPLACED 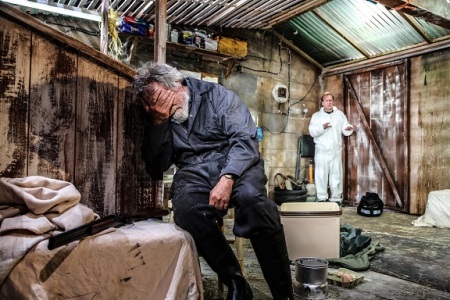 Bea Roberts’ And Then Come The Nightjars could have been moving play set at the hight of the foot and mouth crisis. Instead, it’s so much more.

Paul who? That might be the reaction to anyone thinking of seeing this touring production from Theatre 503, with Paul Robinson seen as just another director of just another touring company doing just another two-day run at Live Theatre. But if you haven’t heard of Paul Robinson, you will soon. He’s the new artistic director at the Stephen Joseph Theatre. So far I’ve only been able to speculate what he’ll bring, but now we had our first proper clue. For better or worse And The Come the Nightjars is likely to be the shape of things to come at Scarborough.

Set in Devon at the height of the second foot and mouth crisis, this two-hander is the story of Jeff, a vet, and Michael, a farmer. Writer Bea Roberts draws very heavily on her own observations of rural Devon, and one of many observations is how often farm vets visit farms and become good friends with the farmers. They end up chatting one night – ant then come the nightjars. There’s a superstition that the coming of nightjars fortells the coming of death. The nearby outbreak of foot and mouth is mentioned only briefly, but it’s clearly something that weighs heavy on Michael’s mind. A more detached observer might think that, with the compensation regime better than the days of the 1967 outbreak, a farmer like Michael could make a fresh start if the worst happens. And maybe it is. But money is the last thing on his mind. The herd is his lifetime’s work. His pride and joy. His herd is practically family to him; he always refers to his cows as “my girls” and give them all names. END_OF_DOCUMENT_TOKEN_TO_BE_REPLACED

Okay, this is going to be a shorter list than usual, maybe because everyone has a breather after the Edinburgh Fringe. But that’s okay because I have a shedload of reviews to catch up on myself, so the sooner I can zip through this, the better.

Stuff that happened in September:

As I said, limited theatre stuff, but a couple of things elsewhere in the arts world that grabbed my interest. Starting with the theatre stuff … 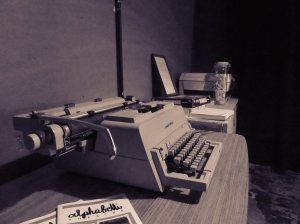 It was a “Save Alphabetti Theatre” crowdfunder that came out of nowhere. In spite of a very successful first 18 months, it was announced out of the blue (well, nearly out of the blue – the fact that the event at which is was announced was called a “fundraiser” was an early hint) that Alphabetti was facing closure if it didn’t get more money. A Kickstarter fund was launched with a £2,500 target, but luckily for Alphabetti, they’ve earned themselves a lot of supporters, because they raised £6,300 (and, interestingly, a lot of backers come from outside the north-east). Together with a whip-round at the original fundraiser that made it £7,100. The Kickstater was only one part of the fund-raising, and the overall target was more like £10,000. It’s not a hard and fast figure – this doesn’t mean that £9,999 means closure but £10,001 means Alphabetti forver – but that’s roughly what they need to clear their debts. But with organisations up and down the country wanting to chip in – another sign of how good a job Alphabetti’s done building its reputation – it looks like this target will be reached. END_OF_DOCUMENT_TOKEN_TO_BE_REPLACED