Are you guys recovered from fringe season yet? I haven’t. Just when one project finishes, along comes another. And I’ve still got a month’s backlog of reviews. Never mind, should have a quieter November, Then it’s my forced break in December when it’s sodding panto season. Oh joy.

Hmm. Still seems to be a relatively quiet months. Only four things to report, and two of them aren’t really new. Never mind, here we go.

Yes. Already. Preparations for 2017’s fringe season are properly underway. At this stage, the big thing to look out for is venues. Who’s new, who’s expanding. The most attention at this stage goes to the super-venue though. With Brighton increasingly dominated by the giants of The Warren, Sweet and Spiegeltent, the decisions they make will shape the festival as a whole. 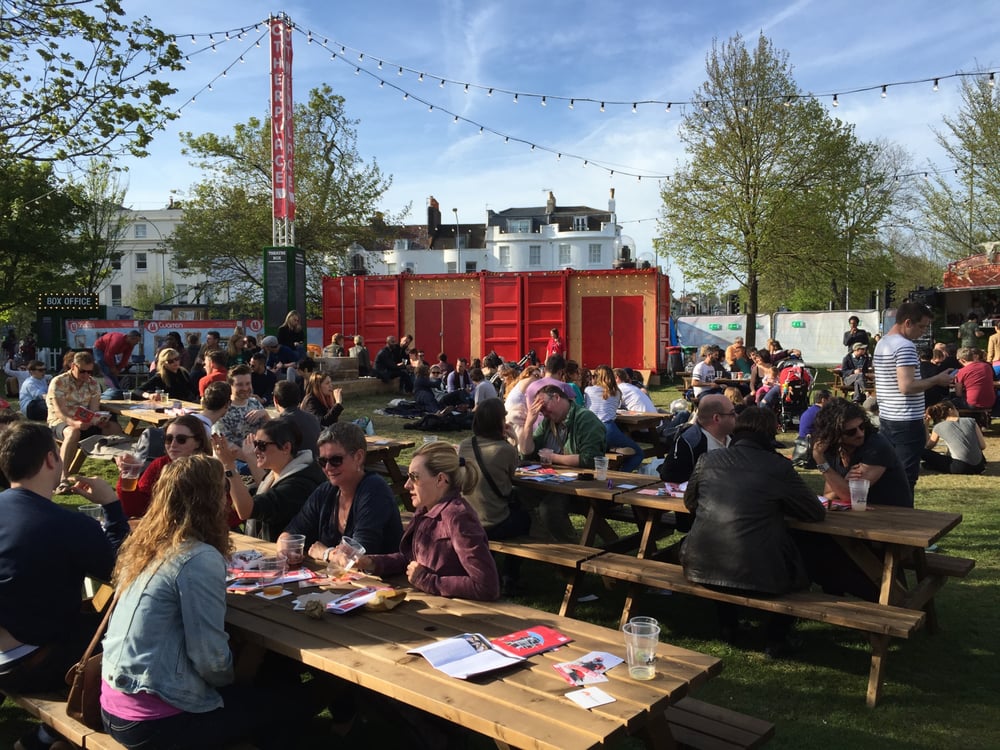 At The Warren, I’d say the first big question is whether they will persist with a single pop-up site like they did for 2016. It was certainly successful as a social hub of Brighton Fringe, but the one thing that was an absolute menace was noise bleed. If the merry revellers outside weren’t enough to distract you, the traffic noise from the A23 was. Might they take a new venue away from the noise? At the time of writing, their website says: “The Warren will return in 2017 with New Venues, Festival Bar and Rooftop Bar, Kids Area and Market Town.” So, hints of new venues, but what kind? Best clue on their site is “an excitingly re-imagined version of Studio 2”. That suggests they may not be looking at an off-site venue, and it’s hard to see how a re-imagined Studio 2, however exciting, will solve the noise bleed problem. No date set yet for applications opening for The Warren, but once they do, we should have a better idea of what’s going on.

Sweet Venues are definitely returning to Brighton, because some shows are already announcing bookings for the fringe. Website is yet to be updated from last year, but the Brighton Fringe venue finder is showing the same four spaces as last year, so I think we can safely assume they will remain running in the Dukebox, St. Andrew’s Church and the Waterfront Hotel. Now, will they persist with the week-long runs they encouraged everyone to do last time round? That only had limited success, with a major stumbling block being that reviewers were supposed to come early in the run and publish review mid-week; whilst in reality getting a review out during a week-long run at all was a dubious proposition. Or, if if they stick at it, will reviewing publications adjust to this and try harder to get reviews out in time? A lot riding on this.

However, one notable absentee from the venue list is Republic. There’s also been no updates to their Facebook or Twitter pages, so I think we can safely assume they are a casualty of the increasingly intense competition between the big players. I guess this town ain’t big enough for two Spiegeltents.

Also keeping a close eye on Buxton Fringe registration. That opens on December 1st. No word yet on which venue, if any, will be stepping into Underground Venues’ shoes. After registration opens, however, surely we’ll be hearing something. In the meantime, you can read my speculation here.

Okay, this was confirmed some time ago, so I’m a bit late to the party, but better late than never. After I wrote my roundup of Vault Festival 2016, I was quite surprised to come across this event suggesting that we need to work together to save Vault Festival. I’d just assumed that this was an easily viable festival, by virtue of the fact that there’s nothing else viable you could do with the arches under Waterloo station, but apparently not. Evidently, it’s been a struggle. Even Vault 2017 had a big question mark hanging over it.

Well, whatever trials and tribulations might be going on behind the scenes, Vault 2017 is going ahead. Applications have opened and closed, so there’s no going back on it now. That doesn’t necessarily mean it’ll be safe into 2018, but for now, Vault lives to fight another day.

I intend to go for another stint when it comes (it’s the only available antidote to Fringe withdrawal that time of year), although I’ve not yet fully made up my mind on this festival. You can read about my reservations in my roundup if you want, but my main doubts is over the curated element of the festival. I like my arts festivals open, where anyone can take part and audiences can choose who to see. I accept this is not an option for Vault because they’ve a limited number of spaces, but I wonder if they’re imposing their own artistic tastes too much, because I didn’t pick up much stylistic variety compared to open festivals. Or it could simply reflect who’s applying for the festival. And I know of two excellent shows that started there. Do a good job for me, okay?

Last month, I (and everyone else) reported on the difficult financial situation Alphabetti Theatre faced. Thankfully, before I’d even started covering this, there was already a massive groundswell in support, with people chipping in money left, right and centre. I don’t think anyone expected it to go that well. Anyway, halfway through October NARC magazine published this interview with Ali Prtichard. Headline figure at the time of publication (11th October) is that out of the target of £10,000, £8,000 had been raised. Surely the last £2,00 is on the way, although as I said before, the focus now should not be on a one-off fundraiser, but a more sustainable day-to-day model.

The whole article is worth a read because it’s got a lot of interesting info about how this current venue evolved via the upstairs rooms at the Dog and Parrot. But the one thing I hadn’t realised was that the £10,000 debt was not debt to the theatre, but debt to Ali Pritchard personally. Had the theatre closed, he would still have been liable. That doesn’t seem right to me. Okay, no theatre should be a sacred cow, but Alphabetti has done a lot of good way beyond providing a performance space for themselves. Maybe projects like these need more public funding. Or, if that’s not possible, perhaps some sort of loan guarantee needs to be explored. Exactly how this would work and who would pick up the tab, I don’t know. All I know is expecting individuals to borrow thousands of pounds for projects like this is way too much to ask.

The strange war over the Globe Theatre

This saga has passed me by, until this all came to a head last year when the Globe Theatre announced the departure of the recently-appointed artistic director Emma Rice. As someone with limited interest in Shakespeare I don’t really have strong feelings on this, but the reaction that’s blown up over this shows a lot of other people do. Anyway, from an outsider’s perspective, the row seems to be using the Globe for multimedia-heavy Shakespeare productions in a theatre whose intended purpose is to recreate how Shakespeare’s plays would have originally been performed. To some extent, I can see where the board is coming from: if a new artistic director is undoing the achievements of the old one, the board is within their rights to put its foot down. Whatever the rights and wrongs, her tenure has been controversial, with everyone either loving or hating what she’s doing. 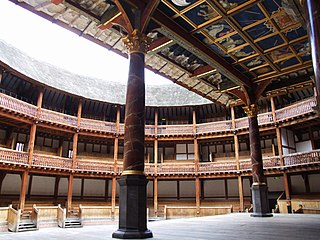 But here’s the thing I don’t understand: why should it be a choice of one or the other? The reaction of many Emma Rice fans is close to saying that authentic Shakespeare should not be performed at the Globe at all, whilst fans of authentic Shakespeare don’t seem to be allowing any room to try something different. Why not have both? Plenty of theatres are perfectly capable combining doing what they do best with more innovative productions. The Stephen Joseph Theatre, for instance, is embarking of a new writing-heavy programme under the leadership of its new artistic director Paul Robinson, but they still produce new and old Ayckbourns to an exceptional standard. It’s not like shared light and lighting-intense Shakespeare are in particular competition at the Globe – authentic Shakespeare is best done during daylight, multimedia-heavy Shakespeare is best done without, for obvious reasons. Seemed like a pretty easy dispute to settle, so very strange a compromise wasn’t found.

However, the even bigger puzzle is why, if Emma Rice and the board are at odds on such a fundamental aspect, she was appointed artistic director in the first place. It’s conceivable that an artistic director who’s been in post for several years could get too big for his or her boots and go off in a new direction without asking anyone, but how is that possible for someone recently appointed? Surely the first thing any board of trustees would ask candidates is what they’d intend to do as artistic director, and one would think something as far-reaching as installing lighting and sound into a shared-light theatre would be discussed. If so, I can only see two possibilities: either Emma Rice was economical with the truth over her plans when she applied for the job, or the board knew perfectly well what her plans were but turned on her when the bad reviews came in.

I’ve no idea what’s really going on – the only thing I’m certain of if that the story we’ve been told isn’t the whole story. Someone is behaving shabbily; it’s just not clear who.

Stuff I wrote in October

Whilst that was going on, I wrote this things. Most of them embarrassingly late.

And Then Come the Nightjars: an unexpected friendship: Paul Robinson’s final Theatre 503 production going on tour. Bodes well for his newly-started post as artistic director.

And I’ve also been adding to my Edinburgh Fringe 2016 roundup. Sorry for the backlog, but it should start to clear now. See you in December, when I might just have finished catching up on October.