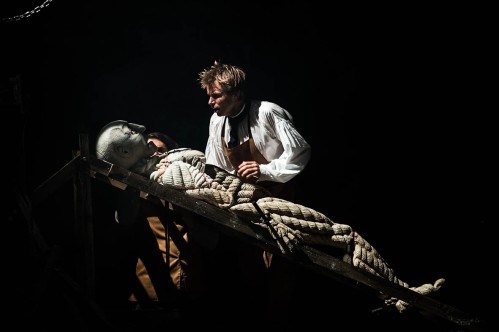 Faithful to the book, innovative to stage yet shunning electronic wizardry, Blackeyed Theatre’s take on Frankenstein outshines the multimedia extravaganzas.

Technology has transformed theatres. There was a time when the only way to get music of a decent sound quality was to bring your own orchestra along, a sound of a thunderstorm has to be done with complicated off-stage equipment, and lighting was a complicated affair only possible in the bigger theatres. Nowadays it’s possible to to achieve all this even in the smallest fringe theatre spaces. Such is the advance of technology it’s easy to forget there was once a great art to staging plays without electronic wizardry. Not a better way or a worse way, but something different.

But one group who doesn’t want to let this go is Blackeyed Theatre. This groups does a range of plays in a range of styles, but this particular brand first appeared in 2013 when a team led by director Eliot Giuralarocca did Dracula. It was a small-scale production with a cast of five and no sound effects other than what the actors produce on stage, and apart from one bit of over-ambitious doubling (that caused Van Hesling to have a fight with Dracula played by the same actor), it was a good production in a refreshing style. Now the same team is back with Frankenstein. They’re still faithful to the book, still using a small cast, and still have no sound other than what they’ve done a stage – but they’ve built on what they did in Dracula, and gone from a good adaptation to an outstanding one.

Mary Shelley’s book occupies an odd place in literary history. It is arguably the first significant work that could be considered science fiction, pre-dating Jules Verne and H. G. Wells by a generation. It has far more in common in the later stories of Messrs. Verne and Wells than gothic horrors such as Dracula, and yet somewhere along the line Dr. Frankenstein was remodelled in popular culture from a young man getting out of his depth in his research to a deranged white-haired mad scientist with a brand-new hunchbacked sidekick name Igor who goes “Yes ma-ster.” And yes, I’m fully on the side of people who stand up shouting “NO, YOU IDIOTS! FRANKENSTEIN WAS THE CREATOR, NOT THE MONSTER!” Honestly, this was a key part of the story, after the creature goes on the rampage he tells the captain that he was never given a name.

Luckily for the eardrums of the souls sitting in front of me, Blackeyed Theatre stay very faithful to the book. Victor Frankenstein remains a well-meaning young man regretting his work the moment he does it, and the creature remains an anguished creation unloved by the world, and worse, the man he considers his father. Once again, a cast of five is enough to tell the story. Even though the play sticks to the original format of a dying Dr. Frankenstein telling Captain Walton his tale of an invention that destroyed him and all he loved, there is little need to rely on narration, with all the key scenes acted out. The assignment of parts to actors is logical and avoids any confusing doubling this time round.

But whilst their might not be much room for creativity when you faithfully re-tell a story, Giuralarocca and co put no end of creativity into the staging. On the one hand, they use established theatrical techniques such as the multi-purpose set. At first the set of a ship, this later forms every scene in the story, the greatest effect being taking away the sale/curtain the reveal the complete creature. A mostly percussive entirely acoustic musical score superbly evokes the atmosphere of the story. One annoying unintended effect in Dracula was the odd scene that should have been the height of tension coming across as comical and getting laughs. This time, thanks to the music as much as anything else, the tension is perfectly managed from start to finish. The only tiny niggle I had was that in the first scene, Dr. Frankenstein seems a bit too lively for someone about to peg it, but other than that, it was flawless. 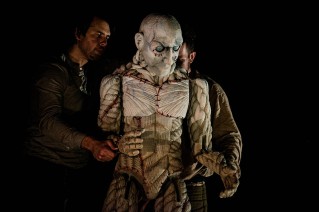 The master touch to the play, however, was Yvonne Stone’s a life-size puppet for the creature. I’m usually wary about praising plays for a single aspect that the group have been banging on about in the pre-tour publicity, because often it turns out to be a single good theatrical device compensating for an otherwise mediocre production. I have no such reservations here, because this would have been a good production without, but the puppet and puppetry added so much to it. One vital aspect for the story often forgotten in the cheesy gothic films is that the creature – for all its destructive rage – has human sentiments at its heart. It’s vital to have puppet moving just like a real human would, and that’s just what they do.

There seems to be a move amongst some right now – maybe fuelled by a well-publicised spat at the Globe Theatre – that theatre is only innovative if it’s made into a multimedia extravaganza. Anything that fails to make use of modern sound and lighting techniques is dismissed as unoriginal. Blackeyed Theatre’s Frankenstein shows that this could not be further from the truth. The 2016 tour has now finished, but fear not – the 2017 tour is about to begin. Mid-scale theatre productions are easy to overlook as not as flashy as the megaproductions touring to Newcastle Theatre Royal and Sunderland Empire, but not as experimental as regional subsidised theatres such as Live and Northern Stage. If you have any of these misconceptions, stop thinking this and catch the show next year. Blackeyed Theatre will show you what you’ve been missing all this time.

Frankenstein‘s 2017 tour commences in late January and takes in Harrogate Theatre on the 2nd-4th April, Leeds Carriageworks on the 3rd-4th March, and Bishop Auckland Town Hall on the 18th March.