Right, no more quips about how big my backlog of reviews is. It’s January and there’s four fringe plays standing between me and a backlog of zero. This is going to be a little different to previous roundups of this kind, which isn’t quite as local as, nor as fringey as before. Here we go.

Between a Man and a Woman

So, here’s a rare departure on this blog: a review of a London fringe play. For some reason, I keep getting invited to review London fringe plays even though I live nowhere near London. By  staggering co-incidence, however, I happened to be in London (filling my annual craving for infrastructure geekery whilst tickets to London are stupidly cheap) during the run of this play from JamesArts productions. So London folk: even though I don’t live in London, feel free to give it a go. You never know your luck.

As the theatre company name suggests, this is written by Scott James, and as the name suggests, this is a play about domestic violence within a marriage. The play begin with Tom and Polly talking excitedly about the wonderful time when they first met. Fast forward to now, and it’s a different matter. Polly’s sister is sure something’s not right about their marriage, but as someone who took a natural dislike to Tom from the start, however, her husband and other suspect believes what she wants to believe. However, she was right the first time, and when Polly starts seeing less of her sister – under pressure from Tom who ruthlessly exploits the notion that she’s got it in for him – suspicions begin to grow. END_OF_DOCUMENT_TOKEN_TO_BE_REPLACED

Never satisfied with just another undemanding Christmas show for children, Northern Stage’s James and the Giant Peach is up there with the West End shows for its production value – and on a fraction of the budget.

So, here’s a new thing on this blog – a review of a show aimed primarily at children. I’ve previously reviewed family shows that have also been very popular to adult audiences, but now that I have a nephew and niece who are old enough to go to the theatre it’s time to rediscover this. I will declare at this point, I am a certified pantomime-hater. I accept they are necessary to keep theatre solvent, but I just found them depressingly garish and formulaic, especially the big commercial ones who rely primarily on big-name celebrities from soaps I never watch. If anything, the pantomimes I liked the most as a child were the ones my local amdram society put on. They were sometimes great and sometimes dire, but they were always fresh and original.

Anyway, in a pre-emptive move to ward my nephew and niece off horrible formulaic celebrity-driven pantomimes, I took them to see this year’s Christmas production at Northern Stage, James and the Giant Peach. This is not a straight stage adaptation of Roald Dahl’s classic book, but an ambitious musical adaptation from David Wood. I’m not going to give a blow-by-blow appraisal of the show, because other people are far better experts of children’s shows than me. But what I can comment on are the production values. On that front, it blows the competition from commercial pantomimes out the water. In fact, the production values are comparable with those of a touring West End production, if not better.

END_OF_DOCUMENT_TOKEN_TO_BE_REPLACED

I know you’re all dying to get stuck into 2017 and maybe your optimism’s buoyed by no-one of David Bowie’s calibre having died yet, but one final thing to close off 2016 is a retrospective of what you guys read the most on my site. Always interesting to see what interested you the most.

Most read articles written in 2016

So, what did I do last year that raised eyebrows one way or the other. I’m going to exclude roundups of festival fringes here because they’re at an unfair advantage for obvious reason, but apart from that, what grabbed your attention.

(Obvious caveat: by “most read” I mean pageviews, as measured by WordPress. I have no way of knowing if you read the whole article or got bored by the third sentence. Also bear in mind that articles posted earlier in 2016 have had more time to rack up views than ones published later in the year, although the most-read articles tend to have the most pageviews shortly after publication.)

Most read new comment piece: I write on a variety of issues, some contentious, some mainstream, but I’ve never been able to predict what gets the most attention. 2015’s most read comment piece about Richard Herring got the top spot after a retweet from the man itself. However, this time round the most read article was almost entirely found by Google searches: Why E4’s Stage School is all your fault, where I suggested that the blame for such an appalling depiction of actors must be shared by the people, actors and otherwise, who’ve watched programmes with Made in Chelsea before. Seems there’s a lot of interest from the arts world in this abomination. Only thing I don’t know is where this article was read by people who agree with me or people who think Stage School is the best piece of telly ever. No death threats received yet, but digging my bunker just in case. END_OF_DOCUMENT_TOKEN_TO_BE_REPLACED 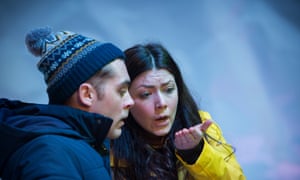 The most remarkable thing about this studio piece at Live Theatre is its critical reception. I  don’t often mention other people’s reviews in my own reviews (most of the time, I avoid reading the other reviews completely to avoid influence on mine). However, this time the acclaim was unprecedented. Five stars from the Guardian. Local reviews need treating with a bit of caution, but it’s big achievement for any play to get that rating in a national newspaper; for a studio production from a first-time writer to get it (let alone get a reviewer up at all), it’s phenomenal. END_OF_DOCUMENT_TOKEN_TO_BE_REPLACED

I’m not quite done with 2016. I’ve got three final shows performed very close to Christmas that need reviews (two of which you can work out from the last article, the other which you can work out with a bit of sleuthdom), but 2017 is already underway and I’ve a whole new list of recommendations to go through. It’s a long one this time. My lists might be getting longer because I’m getting to know more good theatre companies, but there’s also quite a bit of good stuff coming from the usual suspects.

To save me repeating myself every time, I’ve written up a Recommendations Policy to explain how this works. Please bear in mind that I make the rules up as I go along and what I said yesterday might be wildly out of date next week. If you can’t be bothered to read through that, the only thing you need to remember is that this is a cross-section of the good stuff out there, not an exhaustive list.

So what can I recommend for you? END_OF_DOCUMENT_TOKEN_TO_BE_REPLACED