SKIP TO: Around the World in 80 Days, The Rise and Fall of Little Voice

Apologies to everyone who’s been waiting on reviews – I have been directing a play which just went insane with its workload, and I’ve had little time for anything else. But I’ve finally got this out of the way, and I’ve manage to upgrade  sanity level up from “gibbering wreck” to “slightly less gibbering wreck”. So now’s as good a time as any to catch up, in a sort-of chronological order.

So, in early July, I caught two plays in the round as part of a round trip involving the Buxton Fringe launch, a visit to a sister and a photo stop in the Pennines. Both were high-profile shows and both are revivals, so there’s little need for me to give either constructive advice or encourage people to come along, but here’s my verdicts nonetheless.

Around the World in 80 Days 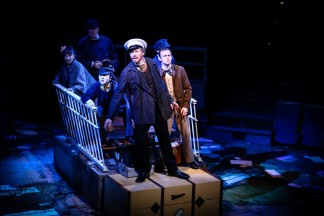 Jules Verne’s famous circumnavigation-themed novel is a tough to to adapt faithfully. So detailed is the story that it’s next to impossible to capture the train-by-train-by-boat-by-train-by-elephant etc. epic in that level of detail. In fact, one of the biggest oddities is that some people consider the most accurate adaptation to be the 1980s children’s series Around the World with Willy Fogg. Even though all the characters are animals and they introduced extra characters such as the sneaky master of disguise wolf Transfer who tries and fails to sabotage the journey every episode, the 26-episode format meant the whole journey could be captured very faithfully. But this is theatre, where you have two and a bit hours, trains and boats on stage are not an option, and getting a lion to play Mr. Fogg is unworkable for several reasons.

So writer Laura Eason and New Vic artistic director Theresa Heskins rise to the challenge with an adaptation with highly energetic, light-hearted, but still stays faithful to the story with all the important plot points left in. Beginning with a repeated sequence where Phileas Fogg goes about his day – pretty much the same day every day – he is drawn into an argument over the practicalities over travelling the globe, which swiftly escalates. In spite of barely having left London as long as anyone can remember, Phileas trusts in knowledge of worldwide rail and boat timetable and wager he can get around the world in 80 days. New servant Passpartout joins him on the train from London, and a zipping through the European leg in minutes (French trains: lots of berets and smoking; Italy: boisterous passengers in straw skimmers laughing and eating ice cream), we soon arriving at the Suez Cancel, where Inspector Fix recognises Fogg as the man who robbed a London bank. Putting two and two together and making eight-seven, he deduces Fogg is using the round the world malarkey as cover to leave the country (because, like, travelling round the world back to the country where you committed that crime totally makes sense), and vow he won’t rest until he’s got his hands on that reward, I mean fugitive.

The solution to the logistics of bring train, boats and elephants on the stage, is, of course, to not have them. This plays into one of the strengths of theatres in the round. In a conventional theatre – especially the high-end West End venues – one might expect problems like this to be solved with uber-flashy uber-expensive set and special effects. But in the round, you can’t have a set, uber-expensive or otherwise, so solutions of simpler means must be sought. Some end-stage theatres master this too, but the New Vic has this down to a tee, with suitcases, trunks and railings forming a whole manner of vehicles and places. With a multi-talented cast culminating in a circus show to introduce the second half, the whole performance is a delight to watch.

The only change I spotted was that Fogg’s companion across India changed from Brigadier Francis Cromarty to Mr. Naidu: a tweak, presumably, to work better with the multi-racial cast needed to play the entire world, but that straight character-swap worked fine for the story. Most importantly, I was pleased how Laura Eason has captured the character of Phileas himself. A play could work with Mr. Fogg as a bland stock character driving the journey, but half the story is his own personal journey. Leaving London as a respectable gentleman with an interest in transport, only to find himself from India onwards with an additional duty to see Princess Aouda is taken care of, whilst doing his best to hide his own feelings for her. That and more came across in the play very well.

The only niggle I had was that it got a little too hammed up on laughs and razzmatazz by the end. When you have a scene where Fogg is facing ruin but finally realises there’s something more important in his life sitting next to him, it spoils them moment when people in the audience go “Aww”. But that’s a small detail in a production that’s a hit in Stoke for a very good reason. It’s on a tour now, so if it’s coming your way you’d be glad to catch it.

The Rise and Fall of Little Voice 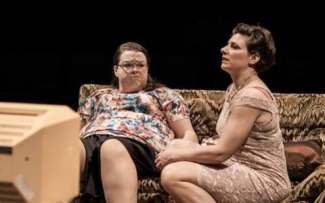 So now it’s over to the theatre in the round which started off the New, two incarnations earlier. The big news this summer at the Stephen Joseph Theatre is the arrival of the new artistic director, Paul Robinson, and with that, we can expect, a lot of new writing he’s been seeking out. But before then, it’s a revival of a very popular play with a strong association to his new home, The Rise and Fall of Little Voice. The play, incidentally, was never explicitly set in Scarborough – only a generic “town in northern England” – but ever since the film, it’s been very much seen as the home for the play. Laura, or Little Voice, or LV, rarely leaves her room, let alone her house, intimidated by her self-obsessed alcoholic mother Mari. One day, she brings home her latest lover-boy, Ray Say, a promoter whose silver tongue hides his black heart. When Ray hears the girl singing to herself in perfect match to all the female vocalists she plays on her late father’s records, he realises they could be sitting on a gold mine. But will anyone ever ask what Laura wants?

One challenge with any revival of this play is how strongly it’s associated with Jane Horrocks. With her playing the part of LV in both the original West End production and film six years later, all subsequent LVs have a dilemma: do you or don’t you try to be Jane Horrocks? This play went for the latter option. Serena Manteghi doesn’t try to imitate her famous predecessor, so you need to cast aside any expectations on how much she does it like the film and instead think about what’s needed for the story. Because when you look at it that way, it works very well. The crippling shyness that keeps Laura in her shell is evident every moment Mari talks to her, sometimes trying to be a mother but too often casually belittling her. When she sings, as well as imitating the songs perfectly, you can tell from the look on her face how much she is using this to block out the world around her.

There’s a few other difference between the play and the film. In the film, neither Mari or Ray have any redeeming features. In the play, they don’t have nice sides as such, but the power dynamics are more prominent. Almost. The more the story develops, the clearer it because Ray is only using her, and the clearer it becomes Mari knows this but denies it to herself. When Ray finally reveals his true colour and tells Mari what he really thinks of her, you almost feel sorry for her. Almost. But the biggest change is Sadie. In the film, she’s a cameo as Mari’s overweight sidekick. In the play, she has a much bigger role at the bottom of the pecking order: a women with no self-esteem whose weight is used by Mari to belittle her – the only, it seems, who Mari can feel superior to. But the nicest touch – something I suspect Paul Robinson went out of his way to include – is how much Sadie wants to be a mother to Laura, and probably could if it wasn’t for her real mother. 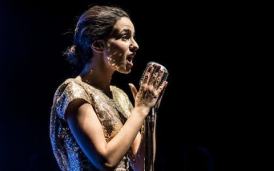 There is just one artistic decision that I think was a mistake, and that was to do the play in the round. The look on Laura’s face as she hides in her room is very important, but with her room being built up the seats on one side this would have been missed by anyone sitting in the wrong place. And I estimate that at least a fifth of the audience missed out on seeing LV actually perform her set, with her stuck in one of the aisles to the stage.  Okay, you can only use what you’ve got, it probably wasn’t an option to perform this is the lower-capacity McCarthy auditorium upstairs, but I would have have gone for the option of temporarily converting the main theatre into a three-quarters round like Chris Monks did for Geordie Sinatra and Soul Man. At it was, it was a shame that some of the best bits of the play went unseen to anyone sat in the wrong seat.

Apart from that, it’s a good start from Paul Robinson, and provided you weren’t setting your expectations against how much it’s like the film, it should have left few disappointed. So that’s job 1 done. Revivals are relatively easy. Now comes the hard bit, the new play. Will Goth Weekend go down well. We will find out shortly.