REVIEWS: Skip to BlackCatfishMusketeer, No Miracles Here, Mimi’s Suitcase, The Big Bite-Size Breakfast Show, Izzy’s Manifestoes, Replay, Cockroached, The Friday Night Effect, Richard Carpenter is Close to You, The City, One-man Apocalypse Now, Goblin Market, Boris and Sergey’s One-Man Extravaganza, You, Me and Everything Else, Love+,Victim, La Vie Dans Une Marionette, The House, Police Cops in Space, The Wedding Reception, Just Don’t Do It, Penthouse, List for the End of the World, Was It Good For You?, Give Me Your Love

At last. I am hoping the actually get 2017’s festivals rounded up in the year they actually take place, so let’s get to this. Reviews of everything I saw at Edinburgh Fringe 2017, and a few other things that were going on at the time. Most of this is covered previously in my Live Coverage, and in some cases goes into more detail, but here everything is arranged in a more logical order.

Sometimes I start off with an opening section covering any major stories that happened during the fringe. I’m not doing that this time because this year the fringe as a whole broadly went as planning with no major surprises. Arguably the most important news wasn’t what happened, but what didn’t happen. Last year, the Edinburgh Fringe had a small shrinkage which was was no big deal on its own, but could have threatened Edinburgh Fringe’s status as #1 festival if it continued. But this year, it’s back to growth, with registrations up 3.9% and – crucially – ticket sales up 9%, making this sustainable. The Festival Fringe Society might have got a fright last year, but now it looks like a false alarm. END_OF_DOCUMENT_TOKEN_TO_BE_REPLACED

So, starting with Alphabetti Theatre, this play took the highly prestigious slot of the opening piece for the brand-new venue. With this standing to set expectations for a lot of Alphabetti first-timers, a lot of responsibility was entrusted to co-producers Coracle Arts. But it was a good bet to take, because Arabella Arnott’s play had a very promising opening at the Gala’s scratch night, due in part to Rosie Stancliffe in the lead role of Beth. She has shone in every role I’ve seen her in, and even if the play itself doesn’t work out, she’s always added to it. END_OF_DOCUMENT_TOKEN_TO_BE_REPLACED

And here we are again. Another two years, another Lumiere. Only this time, I need to start calling this Lumiere Durham to distinguish it from the other Lumieres. Yes, in 2016, there was the launch of Lumiere London which was a great success. In fact, the only problem was that the festival was, if anything, too popular, with crowds sometimes too big to handle. There were doubts that Lumiere London could return, but it is, January.

However, at the risk of showing bias, Lumiere Durham remains the original and best. A light festival in a big city is all very well, but nothing beats a festival where the whole city is part of the festival. So without further ado, let’s have a look at what to expect. END_OF_DOCUMENT_TOKEN_TO_BE_REPLACED 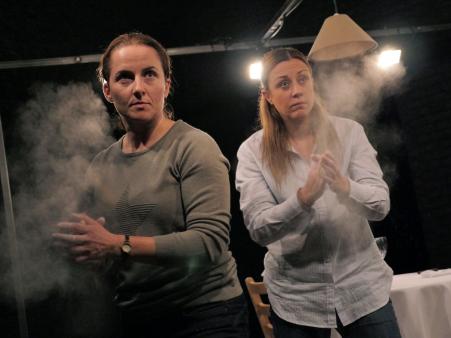 Taking on the subject of domestic coercion, Rattlesnake says something new from an unexpected direction.

It’s been ages since I last saw them, but it’s about time I acknowledged the success of Open Clasp Theatre Company, one of the leading theatre companies writing stories by women about women. That scores no bonus points here though – my sole interest is whether their stories are any good, where there’s good reasons to think so. I never managed to catch the smash hit Key Change, but I did see The Space Between Us four years ago, and whilst some bits of the story didn’t make sense, the thing that really impressed me was the characterisation: four outsiders (three immigrants and one traveller) depicted incredibly convincingly based on painstaking work interviewing real women. Now, in a co-production with Live Theatre, they take on the subject of domestic abuse, but not domestic violence, as is portrayed so often, but coercive control.

The distinction between violence and control is important. It is only recently that society has started wising up to the psychological element of domestic abuse. It’s easy to say “Why don’t you just leave your partner?”, and yes, for anyone in a sound state of mind that’s an easy thing to say, but that’s precisely the tactic of the abusers: to use fear, humiliation or any other tactics to make the victim see staying as the less bad option. Even if staying means putting up with more violence. But here, there’s no violence, just the mind games, and that can also be devastating. The law started to catch up in 2015 when coercive control was made a crime. END_OF_DOCUMENT_TOKEN_TO_BE_REPLACED

It’s that time of the month again. A roundup of things that happened last month that are worth a mention. A shorter list this time because fewer things than usual came up on my radar. If you’re looking for all things Harvey Weinstein, you can find my thoughts here, where I started off looking at this calmly but got angrier as more hypocrisy came to light. But apart from that, here’s what else has been going on.

Rotunda is returning to Buxton

Buxton Fringe registrations aren’t opening for another month, but already we have news from the High Peak. Grist to the Mill Theatre have confirmed they will be returning to the fringe in 2018, and booking have opened already. This news isn’t a big surprise – the mood had always been that the Rotunda had done well enough to to  make Buxton a regular occurrence – but it’s been confirmed sooner than we expected. END_OF_DOCUMENT_TOKEN_TO_BE_REPLACED