So, starting with Alphabetti Theatre, this play took the highly prestigious slot of the opening piece for the brand-new venue. With this standing to set expectations for a lot of Alphabetti first-timers, a lot of responsibility was entrusted to co-producers Coracle Arts. But it was a good bet to take, because Arabella Arnott’s play had a very promising opening at the Gala’s scratch night, due in part to Rosie Stancliffe in the lead role of Beth. She has shone in every role I’ve seen her in, and even if the play itself doesn’t work out, she’s always added to it.

Beth is happily married to John, and yet lately there’s a strain in their marriage. It’s not clear why, only a reference to something in the past. Something they don’t talk about. Something that’s supposed to be behind them. In a park, she runs into young mother Izzie, pregnant by mistake, boyfriend not wanting to know, mother unwilling to help. They hit it off well, and Beth’s interest, we soon discover, is that she was once in the same situation as her. Then Beth meets Jack. They also hit it off straight away. The maths says that he’s the right age for her long-lost son. He even shares the same name.

Overdue is a strong all-rounder, with a lot of work going into the characters. Particularly strong is the contrast of the two women. The two were faced with the same choices and make different decision, and now both wonder what would have happened if they’d gone the other way. One challenge faced in the brand-new space was staging the play on three sides with the dreaded sofa and park bench, both items that don’t play nice with anything other than end-stage, but director Mat Jamie handled it well, and sightlines worked well even for the third of the audience facing the back of the sofa.

I would have made the play 20 minutes shorter myself. At 80 minutes, it’s a little on the slow side. Normally, this wouldn’t be an issue and the story could proceed at a gentle pace, but here the plot is heavily dependent on a single twist. I won’t give the spoiler, but it’s a cleverly-executed twist, throwing the audience off-scent at the beginning. However, when the story moves this slowly, it’s easy to spend too much time thinking about the upcoming plot twist – and once you twig what’s really going on, there’s not much else to think about. Upping the pace a little, I feel, would benefit the play by keeping the audience distracted enough to not see the twist coming too early.

Still, for the high stakes set by an inaugural performance at a new venue, Overdue does the job it needed to do. It maybe won’t stick in my mind as much as Alphabetti’s last venue-opener, The Frights, which covered a lot of issues and made you look at them in a way you wouldn’t normally, but it’s still a play with wide appeal, and judging by the turnout this paid off. This play, I understand, is still under development, so with a bit of work on the pace, this could have a lot of life yet.

A Song for Ella Grey 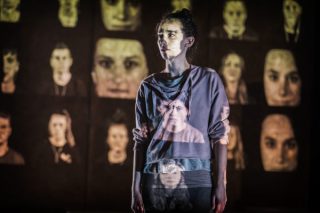 And now over to Northern Stage. When I first heard that Northern Stage were bringing a David Almond play to Newcastle, I thought this would be a safe bet given Live Theatre’s success with The Savage last year, the only downside being copycat programming. In actual fact, this is the other way round. I’d previously wondered why a David Almond play was being done in Stage 2 instead of Stage 1, but the reason, I found out, is that this is a far more adventurous and experimental play than Live’s offering last year, and that’s just the script. The production under Lorne Campbell’s direction is more adventurous still, with dozens of members of Northern Stage’s Youth Theatre providing voices and video footage for this re-telling of Orpeheus and the Underworld.

I’d expected A Song for Ella Grey to be similar to The Savage, and in some respects they are, with David Almond mixing the hopes and fears of contemporary teenagers with fantasy worlds. However, the way he does it is very different. In The Savage, a dispossessed boy’s unhappy life is mixed with the fantasy world he creates in his head throughout the play. Here, however, the real world and the fantasy world have a much sharper divide. Beginning with Claire (narrator and solo performer Amy Cameron) and Ella as 17 year-old best friends, they have ordinary lives growing up until the night of a hedonistic party on Bamburgh beach. Whilst Claire is happy to settle for a fling in a shallow relationship with Sam, Ella, kept at home, falls instantly in love with mysterious stranger Orpheus, who sing to her down the phone. Orpheus loves her back. A wedding ceremony is arranged on the same beach. But then Claire dies, and distraught Orpheus will do anything to get her back.

However, the abrupt transition from reality to fantasy didn’t seem to ring true. One moment it’s contemporary Tyneside, but the minute Orpheus steps through a sewer portal in Ouseburn, suddenly he’s in the underworld, just like the one in the ancient Greek myth, featuring three-headed dogs, magic harps and everything – that felt a bit weird. And some plot points lifted from the Greek legend didn’t make sense in the new setting. Eurydice dying from a deadly poison snake in mythical Greece I can buy – a healthy teenager dropping dead from an adder bite on a Northumberland sand dune, not so much. This in an adaptation from a graphic novel, so perhaps something was lost in the adaptation, but this time round the mix of fantasy and reality didn’t seem to gel.

As such, I wonder whether this script was the best choice for a concept piece where Lorne Campbell had plenty of his own ideas about how to stage it. There’s no denying the staging was ambitious – and huge respect for having the courage to do almost the entire underworld sequence in pitch black – but when you’ve already got a story that’s hard work to follow, this only makes it harder. The best effects, however, were stunning. In particular, the moment when Orpheus emerges into the light with the shadow of Ella behind her was an inspired piece of staging.

The audience turnout of the performance I went to wasn’t great, even by the lower expectations for a Stage 2 production. I was sorry to see this, because, for all its faults, A Song for Ella Grey deserved a better audience than the first five rows. But it’s right that theatres such as Northern Stage take risks. Having previously criticised Northern Stage for the unnecessary gamble of putting Dr. Frankenstein in Stage 1, this time it’s fair to say Northern Stage did the right thing for a risk-taking production. So I hope this play is not judged on ticket sales, because it was one a the boldest plays I’ve seen in the north-east, taking on a lot of new ideas. Some of the ideas might not have worked out, but a lot of other ideas worked well. These ideas – especially the collaboration with the Youth Theatre – can go on to inspire future projects. For that reason, I’m glad Northern Stage did this.