And it’s that time of year. Time to pick some winners for the whole of 2017. And, boy, there’s been some tough choices this time round. Some of these categories I’ve been certain of a winner for months, but for others I’ve been changing my mind repeatedly up to the very last moment. But I have made my decisions, so now it’s time to announce them.

As always, a reminder of the ground rules. Anything I saw for the first time this year is eligible, whether I wrote a review or not. This includes plays previously excluded from review coverage owing to conflicts of interest (that’s a teaser). The only notable exclusion is that plays I have seen in previous years from the same company are not eligible a second time round – this is so that the awards are not dominated by long-running successful shows. So this puts I Am Beast out of the running, something that was a previous runner-up for best production and would have been well-placed for several awards this time round.

So, who’s won? The list is drawn up, envelopes are checked, and any mix-ups involving La La Land are safeguarded against. Here we go.

This was a tricky one, but not the the usual reason. This time, it came down to a question of whether the winning entry can be considered new writing. This means this year’s runner-up can be considered the winner if you disagree with my ruling. So in second place for best new writing (or first if you argue that the winner doesn’t count) is BlackCatfishMusketeer. There were a lot of good scripts this year, but the thing that stood out with this one was the fact that the entire play was written in instant messages on a dating app. As any writer knows, things that read well on the page (or screen) rarely sound so good when spoken, but Dylan Coburn Grey managed to do both. With a clever unexpected twist on the issue of trust,  Malaprop Theatre comes out of nowhere to come so close to scooping one of the best awards. 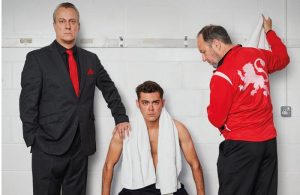 So what went to a stewards enquiry but has gone on to win? It’s Patrick Marber with The Red Lion. Live Theatre’s production this year was not a premiere – that was at the Dorfman Theatre (the smallest of the three spaces in the National Theatre) in 2015. In the end, I made a decision based on what this award recognises: a successful production on the strength of a conventionally-written script, as opposed to a production that does a good production of an earlier well-known play, or a play whose script was a joint effort of the cast – both of those have their own awards. And there’s a lot to be said about Patrick Marber’s script here: a four-way power-struggle in the world of non-league football, where alliances and ambitions rise and wane on the dealings of three men in the dressing room of the club they all call home. It’s a world he knows intimately, a world he’s creating convincingly on stage, and the characterisation of the three men – all with their own hopes, strength, fear and weaknesses – is superb. It may be second time lucky for this play to gain a successful West End run, and it’s a wonder that the National didn’t make more of this the first time round, but, hey, the National’s loss is Live Theatre’s gain. END_OF_DOCUMENT_TOKEN_TO_BE_REPLACED

UPDATE 18/12/07: I’m putting an update at the top of an article because I confess I missed one important detail. It doesn’t make anything I said below wrong as such, but it does change the emphasis quite a bit, and arguably answers the questions, at least the important ones. My partial excuse for missing this is that when I’m dealing with unreliable sensationalist publications, I skim though the opening paragraphs until I reach the quotes to find out exactly who said what. On this occasion, by doing that, I missed an important detail in the heading. I said that there was an claim (unverified) that cast weren’t being paid. However, the opener to the article is more specific. That says Denise Welch herself wasn’t paid.

An important difference here is that this claim is not quoted as an anonymous source: The Sun has stated it as fact. In this turns out to be a lie, it’s unlikely The Sun can weasel out by saying they were only reporting what an unnamed source said. My reading of the article is that it’s reporting as fact that Welch wasn’t paid, and an anonymous source alleges (unverified) that other people weren’t paid too. However, there is a possibility that when they say “cast were paid late or not at all”, by “cast” they mean Denise Welch only. It would be incredibly dishonest if they were misleading readers by passing off a personal pay dispute between Welch and Pantodrome as something wider, beyond the pale by any journalistic standards. There again, this is The Sun, so who knows?

However, this does give Times Square Panto a legit reason to avoid addressing allegations over pay. As it now looks that a pay dispute would be a major factor in any upcoming legal scuffles, you probably don’t want to undermine your own case by talking about the alleged disputes with the rest of the cast. It doesn’t get them off the hook on the issue of payment itself, but it does at least explain why this has been left off the public statements so far.

I’m done asking questions, I’m not going to ask any more. My advice for Times Square Panto would be as follows: in order, settle up any pay grievances with the rest of the cast ASAP, then resolve matters with Denise Welch, then come clean over what went wrong. Doesn’t have to be a comprehensive list of faults, but it’s in their interests to convince us that lessons are learnt and it won’t happen again. Because whatever the truth is about the pay allegations, it’s going to come out anyway – if not in the press or in court, it surely will on the actors’ grapevine. It won’t pay to ignore this indefinitely.

UPDATE #2 (30/12/07): Oh dear. Not looking good. According to the Evening Chronicle, the last two performances were cancelled due to a walkout over pay. And there was me starting to think I’d been too harsh on Times Square Panto.

Original article follows; please read it in context of this above …

COMMENT: We don’t know who is at fault for the fiasco surrounding Denise Welch’s departure from Times Square Panto. But staying silent over the allegations is not an acceptable response.

Panto is the last thing I’d expect to cover here. In general, I avoid them like the plague, because – with a few honorable exceptions – I find most of them to be predictable and formulaic. If anything, my favourite memories of panto are the ones I used to watch in Saltburn. They were sometimes great, sometimes abominable, but they were always different. Certainly not like the big-budget professional ones where, I have to say, once you’ve seen one, you’ve seen them all.

Another thing that’s a big turn-off for me is celebrity names. I look at all these big names on posters and usually go “Who? … Who? …  Who?” Theatre outside of London is largely spared the marking based on who’s been in which soap and who’s appearing in I’m a Celebrity Strictly Come Dancing on Ice Factor, but I don’t see why a show is going to be any better just because the principals are famous for things other than theatre. At least when the leads are played by unknowns you’re giving someone a chance for their big break instead someone who’s already got theirs.

However, I accept that panto-haters like me are the minority, and I accept that pantomimes make a lot of money so that theatres can afford to run the rest of the year. And if casting soap stars and reality stars means they make even more money, so be it. As such, it’s not really my business to comment on how pantomimes should be run, and if what happened at Times Square Panto was just another celebrity strop, I would take no notice.

But this goes deeper than whether Denise Welch plays Mother Nature in Jack and the Beanstalk. This is a potentially a matter of employment rights of actors. So I’m going to stick in my oar whether I’m welcome or not. I want some answers, and at the moment we’re not getting any. END_OF_DOCUMENT_TOKEN_TO_BE_REPLACED

REVIEWS: Skip to: How to Win Against History, Drag me to Love

I have found a number of contrived themes as an excuse to review two plays together. Sometimes it’s two in the same town, sometimes they run at the same time, and sometimes it’s on the same theme. A common theme I was not expecting to use, however, is cross-dressing. But, by co-incidence, the only two plays on this subject come in the same month, so, what the hell, let’s have a cross-dressing themed post. (And the title of this post sounds slightly like a certain infamous couple, although neither of them have embarked on a trail of robbery and murder across the USA unless somebody knows something I don’t.)

How to Win Against History

I don’t know if Northern Stage fully realises what they’d got, but it was a massive coup for them to have Seiriol Davies coming to them. How To Win Against History is the very rare Edinburgh Fringe play that people rave about everywhere you go. This easily sold out on a two-night run in Stage 3, the only puzzle being why Northern Stage programmed such a massively successful show in its smallest space. With a bigger push with publicity I reckon this could easily have filled Stage 2. If you were someone who decided to take a punt on a play about the 5th Marquis of Anglesey, who lived his life the way he wanted, then congratulations – you saw the top reviewed Edinburgh Fringe show of 2016, scooping no less than six five-star reviews. END_OF_DOCUMENT_TOKEN_TO_BE_REPLACED

Oh boy, I’ve been spending most of November getting angry over things. One thing that particularly angered me was this business over a student rugby team putting on an event insensitive to locals. I’m not angry with them – their only crime was to do something stupid without thinking, something we were all guilty of at their age – but at the public shaming campaign that was organised in response to this. I won’t be responding to this here – it needs a full article to explain exactly why you should be worried about this kind of stunt. That will come later.

I’ve also been getting getting increasingly angry with the fallout to the Weinstein saga. After the initial (quite justified) furore over Weinstein himself, the hypocrisy has been getting progressively worse. I’ve heard complaints that people are having careers destroyed over hearsay; I don’t know about that, after Kevin Spacey I lost track of who was being accused of what with what evidence. But what is alarming is that some people who are proven guilty of serious sex offences are getting off with a slap on the wrist, depending on where public outrage is being directed this week. If I ignore all the allegations unrelated to performing arts (and with it some shocking levels of victim-shaming going on across the political spectrum), the two most glaring cases are currently Poman Polanski and James Barbour. This article is a good summary of what kind of child-rape it’s apparently okay to commit if you star in Phantom of the Opera (Barbour has since said he’s leaving the run, but he’s moving on to other shows like nothing’s happened). I’ve already gone on enough about Polanski, so this poem from 2009 sums up the absence of morals quite eloquently. END_OF_DOCUMENT_TOKEN_TO_BE_REPLACED