Okay, here we go again. Hope you all made the most of your month off theatre (two if you’re allergic to pantomimes). But February is coming, and with this another season of recommendations. As always, the rules for how I choose recommendations are here. Just a reminder that I rarely recommend a play solely because it’s being produced by a high-profile company – normally it will be on the strength of a writer, director, or performing company I’ve seen before. But that way, this means the little fish stand a fair chance against the big fish.

One notable omission is it stands it Live Theatre. For some reason, they still haven’t announced all of their next season. As soon as I hear what they’re doing, I will insert anything worth including. END_OF_DOCUMENT_TOKEN_TO_BE_REPLACED

UPDATE: Most of you looking for this article will know this already: but there is one small but important clarification to make. This story, along with everything else written at the time, said Denise Welch quit the show. We now know this is disputed: Denise Welch has since said she was sacked after threatening to speak out. Doesn’t change what I wrote, but something to bear in mind. Will update on all the shennagins soon.

Sorry to burden you with another Pantogate article. I wrote one, and thought that would be enough. But that was before the shit really hit the fan. Oh boy. Just when everyone thought things had settled down at Times Square Panto after the celebrity walkout, it came to a head on the last day with another walkout, only this time, it was enough to get the last two performances cancelled. It would be extremely tempting at this stage for me to say “I told you this would happen,” but that wouldn’t be truthful. In all honesty, I never for a moment imagined things would get this bad.

I have a rule on this blog (indeed with life in general) that I don’t kick public figures when they’re down. For reason I’ll come on to in a moment, I think the game is up for Times Square Panto, so there’s little point dogpiling any further. All it’s fair to do now is sum up what happened and ask what lessons can be learned. However, some questions need asking over how this was allowed to get to this point. Had there been some more vigilance, I have doubts it would ever have had to come to this.

END_OF_DOCUMENT_TOKEN_TO_BE_REPLACED

Skip to: Di, Viv and Rose

Paul Robinson’s new writing debut for the Stephen Joseph Theatre is an interesting insight into to misunderstood world of subcultures. That is where Goth Weekend was at its strongest.

Ever since Chris Monks unexpectedly announced his departure from a theatre in Scarborough with a very famous predecessor, one of the big questions was where the Stephen Joseph Theatre would go next. Paul Robinson’s appointment was announced in early 2016, with a strong indication that the theatre wanted to go in the direction of new writing, but such is the long timescale of planning theatre programmes that it wasn’t until late 2017 that we had our first real indication of what kind of new writing we can expect. Goth Weekend isn’t Paul Robinson’s first play directed at the SJT, but it is the first next play, so all eyes were on this.

There were two things notable about this choice of play. Firstly, it’s a co-production between the SJT and Live Theatre. This might seem a tall order, with these two theatres’ audiences having very different tastes, but the crossover has worked before, and brings a unique touch to both theatres. Secondly, it shares in common with And Then Come the Nightjars, Paul Robinson’s last touring production in his previous job at Theatre 503, a setting of a world described in detail. Then it Bea Robert’s story of a farm during and after the foot and mouth outbreak – now it’s Ali Taylor’s play the world of Goth subculture. END_OF_DOCUMENT_TOKEN_TO_BE_REPLACED

Tuh. Lumiere festivals are like buses. You wait ages for one to come along, then you get two at once. However, for non-obsessives who live in Durham or London, you get one festival every two years. Durham has just had its festival, now it’s London’s turn.

Lumiere London is possibly the greatest coup that County Durham culture has pulled off. Durham’s festival was already one of the most popular and most prestigious festivals over the whole of the north-east, now it has been exported to London and proved a hit there too. In fact, if there was anything at all to fault of Lumiere London, it’s that it was too popular, with more people coming to see it than anyone had expected.

So, as usual, here’s my preview based on what I’ve previously seen in Durham. I cannot give the lowdown on every single installation coming to London’s way – most of them are things that are completely new to Lumiere – but a lot of them have been to Lumiere Durham before. This is where I can lend my expertise. END_OF_DOCUMENT_TOKEN_TO_BE_REPLACED

Newcastle might still be dominating the north-east’s cultural scene, but the prize for the biggest single cultural export surely belongs to Durham. Originally intended as a one-off in 2009, threatened by funding cuts in 2015, the Lumiere Festival is now not only a cultural institution in the north-east but has also been taken successfully to other cities, most notably London, who are bringing it back for the second time later this month. I’ll be giving my recommendations for London shortly – before that, however, let’s take a look at what Durham had to offer.

As usual, I’m not doing to do a comprehensive roundup of everything, simply pick out some highlights of what I think we should do more of in the future, and also some suggestions of what I’d like done better.

One interesting thing I did was compare what happened this year to what I wrote about in 2015. This year, there was one big change imposed on the festival which is that a lot of Durham is a building site at the moment. Two major sites north and south of the Milburngate Bridge were (and still are) in various states of demolition and rebuilding, and most notably, the Cathedral itself, normally the centrepiece of the festival, has its own building work going on that made the normal installation impossible (more on this is a moment). There was, therefore, a few reasons to believe this would be a different Lumiere to previous festivals. END_OF_DOCUMENT_TOKEN_TO_BE_REPLACED

There’s one final thing to wind up from the year just gone – well, apart from all the reviews I still have to write – which is the annual roundup of what you read on this blog. Without further ado, let’s down to business.

Not counting regular articles such as the fringe coverage (which always gets loads of view for obvious reasons), here’s what got the most interest by category. 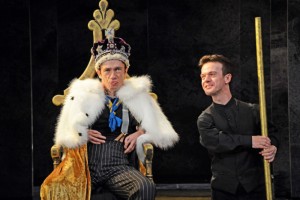 Most read comment piece: The most read comment piece was one I almost didn’t write. Even though I didn’t see Northern Broadsides’ Richard III, I wrote it because the use of a disabled actors in the titular role, I thought, was a very good idea. But I still shied away from writing this because, on the subject of providing opportunities to groups who are at a disadvantaged, I’m hesitant to tell other people what’s good for them. But I went ahead, being careful what I said, and it seems Northern Broadsides agreed because they publicised this and it got an unprecedented number of views. END_OF_DOCUMENT_TOKEN_TO_BE_REPLACED