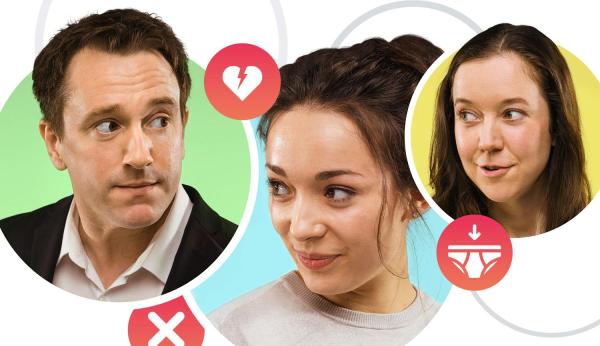 As a rom com, it’s tough for D. C. Jackson’s My Romantic History to stand out from all other rom coms, but its biggest strength is way a the small cast weaves together all the storylines.

So, Live Theatre embraces the rom com. This is frequently maligned in the arts world for pandering the audience figures, but that’s a little unfair – why should a new writing theatre shy away from a format just because it’s popular? There is, however, a challenge with this format: rom coms, along with zombie flicks, are the two most over-used tropes in performing arts. Every kind of rom com has been done before. And every kind of zombie flick. And every kind of rom com with zombies (yes, really). That’s fine if you’re prepared to settle for a crowd-pleaser where the audience works out the entire plot ten minutes into Act One, but if you want to bring a fresh original take to this format, it’s very difficult to find one that hasn’t already been used several times already. It’s happened, and I’ve been pleasantly surprised (both rom com and zombies),  but those exceptions far and few between. In short, the rom com isn’t the walk in the park you might think – certainly not to an audience who expects cutting edge writing.

Stepping up to the challenge is D. C. Jackson best know for Fresh Meat, and if you’re hoping for something as excruciating as that TV series, you won’t be disappointed. Switching students at university to thirtysomethings in the workplace, we follow the story of Tom and Amy, work colleagues who start a relationship after hooking up after Friday Night drinks. Although “relationship” is a debatable term – a less generous description would be a one-night stand which neither of them get round to calling off. And, as Tom observes, the problem with workplace flings is that the age-old excuse of telling your flingee you’re so busy in your job doesn’t work any more. The root problem, as suggested by the title, is that both Amy and Tom are both comparing each other to the long-lost loves of their lives. Although it doesn’t help that they’re viewing their teenage memories through rose-tinted glasses. In fact, unreliable memories is a key theme of this play. END_OF_DOCUMENT_TOKEN_TO_BE_REPLACED 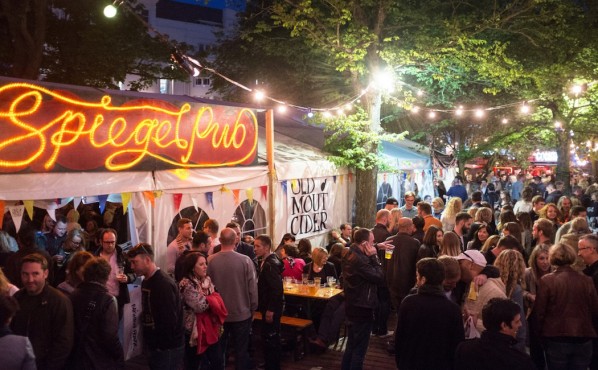 And here we go. Time to start festival fringe coverage for 2018. Anyone who was itching for something like the Edinburgh Fringe had the Vault Festival to tide them over, but that is curated by the organisers. This time (and again in July and August), no such power exists. Anyone can be part of this festival, and whilst you can get various leg-ups from venues, the media or the Fringe Committee itself, the ultimate power lies with the audience. They decide who the biggest successes shall be.

The last two Brighton Fringes oversaw unprecedented expansion and a lot of changes that came with it. This year, however, there’s few changes. Sweet Venues has ditched Sweet Waterfront and instead taken Sweet Werks, the Old Courtroom has reappeared as a fringe venue, but other than that it’s really a consolidation of the growth in 2015-2016.

But you already knew that, didn’t you? You want me to get on with my list of picks? As you wish. Let us begin. END_OF_DOCUMENT_TOKEN_TO_BE_REPLACED 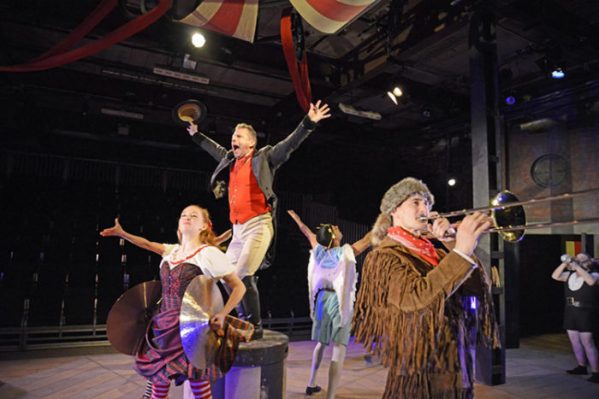 Hard Times is a much harder story to adapt than the other works taken on by Deborah McAndrew and Conrad Nelson, but they did the best job they could have made of it.

Who called it first? Ten years ago, Accidental Death of an Anarchist was a side-show against Northern Broadsides’ main attraction of Shakespeare and other classic stories, starring or directed by Barrie Rutter, or both. And yet the husband-and-wife team of Conrad Nelson and Deborah McAndrew has grown to become an attraction in their own right, with hits from A Government Inspector and The Grand Gesture, plus a collaboration with Barrie Rutter for An August Bank Holiday Lark,with not a weak link amongst them. Now with Conrad Nelson stepping in as interim artistic director, possibly a permanent arrangement, this pair are now set to dominate the programme. So it is no surprise that after a deservedly successful run of Cyrano de Bergerac that was co-produced with the New Vic, the people of Stoke and Newcastle-under-Lyme would be queuing up for their next show.

Their latest adaptation, however, is of a book rather than a play. And as choices of books go, Charles Dickens’s Hard Times is, somewhat befitting its name, hard. The only Dickens novel that is set in the north (albeit in fictitious Coketown), the story is, in some respects, a longer version of A Christmas Carol. The central arc of the story is the journey of Thomas Gradgrind, a self-made man who attributes his success to learning facts. That, he strongly believes, is what his two children must be taught – and anything that cannot be explained with facts, such as art and love, must be suppressed.* Like Ebenezer Scrooge, his dogmaticism, well-intentioned though it may have started, comes at a heavy price for those he loves, until finally he sees the error of his ways and changes for the better. In the book, the three parts are titles “sowing”, “reaping” and “garnering”, and that summarises the story rather well. END_OF_DOCUMENT_TOKEN_TO_BE_REPLACED

Holy shit, six years. Don’t I have anything better to do? But as WordPress has been keen to remind me, that’s how long I’ve been running this blog. Three years ago, I wrote What I’ve learned from three years of theatre blogging. It’s interesting for me to read my old articles, but looking at this now, there’s nothing where I’ve really changed my mind.

But now I’ve made it to six years (and I vigorously deny all those vicious rumours that I planned to do this for five years but I never got round to it), it’s a good time to add some new things. Some of them things I was close to learning anyway – on or two, however, are eye-openers, and not in a good way.

When I started doing this on a whim back in 2012, the last thing I imagined is that this would actually matter. Most plays, I just assumed, got plenty of “proper” reviews, and mine would be added to the pile. The most difference I thought this would make is that it would provide some constructive feedback that performers would be free to heed or ignore as they pleased.

What I hadn’t realised was how rare a commodity a review is. Outside of productions programmed by major theatres, it’s difficult to get any kind of coverage. Your review in a self-published blog may be the only one. It could be the only source of constructive feedback a group gets. You could be the only evidence a group has when making an arts council grant. It could spell the difference with whether or not other review publications give them a chance in the future. END_OF_DOCUMENT_TOKEN_TO_BE_REPLACED

One thing I’ve made a conscious decision on this month to stop covering for the time being is the ongoing row of Times Square Panto. There is now little argument over who was in the right and who was in the wrong, and now it’s descending into legal wrangles over whether anyone should be held personally liable. I don’t kick artists when they’re down, and that includes speculating over legal liability. When this is all over, one way or the other, I may come back to this, but that’s all for now.

Without that, I expected this to be a short article, with not much of interest (apart from one thing I need to write a full article on), but when I checked back, more things got added to the list. So it’s an eventful month after all.

Stuff that happened in March:

All change at Durham

Starting on home turf this time, there are two big announcements from Durham venues. I have links with both these venues and frequently hear stuff in advance of official announcements, but before anyone tries reading between the lines here, I must make it clear that: 1) everything I’m telling you has already been stated on the record, and 2) at this moment, there is nothing I’ve heard off the record that I’m not telling you. END_OF_DOCUMENT_TOKEN_TO_BE_REPLACED