This page will be added to over the course of the Edinburgh Fringe. Keep returning here for more updates, at least once per day.

REVIEWS: Skip to: Eight, Narcissist in the Mirror, Sexy Sweaty Party Party, House of Edgar, My Brother’s Drug, Por Favor, Maz and Bricks, All Out of Time, Hunch, Bite–Size, Kin, Year Without Summer, Build a Rocket, Notflix, Match, The Fetch Wilson, You’re a Good Man Charlie Brown, This Is Just Who I Am, Proxy, Neverwant, Vivian’s Music, 1969

Sunday 2nd September: And that bring us to the end of the Edinburgh Fringe live coverage. It’s not quite the end of all things Edinburgh, because there’s still the fallout of a few events at the end of the fringe to be reckoned with, such as the allegations over behaviour of venues and the stats for growth, but this will rumble on way beyond August.

Thank you to everyone who stuck with this through the month. In the end all the reviews will go into a roundup, but before then I have a backlog to clear going back to July. Thanks to everyone who invited me to review their shows, and to everyone who made the effort to make this fringe what it is. If I couldn’t see you, my apologies, there’s only a limit to what I can see. If you’re determined to see me, ask again, because I value polite persistence.

I will now join you in a month-long hibernation. Thank you and goodnight.

Saturday 1st September: And this is it. I have made my decision on what to put in Pick of the Fringe. For those of you who have been following this regularly, a reminder that I am a lot more choosy at Edinburgh than I am at Brighton or Buxton. Previously, shows that made it to pick of the fringe at one of these festivals have only made it to honourable mention. If you are not on the list, that does not mean I hated your show – merely that it’s a fiercely contested list and not everyone can be a winner.

As before, shows marked in (brackets) are shows I saw in the past year prior to Edinburgh. In general, I don’t have time to see plays I’ve seen earlier in the year, but in order to give them a fair chance they are eligible to be in the list if they performed at Edinburgh. Only shows I particularly liked get this treatment – if I was less enthusiastic, it’s only fair to wipe the slate clean, and start again.

Pick of the Fringe:

Full details will come in the roundup (whenever I get round to it). You can stop the drum roll now. END_OF_DOCUMENT_TOKEN_TO_BE_REPLACED

Skip to: Fleabag, Frankie and Johnny in the Clair de Lune

Whilst I have a post-Buxton Fringe breather (and because I want to avoid a repeat of last year’s embarrassing backlog), it’s time for another catchup now. Shortly after Brighton Fringe, both Live Theatre and Northern Stage hosted plays in their main spaces. I prioritise fringe theatre reviews over mainstream theatre reviews – the latter doesn’t really need my publicity – but with Brighton Fringe under, let’s catch up with these. 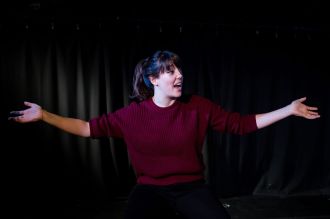 This needs no introduction. The BBC Three series was phenomenal, arguably the channel’s greatest success since its controversial move to its streaming-only service (and the strongest evidence to date that a web-only BBC Three is a viable service). But before the successful TV show written by and starring Pheobe Waller-Bridge, there were the solo fringe show she wrote herself that started it all off. With the titular role now played by Maddie Rice, it’s been, to no-one’s surprise, performing to sold out houses up and down the country. With me far too disorganised to catch up with anything on television, this was a good opportunity for me see what all the fuss in about.

We begin with Fleabag (a nickname, but Waller-Bridge never specified a real name) attending a job interview, where a PG-rated misunderstanding swiftly esclates into calling each other a slut and a pervert. Then we go back to the 18-rated story of how she got here. After she masturbates to Barack Obama’s speeches with her boyfriend beside her, he leaves her yet again. No worries, this happens all the time, and Fleabag uses this as her opportunity to work her way through as many blokes as she can. Her flat still has a handprint from the threesome she had whilst on her period – we don’t get any more details as to how that came about, but I’m happy not to know that. Suffice to say this sets the tone for most of her sex life references in the story. The rest of her life is about as chaotic as her sex life. She manages a cafe that she used to run with her beloved best friend Boo. But since Boo’s tragic accident/suicide, she muddles on with that the way she muddles on with everything. END_OF_DOCUMENT_TOKEN_TO_BE_REPLACED

Later than usual (again). I’m quickly have a reminder that the month after a play finishes isn’t peace and quiet – it’s the month where I have to catch up on everything that I’ve had to postpone from the previous two months. But before we dive into the thick of Edinburgh Fringe, there’s a chance to catch up on things that have been happening between Edinburgh and Brighton.

Stuff that happened in June

The rise of Greater Manchester Fringe

The next major thing on my calendar is, of course, Buxton Fringe, the UK’s third biggest fringe after Edinburgh and Brighton. As long as this blog’s been going, these have always been considered the big three. Now, however, we may need to start thinking about a fourth. Greater Manchester Fringe barely existed when I started writing, but this year there are about 120 registrations. That’s not far behind Buxton, currently around 180.

Greater Manchester Fringe is supported by a recently-vibrant year-round fringe theatre scene, similar to the Vault festival being supported by the year-round fringe theatre scene in London. But there is an important difference: the Vault is a curated festival (and it would be impractical to be anything else), but the Greater Manchester Fringe is a proper fringe where anyone who wants to take part can. They make it clear that if you can’t get programmed into a listed fringe venue, you can find your own venue and register than way. And one small but important symbolic gesture is that they actively encourage people to see shows by groups you’ve never heard of in venues you’ve never been to. It could not be more different from the Great Yorkshire Fringe, where anyone who is not programmed into their official venues is given the cold shoulder. END_OF_DOCUMENT_TOKEN_TO_BE_REPLACED

SKIP TO: The Unknown Soldier, Gated Community, Behind the Agony, A Curse of Saints, Extremism, Antigone Na H’Éireann, Sea Wall / The Shape of Things, Trapped, Earthling, I let a six-year-old write my show, Disgusting songs for revolting children

All right, Sam Slide, you can stop pestering me. I’ve allowed a bit of a backlog to build up again as a result of doing two plays at once, but I haven’t forgotten Buxton Fringe. As always, my list of what I recommend seeing. As the smallest of the three fringes I cover, this is a more comprehensive list than usual – at Brighton or Edinburgh, I’ve only heard of a fraction of the acts, but in Buxton I at least recognise the names of many of the groups, even if I haven’t seen them before. But even so, the usual disclaimer applies – this list should be seen as a cross-section of what’s worth seeing, not a complete list. As always, anyone who wants to see the full rules governing what goes in can come this way.

Last year’s Buxton Fringe was a very significant one for two reasons: Underground Venues relocated from the Old Hall to the Old Clubhouse, and the brand-new Rotunda set up in the Pavillion gardens. This year, however, there’s not much change in the headline figures. Fringe-wide numbers are about the same, numbers at Underground Venues and Rotunda are slightly up. However, it’s not quite a “no change” fringe and within these static numbers there’s a fair bit of difference. Last year, the Rotunda’s programme was dominated by shows produced, or at least backed, by Grist To The Mill themselves; but this time, it’s a far more diverse programme – a result, presumably, of the Rotunda advertising for applications much further in advance. Underground Venues, meanwhile, appear to have more entry-level acts this year – again, this might be down to the early addition of the Rotunda balancing up supply and demand on the managed venues. Whatever the reason, I am now less concerned over losing Buxton as a suitable starting fringe than I was last year. END_OF_DOCUMENT_TOKEN_TO_BE_REPLACED