COMMENT: It’s good to support political theatre. This should not turn into political vetting of theatre.

Last year, I went on record over the issue I have with most political theatre. Not the concept of political theatre – when done right, political theatre can be a huge vehicle for change – but my frustrations with how often it’s done badly. If your idea of political theatre is a play on a safe subject matter, where you know you can get a like-minded people to turn up and approve of what you say, it’s a relatively easy job. But if you are actually seeking to influence anyone – and entrenching views your audience already hold isn’t enough here – it’s a harder task. And most frustrating is that so many artists keep making the most basic mistakes: crap arguments, incomprehensibly abstract, or talking down to anyone you hope to get on your side.

However, you can ignore that here. For purposes of this article, I am talking about political theatre that gets the basics rights, with arguments that are not shit, incomprehensible, or condescending. I am now turning my attention to the next level up, and that’s the groups and theatres who support political theatre. The thing that got me thinking about this is Live Theatre’s new artistic director, Joe Douglas, seeking to bring in a lot more political theatre. Welcome though this is on the surface, it does raise some questions about vetting of work and artistic freedom. In the worst-case scenario, it could even be an issue of censorship.

Before I go any further, I want to make it clear this is not meant to be a grilling of anyone in particular, and definitely not a grilling of Joe Douglas. I’ve met him and I like him, both as a person and someone who’s made an effort to open up Live Theatre to everyone and not just rely on inheriting an existing in-crowd. I haven’t seen his Live directorial debut yet, but Clear White Light sold out by press night so he must be doing something right. And I will stress that the questions I’m raising are genuinely meant as questions – I honestly don’t know what the answer to this is. But these are difficult questions that require difficult answers from someone. END_OF_DOCUMENT_TOKEN_TO_BE_REPLACED

Okay, here we go. Let’s round up the big one. After a busy spring and summer with Brighton and Buxton Fringes, Edinburgh does become a bit of an endurance test, but I can think of few better ways of pushing your stamina to the limit. This year, I managed 27 shows over six days, with thoughts on most of them dotted over my live coverage with what I thought at the time. Now it’s time to get this into some sort of order.

REVIEWS: Skip to: Vivian’s Music 1969, Proxy, Build a Rocket, The Fetch Wilson, Bite-Size, Maz and Bricks, House of Edgar, Eight, Neverwant, Hunch, My Brother’s Drug, Por Favor, This is Just Who I Am, Year Without Summer, Kin, All Out of Time, The Narcissist in the Mirror, You’re a Good Man, Charlie Brown, Match, Notflix, Dark Room / Sexy Sweaty Party Party

Edinburgh Fringe as a whole was dominated with talk of “peak fringe”. The flatline in 2016 turned out to be a blip, and now the 2018 fringe is bigger than ever – and not everybody’s happy about that. Top of the list of complaints was the over-subscribed demand on venues and especially the accommodation rendering the fringe unaffordable for many, and indeed there was a event to discuss this very issue. A secondary issue was the way that fringe workers were treated, with some serious allegations made about the behaviour of some venues that – so far, apparently – the venues in question have not denied. (Index at all the these issues as and when they were raised in the article at the bottom of this article.)

At some point, I will write my thoughts on what I think should be done about employment rights at the Edinburgh Fringe. I’ve already said the reform I would make to bring down costs: stop obsessing over Edinburgh to the exclusion of all the other fringes. That is unlikely to be the solution favoured by the Festival Fringe Society – but they have to say something, having already backed the cause. At the moment, the ball is in their court. It will be very interesting when they finally say what they propose to do.

But enough of that. We’ve got a lot of reviews to get through, so let’s get started.

Pick of the Fringe:

As always, in recent Edinburgh Fringes – as I’ve got better at finding the good stuff – I’ve had to get pickier over what goes in this top tier. Things that might have made it into pick of the fringe in other festivals or previous years might not make it now. At some point, it looked like I might raise the bar even higher, after an exceptional start over my first 24 hours. But in the end, there were eight that I could pick out as a cut above the rest. END_OF_DOCUMENT_TOKEN_TO_BE_REPLACED

Before I embark on Edinburgh Fringe coverage, let’s round up another main season at the Stephen Joseph Theatre. Apart from a programme very heavily defined by its very famous former artistic director, the other unusual feature of the SJT is that whilst most theatre wind down for the summer as people turn their attention to holidays and/or the Edinburgh Fringe, in Scarborough the programme ramps up.

Skip to: The 39 Steps, Build a Rocket, Joking Apart, Better Off Dead

There is one change this year though – until last year, the SJT ignored the Edinburgh Fringe as it moved into peak summer season. This time, however, they have decided to do both, with a full-on summer season at Scarborough complemented with their own Edinburgh excursion. But I am going to go through the plays in (roughly) chronological order in which they were shows, so we begin with:

Fringe season over, so it’s time to get back to this. But if you expecting another episode of fearless journalism and explosive revelations in north-east theatre (N.B. fearless journalism and explosive revelations may be more mundane and uncontentious than advertised), you’ll have to wait, because it’s been a slow news month for a change. However, there have been a few tidbits on the fringe circuit that are worth looking at.

Stuff that happened in September 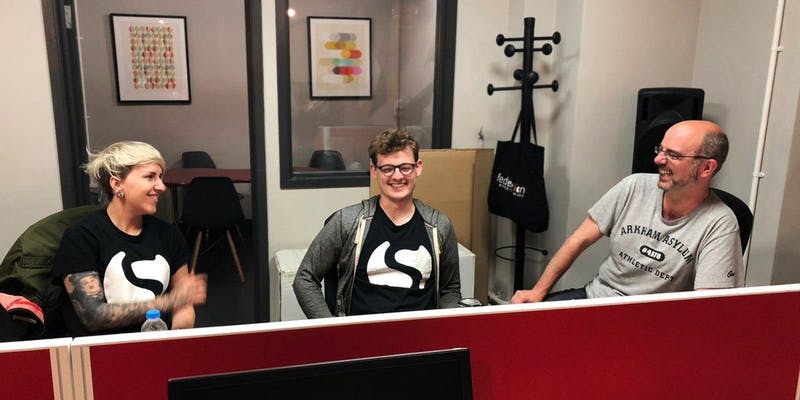 Starting in Brighton, we will shortly have Brighton Horrorfest underway, which is Sweet Brighton’s biggest event after the Brighton Fringe. I can’t make it to this because ten-hour round trips are bummers, but if you’re in easy reach of Brighton it’s worth checking this out because Horrorfest shows that succeed often go on to do well at the following Fringe. However, apart from that, one interesting development. Until now, this has been done at the Dukebox, at the time Sweet Venues’ only year-round venue. This year they’re at two venues: Sweet’s other year-round venue at the Wellie replaced Sweet Dukebox this year; but the other venue being used is Sweet Werks. END_OF_DOCUMENT_TOKEN_TO_BE_REPLACED