It’s finally happened. Many times I’ve thought not a lot happened but ended up with loads to report, but this time, I’ve scoured far and wide for interesting news and discovered it really is a slow month news for once. So let’s get this over and done with:

Stuff that happened in October:

Not much, but amongst the not much going on is:

So starting in Brighton this time, the bit of news that caught my eye is Junkyard Dogs. If you come to Brighton Fringe for the theatre, Junkyard Dogs may pass you by completely, because this is a venue that is dominated by comedy. But this venue has still managed to build a stellar reputation. having been voted Best Venue in the last two years. (Public votes should normally be treated with caution as they are open to vote-packing, but everybody I know who’s expressed an opinion on Junkyard Dogs has spoken very highly of them.) However, as a single-space 35-seater venue, so far this venue has kept a low profile compared to The Warren, Sweet and Spiegeltent. But that might be about to change. According to Brighton Fringe, next year they will have two black box spaces. This takes them up to three, just one behind the number of spaces used by Sweet and The Warren last year (albeit bigger spaces).

One complication over Brighton venues that Edinburgh veterans might not be aware of is that Brighton venues are a lot more specialised. In Edinburgh, all of the Big Four and most of the second-tier venues programme across all the major categories. Not so in Brighton; Sweet and The Warren programme a good mixture across their venues, but Spiegeltent – just as big a player – is dominated by cabaret. The last Fringe programme at Junkyard Dogs was mostly, but not completely, comedy. There again, Junkyard Dogs is hosting the winner of the Brighton Fringe Award for Excellence (and Edinburgh Fringe award where the winner gets a promoted slot at Brighton), so perhaps they’re setting their sights wider.

Could Junkyard Dogs catch up with the giants of the Fringe Venues? It’s possible – ten years ago Upstairs at the Three and Ten was a popular small venue, and that grew into The Warren. With the excellent reputation enjoyed by Junkyard Dogs, it seems like they could eventually join the supervenues if they wanted to. But: is that what they want? Might they instead decide they’d rather be small and distinctive than big and generic? Whatever the answer, the line-up at this venue next May looks set to be the one to watch. 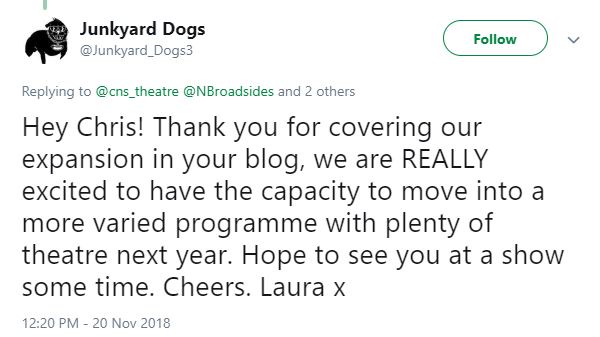 So, as suspected, Junkyard Dogs is indeed planning to expand into theatre. As for the other question – we can revisit that next year.

The big news from Northern Broadsides earlier this year was the appointment of Conrad Nelson as Artistic director for 12 months following the departure of Barrie Rutter after 25 years. He and wife Deborah McAndrew had their own productions as a director-writer team to great acclaim, and unsurprisingly the two of them have headlined the programme this year. But one thing I’d wondered was what Barrie Rutter would do. I couldn’t believe he would just drop out of theatre completely. Might he stay on at Northern Broadsides at carry on directing/performing Shakespeare, the thing that originally built their reputation – a bit like Ayckbourn stays on at the SJT for his plays?

Well, the early indications suggest the answer may be no. Their first post-Rutter Shakespeare, Much Ado About Nothing, is being directed by Conrad Nelson. At the same time, Barrie Rutter is reviving a play with Hull Truck Theatre. That is Jack Lear, a sort-of retelling of King Lear – this was produced by the Stephen Joseph Theatre ten years ago, but was unofficially regarded as a Northern Broadsides co-production back then. But it looks like Barrie Rutter is opting to give his successor space to make his mark.

We’re not quite finished speculating over Northern Broadsides just yet. The big question coming up is what happens when Conrad Nelson’s 12 months are up. Might it become permanent (maybe with the Joint Executive Director part of the job)? We’ll probably know one way or the other in the next few weeks, because if they want to recruit a completely new Artistic Director, they’ll have to advertise for one soon. Either way, it will make a big statement about one of Northern England’s most respected touring companies. 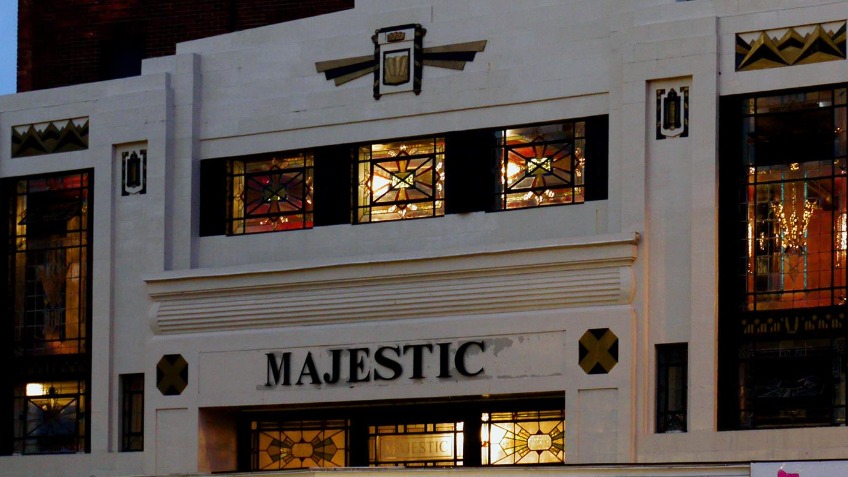 Now for something that isn’t strictly news from October, but a significant development that I’ve somehow missed over the last 18 months. A recent addition to Darlington is the Majestic Theatre, a converted cinema. In principle, this is a welcome addition to Darlington. Like Sunderland, it’s in an odd situation of having one massive theatre and not much else, and with the recent expansion of the Hippodrome to take on higher-budget acts and the closure of Darlington Arts Centre, there were few options available for any small- or medium-sized companies. Just like the Old Fire Station should do in Sunderland when it opens, the Majestic Theatre stood fill an important gap in Darlington.

Sadly, however, the Majestic Theatre has had nothing like the smooth opening of its Sunderland counterpart. The Old Fire Station was heavily backed by Live Theatre and Dance City amongst others; the Majestic Theatre, on the other hand, was very much an independent venture – which collapsed financially. And, worse, it caused several theatre companies to go out of pocket, with Blackeyed Theatre’s Jekyll and Hyde amongst them. However, all is not lost, because a new company has stepped in and taken over the building rather than let it go to waste. So the theatre is now operating again, and although it is still hitting teething troubles, I’ve heard good feedback from people who’ve worked with them.

I do hope the Majestic Theatre under new management gets more support this time, especially from the Borough Council. I realise that Darlington Borough Council is struggling for cash as much as any council, which is why the Arts Centre is no more, but that didn’t stop Sunderland throwing its weight behind the Old Fire Station. The old management have inevitably put the new management at a disadvantage because groups such as Blackeyed are going to be reluctant to perform at a venue that went bust before, but could this be mitigated if the Council (or someone) acted as a guarantor. Having got this far, it would be a shame to lose this asset to Darlington now – but a much bigger shame if it’s lost because Darlington didn’t take lessons from Sunderland.

And one other thing …

I think I’m allowed to mention this. I’ve held off saying this because, because I had an undeclared conflict of interest, but I’m now able to declare this interest. I am doing lighting and sound for Elysium Theatre’s lastest play, but the news here isn’t about me, but about what this means for Durham. Elysium Theatre was set up just over a year ago, and an interview I conducted earlier this year still has a lot of interesting information about future plans. The first three productions were all performed in the Assembly Rooms, primarily the main venue of Durham Student Theatre but slowly expanding into professional theatre. Jez Butterworth’s The River, however, is being done in the City Theatre in Fowler’s Yard. (There’s also performance at Queen’s Hall Hexham the following week, but it’s the Durham performances that’s something different.)

I probably ought to declare a second conflict of interest in that I’m on the board of directors of this theatre, but the 71-seat City Theatre too has been rising in significance. Five years ago, its sole use for plays of the resident amateur dramatic society. Lately, however, it has been hired by a variety of groups, including the Take Off Festival, student hires, touring productions (and touring student productions), but this is, I believe, the first time a professional group has made the City Theatre the main hub of a touring run. But then, this isn’t too much out of line with how theatre is changing generally. Not so long ago, professional theatre was synonymous with venues with hundreds or thousands of seats – but the rise of fringe theatre over the last decade has meant that small venues are playing a lot more roles than they used to.

Anyway, I shall refrain from speculating further or plugging further. You can read about the play on Theatre Elysium’s Facebook Page, and my involvement will appear on my other playwriting site if I ever get round to updating it. The River runs 29th novermber to 1st December at Durham, and 5th December at Hexham.

Stuff I wrote in October:

And to complete my roundup, here’s what else I’ve been writing about:

Odds and sods: September 2018: But presumably you’ve already got the gist of the format by now.

SJT Summer 2018: A round-up for four plays that made up the Stephen Joseph summer season: The 39 Steps, Build a Rocket and two Ayckbourns Joking Apart and Better Off Dead. On the whole, a strong season.

Roundup: Edinburgh Fringe 2018: Made a start on this big one. You’ll have to bear with me whilst I slog thought this – but in the meantime, this includes reviews for two outstanding plays, Vivian’s Music 1969 and Proxy.

And one thing wrote by someone else …

This was done this month rather than last month, but it’s a now addition:

Guest post: Sarah Saeed on Lava Elastic and neurodiversity: I’m hoping to do more guest posts in the future, on subjects where I have have in interest, but someone else knows more than me. This one is on a diversity initiative that, I believe, understands things better than most.

Sorry for the late post – had a packed week. One more odds and sods to go for November, then that’s it for 2018. Bye.