It’s January, it’s cold, and it’s the second month on my enforced two-month break. Last week, I did my first ever preview of what’s grabbed by attention at the Vault Festival, a list previously short enough to be a bolt-on to the end of this list. But theatre is going on in the north-east too, so let’s go through the things that caught my eye in the months leading to May.

You know the rules now, don’t you? If not, they’re here. The plays, like all plays in these recommendations, are only ever recommended if the description of the play appeal to you. But if you do, I’m confident you will like these. Some are plays I’ve seen before and loved; others are from theatre companies, writers or directors with a strong enough track record between them for me to make a firm call. So let’s get going.

The first recommendation comes from one of my main surprise discoveries of 2018: Nick Lane. Blackeyed Theatre had already made a name for themselves with two excellent gothic adaptations from writer John Ginman and director Eliot Giuralarocca – and then came a third gothic adaptation, but this was from a new name to Blackeyed fans: Nick Lane, both writer and director. Could The Strange Case of Dr. Jekyll and Mr. Hyde live up its predecessors? The answer, it turned out, was yes. This was also outstanding;  the style was different to the two Ginman/Giuralarocca plays, but it was still a great adaptation and – most impressively – it introduced a new major character and made it look like that was how the story was written all along. It’s fair to point out that Blackeyed’s production wasn’t the first production of this adaptation – it had already earned a lot of praise from two previous productions – but Blackeyed Theatre was the first company to take it on a tour of this size, introducing it to the rest of the country. END_OF_DOCUMENT_TOKEN_TO_BE_REPLACED 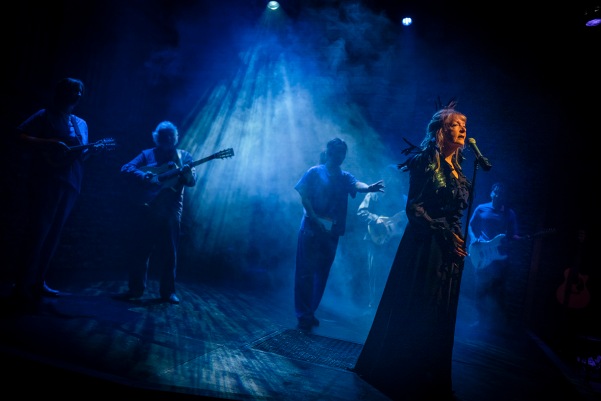 Few can argue with a directorial debut that sells out its entire run. But in this retelling of The Fall of the House of Usher, I did miss the twists of the original story.

Rightly or wrongly, there’s a lot at stake when new artistic directors make their directorial debuts in their new homes. It sets in people’s minds what kind of direction you intend to take the theatre in. Somewhat counter-intuitively, this can often happen over a year after the new artistic director is chosen, such being the timescale of programming to production. So for the directorial debut of Joe Douglas to come nine months after his appointment was announced is on the early side. Part of the reason for this is that Live was already interested in this play, and Joe was keen to pick it up. And looking at the bigger picture, it couldn’t have been a better choice, because the entire run practically sold out before the run had started.

The big draw to this play was surely the music of Lindisfarne, a north-east folk group that, as we can conclude beyond reasonable doubt, has a very strong local following. But the other draw – and the one that got me interested – was a re-telling of Edgar Allan Poe’s famous tale The Fall of the House of Usher, with the remote house of Roderick and Madeline Usher replaced with the male psychiatric ward of a short-staffed hospital. The nameless narrator is now Alison, a nurse on her first shift. Rod, the cynical senior (and only) nurse on duty takes her under his wing, but it soon transpires his own sister is committed in the same hospital on another ward. It’s such as good set-up, with the location and Alan Hull’s music providing a perfect modern gothic setting fitting of an Allen Poe story. The only trouble is, I’m struggling to identify the Allen Poe story in this. END_OF_DOCUMENT_TOKEN_TO_BE_REPLACED

SKIP TO: April, Auntie, Police Cops
A new thing for the blog. I’ve been doing recommendations for Buxton, Brighton and Edinburgh Fringes as long as I’ve been doing this blog, but the Vault Festival (not a fringe as it isn’t open-access, but the closest thing you’ll find to one until sprint comes round) I’ve always done as a footnote for my general winter/spring recommendations. That’s not because I’m giving the Vault a lesser status, but because, up to now, there were very few acts I recognised. But this time, my knowledge of what’s there is big enough to do an article in its own right.

And it’s not, I might add, based on who I’ve seen in previous Vault festivals. I’d heard of a couple of them from the Vault Festival first, but all of these artists I’ve previously seen in Buxton, Brighton or Edinburgh Fringes. Most of the artists in the Vault line-up I’ve never heard of so, as always, please treated this as a cross-section of what’s worth seeing rather than a comprehensive list. But a recommendation of something I’ve seen is not automatic – if it’s in this list, it’s in for a reason.

Normally, to get into safe choice – meaning something that I’m confident anyone who likes the description will enjoy, and has a wide appeal – a play either has to be one I’ve seen before and loved, or a group doing something new with a strong track record. This time, however, we have two entries in Safe Choice from solo performers I’ve only seen once before, but they are playing to their strengths so much I’m prepared to go with a safe bet.

I should declare a bias here. Part of the reason I loved Bothered About Dungeons and Dragons so much was how much it appealed to my anti-censorship sentiments. A long-standing tactic of censorship is to paint the thing that offends your moral purity as harmful, and make sure there’s enough public hysteria to prevent anyone actually watching/seeing/reading/play it themselves and making up their own mind. In the 1980s, one popular target was Dungeons and Dragons. Carrie Marx played Pam, a Christian busybody who’s so obviously only done cursory research and didn’t properly understand what she was talking about. But this play appealed on many levels and if you don’t relate to being on the receiving end of these scare campaigns, you might relate instead to Pam’s quietly tragic quest to find a purpose in her life. END_OF_DOCUMENT_TOKEN_TO_BE_REPLACED 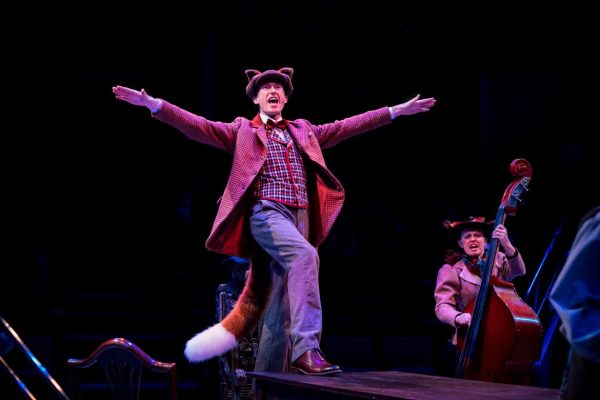 The Wind in the Willows is one of the longest-running family Christmas productions in regional theatre – and seeing it for myself, it’s easy to understand why.

What do moles and rats do when spring arrives? Go out for an idyllic boating ride and picnic, of course. “But wait,” I hear you say, “aren’t rowing boats a bit big for a mole and a rat?” Honestly, don’t you know anything? In the early 20th century, moles and ratties and badgers were all human-sized and did human-sized things, mixing with humans and subject to human laws of the land and all that. This, at least, was the premise of Kenneth Grahame’s book, originally meant as a bed-time story and ending up an accidental children’s classic. But the reason the book endures in so many memories is of course our hero, or rather anti-hero. Mr. Toad, the wealthy but vain owner of Toad Hall, is not arrogant as such: simply a flawed individual who is – if you will pardon the mixed metaphor – only human.

This depiction of Mole, Ratty, Badger and Mr. Toad as only human was, perhaps, a driver for Theresa Heskins’ choice of how to bring this to the stage at the New Vic. Plenty of adaptations use make-up or masks to represent the animals – here, however, they are better described as human embodiments of the animals they represent. The ensemble of eleven never have more than a pair of ears or a tail to show which animal they are – and it works. Because this adaptation is not using tweeness as its selling point, but instead, human personalities working and conflicting with each other: Mole, keen to be friends with everyone; Ratty, pragmatic and easy-going; and Badger, the one who knows Mr. Toad best. Mr. Toad, by all rights, ought to be the villain of the piece, throwing lavish parties to big up his own ego, never feel sorry for anyone but himself, always frittering money away on the latest fad – but he’s such an idiot over all this he becomes a lovable idiot, desperately needing his friend to protect him from himself and his new-found love of easily-crashable motor cars. END_OF_DOCUMENT_TOKEN_TO_BE_REPLACED