Skip to: The Shy Manifesto, Bacon Knees and Sausage Fingers, Bonnie and the Bonnettes

A lot of stories have been jumping the queue in this blog, but now it’s time to get back to the reviews. Two plays have been on recently about outsiders – one story about someone different through choice, and another about two people different through no choice of their own. Let’s get to it. 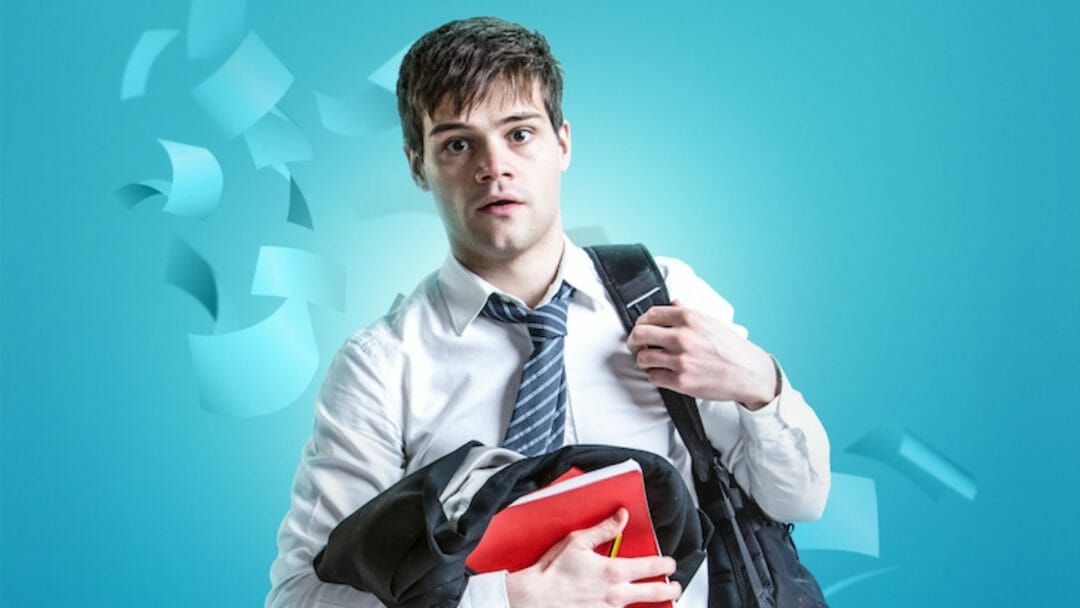 Meet Callum. He’s going to tell you all about the virtues of being shy. When I decided to see this play, I assumed the message was going to be that not all men sing rugby songs, go body building and shout “wahey” at copies of Nuts magazine and that’s okay. Callum (Theo Ancient), however, goes further than that. If “it’s fine to be shy” is the message of the moderates, Callum belongs to the militant extremist wing. That’s not much of an exaggeration either – his only friends on social media are fellow radical shy activists from across the world, passionately reinforcing each other’s beliefs, and any lapses into extroversion are punished harshly by the group.

And at this point, I will advise anyone who’s planning to see the play to stop reading this and just watch it. I shall avoid the spoilers where possible, but this is a play where it’s best to see it with no preconceptions and judge Callum for yourself.

That warning established: is Callum really all he claims to be? For a start, I’m not entirely convinced shyness is the right camp for him – he is cynical and sarcastic throughout his story, and I’m sure if he was ever to jump ship and join me in the radical snark activists, he’d fit in fine. (Slightly let down by having Morrissey posters on his walls long after he’d outed himself as a complete bell-end, but nobody’s perfect.) But key to Michael Ross’s writing is the device of the unreliable narrator.

It takes time to notice something isn’t quite right, but an early clue is the way Callum talks of his nemesis, Gilby. With a real name of David Gilbert, and swaggering into sixth form on his first day with sunglasses and satin jacket, I too might have joined Callum in thinking “What a cock”, but when the anticipated cockishness fails to materialise and instead he invites Callum to a party with all his cool friends, one must question where this hostility really comes from. One thing that may have made Callum this way is his mother’s friend Libby and her years of not-really-that-well-meaning put-downs for not being outgoing enough, driving Callum into his self-destructive militant shyness as an act of rebellion. That’s not the only factor though. The other reason for Callum’s animosity to oh-so-perfect Gilby will come to light later.

Be warned – this play is much bleaker than most. This play may be better considered a chapter of Callum’s life, rather than a moment that define his whole story, but if it’s a chapter, it doesn’t bode well for the next one. In a different story a moment of madness would have been a opportunity to learn from it and turn things round for the better; in the play, alas, Callum doubles down with more of the same. All is not lost, and a few crumbs of comfort leaves hope for the future, but Callum seems to have given up on life before his has really begun. That’s my interpretation, other people may have their own interpretations, but it’s credit to the play that the character can be discussed in such depth. Don’t expect anything uplifting, but do expect a play that’s different, and keeps you thinking long after it ends. 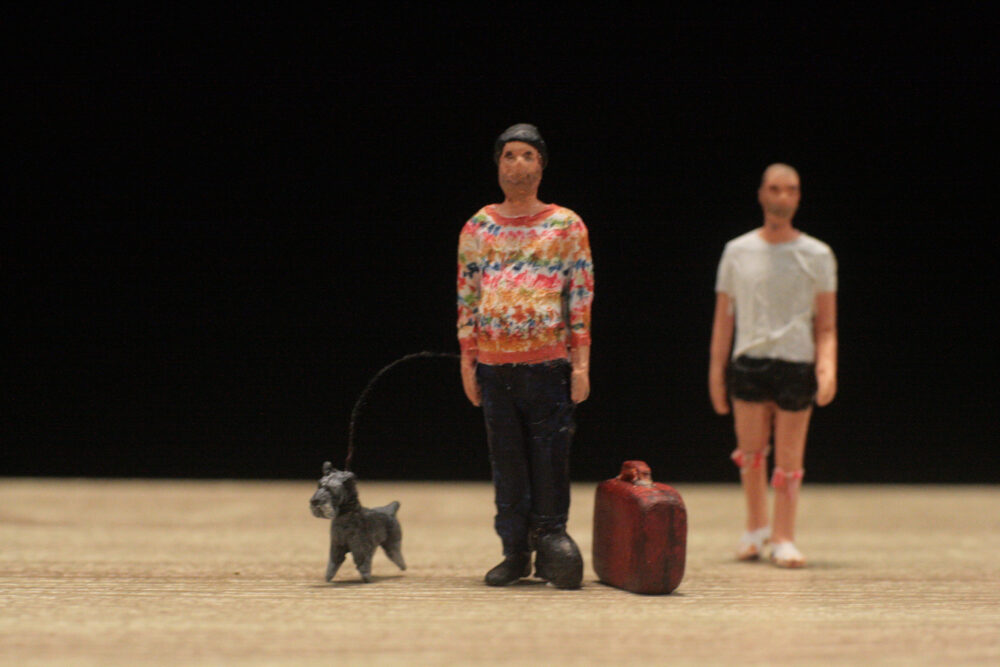 There was a time when it was a far-fetched idea that a play with a title this absurd could be a hit, but not any more. Bacon Knees and Sausage Fingers were arguably Alphabetti Theatre’s second major success in their previous venue, after The Frights, so it’s not too surprising that it has returned to Alphabetti’s new bigger venue. Written by Gary Kitching and Steve Byron, playing the two titular characters, this play centres on a chance meet-up of two of life’s outsiders on Newcastle’s High-Level Bridge. They might not want to meet each other. But they do need to meet each other.

Much of the play is of Kitching and Byron telling their stories. “Sausage Fingers”  is a man who could have been someone but he slipped through the cracks. As first taunted for a disability and putting on weight, he could have sorted his life out, but when his boss turns on him and he strikes back, nobody wins. Now written off by a father who’s more interested in dogs and novelty clocks, he has no real purpose in life. But it’s “Bacon Knees” who’s the real loser of life. A special needs child in a school that would rather keep him out of the way than help him, and parents too caught up in their own dramas to, he gets in by life through a blissful naivety to the situation he’s in. Sadly, his naivety is one of the reason he’s now homeless, and his nickname is earned by his eccentricity of strapping bacon to his knees to race dogs.

In the interests of completeness, I am obliged to inform you that this bit of the play was done on-script, disguised and two comic books. This was a slight disappointment, but only because I know it’s not that difficult to learn the lines in a play of this length. The lines are disguised in two comic books, and if there’s any play that can get away with this, it’s this play – nonetheless, it’s a small point where they sold themselves short. But the play is off-script where it matters the most, and that is at the moment of their meeting. Repeated throughout the play, with two or three more lines added each time, this cleverly interweaves with their backstories to piece together the two men both ignores and written off by society.

If there’s one weakness I’d pick with the play, it wouldn’t be the script, but the extent of Bacon Knees’ naivety. A lot of it is all too believable, and I’m prepared to believe he would be overjoyed about being put in a special class because he’s special. But I find it hard to believe he’d have a complete lack of self awareness all of the time. He often gets into trouble for doing things that make other people think he’s a kiddy fiddler, and he has no idea he’s done anything wrong – but I would have thought that he would have at least realised he’d done something wrong, even if he wasn’t sure what it was. The way he blithely talked about being kissed and cuddled in prison also didn’t ring true. To be fair, in the ending, it suggests that he’d been bottling up how he really felt about this, but had the two stories done more to capture the personalities of the people telling the stories – taking in their evasions, regrets and self-justifications – I think this would have strengthened the play and especially the ending.

However, there’s no denying the success here – a three-week run is unprecedented, and even this was selling out towards the end of the run. It’s not hard to see why: Bacon Knees and Sausage Fingers, once you look beyond the strange title, is a warm and compassionate story about the people who society forgets, and how things can change when someone notices. Without wishing to spoil the ending, the play ends with in improbable unexpected event that shows there’s always hope. Intentionally or not, this is a metaphor for the whole play – the improbable meeting of the two men that brings hope for both.

And the response piece …

I’ve never entirely subscribed to the concept of response pieces. They are often enjoyable, but usually I don’t see much of a connection with the play they’re supposed to be responding to. Nevertheless, the response piece from Bonnie and the Bonnettes deserves a mention because it was a nice thing to see. I probably ought to add a disclaimer that if you’re not familiar with Bonnie and the Bonnettes, you’ll probably not be sure what’s going on. But that’s okay, you can still enjoy this if you’re not following it.

Sharing the theme of Bacon Knees of some strangers meeting, this is set in the outdoor smoking area of a gay and lesbian nightclub. Hattie play a woman who thinks she’s a lesbian and therefore is obliged to go out clubbing and pull all the birds. Becky plays another woman who’s out at the club for little other reasons than something to do after her grandmother who she lives with goes to bed early. Cameron, meanwhile, has the hots for the a hot guy on the dance floor. It’s not clear whether Cameron is playing a man or a woman here, but that’s kind of the whole point here.

This is more a snapshot of life than a full story in its own right – nevertheless, there are some nice touches in here. Hattie’s character learns that coming out – if she is coming out – doesn’t mean she has to embark on a shagging spree, whilst Becky’s character’s grandma seems to be more accepting than everyone gives her credit for, having asked here whatever happened to that nice girl who came for breakfast once. Even if I’m still not sure what this has to do with the play that came before, this complete a set of three plays about friendships on the fringes of society, all of which were pleasing to watch.