COMMENT: There are valid reasons to criticise independent reviewers – but writing “entertaining” reviews at the expense of saying anything helpful is worse than anything so-called pop-up reviewers are accused of doing.

I apologise for burdening you with yet another anti-Scotsman article. I was planning to let this go after my original article on why you should think twice before letting The Scotsman review you, but then came Kate Copstick’s bizarre passive-aggressive column for Broadway Baby, seemingly unable to let go of her outburst the year before over comedians exercising their right not to give out press tickets for previews. So I wrote about that hoping it would be the last time. But now I’ve come across this article in the Edinburgh Evening News: ‘It’s these pop-up reviewers who haunt festivals such as Edinburgh Fringe that have done much to devalue the review as an art form’. Oh dear, oh dear, oh dear, this is bad. It’s not entirely clear what is meant by “pop-up” reviewers – most of the time it seems to be independent bloggers such as myself, but it’s vague and possibly extends to pop-up review sites. The only people cited as valid reviewers are – yes, that’s right – the reviewers at The Scotsman, co-incidentally the sister publication of the Edinburgh Evening News.

Even though this piece is a blanket attack on people like me, I’m going to refrain from making personal attacks back. Unlike Kate Copstick and Paul Whitelaw, who both squandered all my respect a long time ago, Liam Rudden, by all accounts, is highly thought of as both a theatre maker and an arts journalist. And yet the way this article is written, it reads like a hit piece sanctioned by the fringe editors of The Scotsman with Liam Rudden acting as a proxy. So let’s respond. END_OF_DOCUMENT_TOKEN_TO_BE_REPLACED

The endless growth of Edinburgh Fringe has provoked a debate on two big issues: the affordability of the Edinburgh Fringe, and the conditions for workers at the venues. But there is a third issue that also needs attention, which is what effect Edinburgh has on the locals of the city. Is it a chance to enjoy the greatest cultural festival in the world on your doorstep and take an annual windfall? Or does it make your own city inhospitable for a month every year? I haven’t commented much on this as I don’t live in Edinburgh and don’t know much about this issue.

So let’s get the perspective of someone who does. Flavia D’Avila lives in Edinburgh. Coincidentally, she is directing a play that is coming to Edinburgh this year (which I happened to see at Buxton and loved), but she is more importantly someone who I’ve seen commentate on contentious issues at the Edinburgh Fringe and elsewhere in a fair and thoughtful manner. So here is the perspective of an Edinburgh Fringe local …

I first moved to Edinburgh in 2006. I arrived the day before the Fireworks Concert that year, so I had just missed the Fringe but that was one of the reasons I decided to move here from Brazil. I had never been to Scotland and had no personal connections here but I had my mind set in Edinburgh as a good place to develop my theatre career after the suggestion of an English friend living in Brazil and reading a short article in a local newspaper about the Edinburgh Festivals.

I skipped 2015 because of issues with the Home Office (that’s another story that you can read on my personal blog here), so 2019 is my 12th Edinburgh Festival Fringe and although I am sadly still not entitled to a Scottish passport, I feel very much like a local here. That said, during the Fringe, I’m not just a local. I’m part of it. So when Chris kindly invited me to write this guest post reflecting on the Fringe impact on the Edinburgh locals, I gladly accepted but I feel the need to warn readers that my experience is that of a local theatremaker who is very much embedded in it all. That part of me absolutely loves the Fringe. Part of me also hates it.

I can’t tell you much about the experience of the other locals, those who just want to be able to get to work in an office or need to pay a bill or go the library and get annoyed because the Fringe keeps getting in the way. I got little insights here and there, like when I was speaking to a bouncer who sometimes works at the venue where I work year-round. He rarely goes to shows that he’s not working at and doesn’t really care much for it. He enjoys some music gigs and has done some private security for Kylie Minogue in the past so he was delighted to see her at Edinburgh Castle last month. He isn’t super keen on how busy the city gets but he also acknowledges that August is his best month for business so he works his ass off and then he takes his family away for a 4-week holiday in some remote beach resort in January. Although he doesn’t engage with the Fringe, it allows him to have some quality family time a few months later. END_OF_DOCUMENT_TOKEN_TO_BE_REPLACED 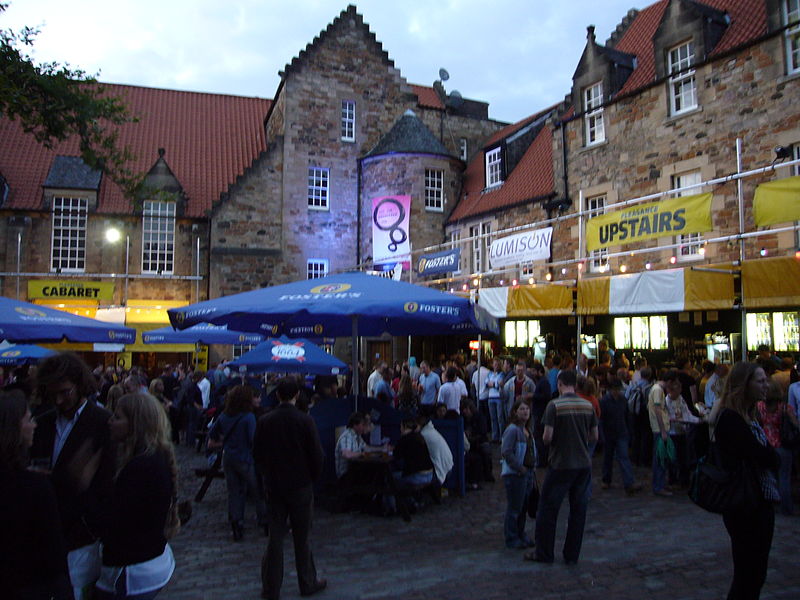 Apologies for the late arrival this year – a lot of things have been happening with inconvenient timing this year. But Edinburgh Fringe is already in its first weekend and I’d better get a move on.

So, welcome to Edinburgh Fringe 2019, the biggest Edinburgh Fringe ever by a long way. There was a time when this news prompted all-round celebrations – not any more. Questions are being asked everywhere of the affordability of Edinburgh, both to performers and punters, and last year the issue of working conditions has also joined the debate. But these issues were all the rage last year, and none of this is stopping the growth. This issue must surely come to a head eventually, but it looks like it won’t be this year.

Instead it’s business as usual. I’ve looked through the programme and picked out a selection of plays I think are worth seeing. As always, I must remind you that this should be considered a cross-section of what’s on offer rather than a comprehensive list – most of the listings are plays and acts I’ve never heard of, some of whom will be as brilliant as anything I list here. However, I have set a new rule for Edinburgh: performers get a maximum of one recommendation per category. Some groups are bringing several plays to Edinburgh and I have confidence in all of them, but in order to stop smaller artists getting swamped by all these entries I have to do something to keep the list down to something manageable. Where a group has other plays of note, I will list those against their entry.

So we start, as always, with the top tier. Most safe choices are plays I have seen before performed by a group I’ve seen before; occasionally, however, a performer has had such an impressive record I’ve put a new play straight to safe choice.

In all cases, this is a surefire recommendation if – and this is the big if – you think this play appeal to you. Few plays appeal to everyone of every taste, and if you don’t like the sound of the play, all the five-stars in the world won’t change this. However, all of these plays are considered to have wide appeal, if you like the sound of this I’m confident you’ll like it for real, and even if it’s a bit different from what you usually see it may be worth giving any of these a go. They are:

One of the greatest pleasures of going to fringe after fringe is the rare occasion when obscure newcomers go on to great things. Bite Size’s sets of ten-minute plays was something I saw in 2016 in the smaller soom of Roman Eagle Lodge, then the bigger room, then a bigger space in Gilded Balloon, and for the last few years they’ve been a headline performance at Queen Dome, one of the Pleasance’s biggest spaces. But there are bigger ones, and this year they’re in Pleasance Forth, one of the biggest of all. That’s about as big as you can get, and the full journey has been done. There is one touch of sadness attached to this: the earliest runs worked very well with the intimate setting of a small audience. But it would be impossible to go back to this now – in recent years the tickets have been selling out solidly, so there really was no option but to go large. (And even then, I am hearing that the Monday and Tuesday in week one, always in high demand because of two-for-one deals, have sold out already.) END_OF_DOCUMENT_TOKEN_TO_BE_REPLACED