COMMENT: It won’t be easy to find a right balance when programming controversial acts in publicly-run venues. But neither unofficial blacklists nor political intervention are the way to do it.

Oh dear. This almost passed me by, but there’s been a pretty major controversy over at Middlesbrough. Roy Chubby Brown is coming to Middlesbrough Town Hall in spring next year. Given the, shall I say, “contentious” nature of Roy Chubby Brown’s material, that alone raises a few eyebrows. But the really controversial bit is not the decision itself, but how the decision was made. The management had originally refused the booking – it was the newly-elected Mayor of Middlesbrough who overruled them, and the manager of the Town Hall resigned apparently in protest.

In the end, however, something like this was bound to happen. The issue over venues refusing to programme Roy Chubby Brown goes back years, with reasons for refusal rarely being more specific than “it’s offensive”. And with so many venues owned by their respective local authorities, it was only a matter of time before someone higher up took the view that people who are offended don’t have to watch it. I wasn’t expecting things to come to a head so close to home, but in hindsight, it’s not too much of a surprise it happened in Middlesbrough – and not just because this is his home town. I will come on to this reason later.

So here we go again. As this raises questions about censorship and this is an anti-censorship blog, it’s time for me to give my thoughts. I don’t respond to every story that’s a censorship issue, but the main reason for this one – apart from the fact it’s happened on my doorstep – is that this shines a spotlight on two practices that normally have no scrutiny: one is how arts venue managers choose to programme at publicly-owned facilities; the other is how and when people higher up intervene in the running of these venues. And on this one occasion where we get an insight into what happens behind closed doors, it’s worrying for a lot of reasons. END_OF_DOCUMENT_TOKEN_TO_BE_REPLACED

Another autumn, another programming of Ayckbourn plays at the Stephen Joseph Theatre. Sticking with the long-standing pattern of the last decade, there were two Ayckbourn plays this year: a revival of a classic in the summer – another one from the height of his commercial success – and a new play in the autumn. But wait … I have a third Ayckbourn in the list, that’s officially not affiliated with the SJT, but in practice has a strong connection. But we’ll get to that in a moment. Let us begin with the two plays on at Scarborough. 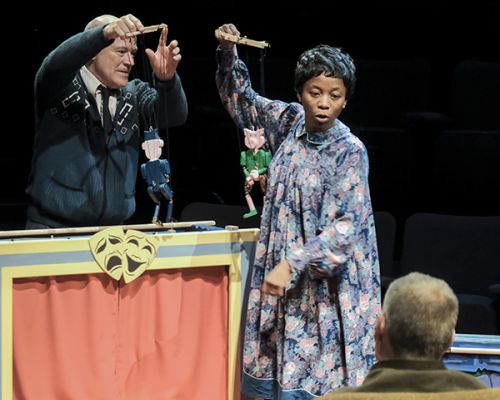 Astute though Alan Ayckbourn is with his observations of human character, there is one thought that frequently goes through my head when I see an unflattering character in one of his plays: “I pity the poor bastard who this was based on.” Off-hand, I can’t think of anyone this applies to more than poor old Bernard, artistic director of the worst puppet show in the world. Bernard thinks – or has at least deluded himself into believing – that his Christmas plays for the kids are a delightful annual family tradition. For everyone else, it’s notorious, with simple fairy tales padded out to snails pace; add in the numerous complex scene changes (sixteen in this year’s performance of The Three Little Pigs And Their Wives And Families) and the play turns into an endurance test. Who was this person? Who did these awful puppet plays in real life? The answer surprised me.

END_OF_DOCUMENT_TOKEN_TO_BE_REPLACED 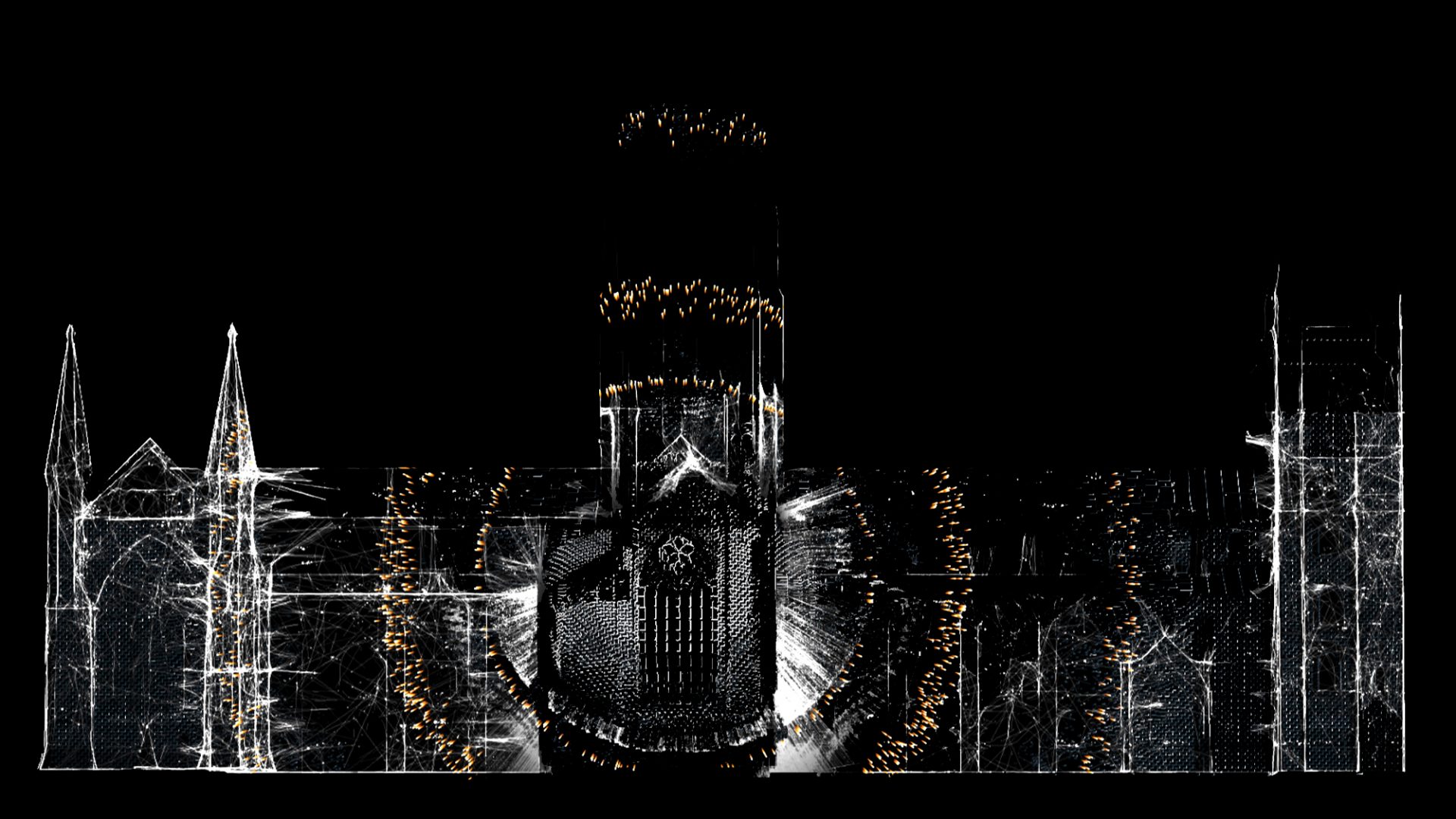 Here it comes again. Lumiere is coming back for its biannual festival. With this being ten years since the first festival in 2009, this festival has been billed as an anniversary celebration with many – but not all – of the installations being favourites from the last five festivals. Two months ago I came up with my own wish list, which lead to Artichoke’s social media team describing me as a superfan, which I though was a bit much until I realised that I’m probably one of very few people who not only goes over all four nights but also goes to Lumiere London every time it’s on, so I guess that’s fair enough.

One word of practicalities before we begin. Blog regulars will know I always say this, but for anyone new: unless you are bringing young children who can’t last into the later evening, you do NOT need a ticket to make the most of Lumiere. When the organisers say may sound like a platitude for anyone who didn’t manage to get one, but they are 100% correct: there is more than enough to keep you busy from 7.30. About two thirds of the festival takes place outside the penninsula, and there’s still a real festival feel. Although it’s true to say that most of the best stuff is inside the ticketed area, it’s an easy enough task to see this after 7.30 when the ticket restrictions are lifted. If you’re only coming on one night, you can make the centre your finale.

Anyway, as always, I’ve looked through the programme and come up with a list of highlights. This time I’ve had to be especially choosy – there’s a lot of things coming back that I liked, but I’ve already got a third of the festival listed here and that’s about the limit. So without further ado, here we go. END_OF_DOCUMENT_TOKEN_TO_BE_REPLACED

Another month, another delay to a Mad Max-style apocalypse. So I can take a break from stockpiling tines and loading a the shotgun to ward off the mutants and get back to what’s been happening in theatre. 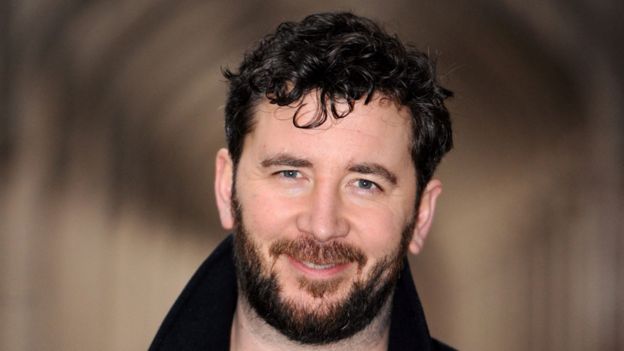 egin news from October with the biggie, and quite unexpected. Lorne Campbell, artistic director of Northern Stage, is stepping down. He’s not been at Northern Stage that long either. When someone leaves a post like this abruptly, it’s always tempting to speculate if he jumped before he was pushed – here, however, it’s not very likely. He is moving on to be artistic director of the National Theatre of Wales, which can be looked on as a promotion. However, it still means that, once more, chrisontheatre gets to play it’s favourite game of waiting for the announcement of the artistic director, and – more importantly – considering what this means for Northern Stage’s future. END_OF_DOCUMENT_TOKEN_TO_BE_REPLACED

This is an article I’ve been thinking of writing for some time, but with a few comments lately about the ethics of reviewing, it’s spurred me into action. This is primarily aimed at my own reviews – however, most of what I say will will usually apply to other reviews too.

When I started this blog off, I never expected bad reviews to be an issue. Being a performer myself, I wasn’t comfortable with badmouthing fellow performers, so I used the tagline “review of stuff that’s good” and adopted a principle of only reviewing things I liked, similar to FringeReview’s policy (who, incidentally, also prefer reviewers to be performers themselves). However, what was a simple policy in theory has turned out to be more complicated in practice, especially after I started getting invited to reviews at the Edinburgh Fringe. One thing I quickly learned is that most people prefer a middling review to no review at all – some people like constructive feedback, some people want reviews on the record as evidence that they’re out there. And when you’ve got a ticket for free, it’s harder to justify writing nothing in return.

So the principle I operate on now is that I write a review if I can either say something good or say something helpful, or both. Only a small number of plays I see are neither of those. Nevertheless, there is the old saying of “There’s nothing so damning as faint praise”, and if a review showing mild enthusiasm for certain aspects is next to a review praising another play in every way possible, I can see why it might be a disappointment. The only way I can see of avoiding this would be to be equally positive about everything I see. But I don’t think I would be doing anybody any favours if I did this. Once people cotton on to fact you say everything is awesome, praise becomes worthless, whether or not it was earned.

It’s never easy to predict how people will react – some people have been thankful over reviews I thought was only lukewarm, and other people have seemed disappointed even when I thought my review was quite good. But whatever your reason is, if my review was less than you were hoping for, this article is for you. This article is also for anyone who gets a less-than-enthusiastic review from anybody else. The short answer often given is that it’s only one person’s opinion, and that is correct. But looking a bit deeper, what does that mean for you? END_OF_DOCUMENT_TOKEN_TO_BE_REPLACED