So, this is one of the strangest fringe previews I will be writing. For the benefit of anyone who’s time-travelled from 2019, we’re having a bit of a lurgi at the moment and all the theatres are closed. The most notable casualty is Edinburgh Fringe, which has been outright cancelled (although there is speculation that some of the venues may opt to put on a reduced festival in August anyway if they can). Brighton Fringe is more fortunate – without the need to recruit masses of temporary staff and hire out every space in a university during vacations, they are planning to postpone, and on my grapevines the mood is getting increasingly optimistic. (Buxton Fringe’s neighbour, Greater Manchester, has also opted for an autumn fringe, although with Manchester having a year-round fringe scene, they could easily form a programme of shows that would be on anyway.)

Buxton’s response, however, was a bit of a surprise. I was expecting them to also postpone, possibly making use of the vacant August slot in the fringe calendar. However, Buxton Fringe chose to dig their heels in and press on with July no matter what, even if it meant doing the whole lot outdoors and online. And with the latest news being that theatres can open but not do theatre in them, and outdoor and online festival is what we have. It’s mostly online, but there are a few physical events, mostly in the visual arts section.

Now, one obvious query is what does the Buxton in Buxton fringe mean if it’s nearly all online. After all, if the videos can be produced anywhere and viewed anywhere, how is this different from any other online festival. Well, one obscure feature of Buxton Fringe has suddenly become a very useful identifer: their internal reviews. One thing that the online fringe entries will have in common is reviews under the banner of the fringe, and with the fringe review publications being thin on the ground at the moment, this could be the most reviewed event of the summer. But the other thing that has shaped the festival – something that I suspect even the Fringe Committee didn’t bank on – is loyalty from a lot of the groups. Buxton has managed a respectable 100+ entries, and heavily featuring in the programme are performers that come back year after year.

I’m old-fashioned myself – I think watching theatre online is cheating and I’m determined to turn up in person even if all I can do is the visual arts. But let’s see what’s of interest:

I’ll be saving safe choices and bold choices once we’re back to proper physical fringes, but amongst an online-heavy programme the following things got my attention.

(All performances are available online throughout the fringe form the 1st-19th unless otherwise noted.)

Nathan Cassidy is a name I’ve frequently seen at Buxton, but with my focus being on theatre, I’ve never seen him nor heard that much about him. Nevertheless, to scoops top spot on my listings for doing what no-one else at Buxton has achieved this year: a physical performance. Yes, as it stands it’s going to be outdoors and he can only sell five tickets to keep in a legal limit of six, and yes, it’s a surefire loss-maker that will get minimum audience reach for maximum effort, and the only reason you’d want to do something like this is sheer bloody-mindedness. And that’s good. The editorial board of Chrisontheatre admires sheer bloody-mindedness and rewards it accordingly.

I don’t know what bits of this show were written when, but it looks like recent events account for a lot of it. The original theme of this show was the secret of happiness, but the country’s expirence of lockdown has since been written into the show along with numerous other events. I probably should mention that this is billed as a work in progress, but quite frankly, I doubt anyone will notice or care. The tickets are probably already sold out, but if you think only live performances count you turn up to the vicinity The Old Clubhouse at 7 p.m. Pretend you’re having a socially-distanced drink or something and peer through the group and you can say you’ve seen a Fringe show this year.

It’s quite a strange experience seeing yourself quoted in the blurb, but I promise this would have been a pick with or without – it truly was an unexpected gem. In 2018 Joanna Lavelle played three characters connected to the case of a child porn sex offender: the wife of the accused, a police officer, the mother of a victim. The consequences of the act stretch beyond perpetrator and victim. A lot of credit goes to writer Michael Sheath, who drew on the observations from his job. There is no sensationalism or pantomime villains in this play, but what you hear reflects reality very well.

This time, there’s a fourth story, and that’s of the perpetrator. We never did quite work out why he did it – was he an amoral scumbag who felt sorry for no-one but himself, or might he have been trying to make sense of something that happened to him? That will be a far bigger gamble than the first three stories, but it’s a gamble that needs taking. Unlike most online theatre, which is often a second-best substitute for the real thing, Crossing the Line is genuinely a script that works equally well as stage monologue or screen monologue. I hope this will be back live when the time comes, but in the meantime this is worth a watch.

I saw this at Buxton Fringe last year, and luckily for both Some Kind of Theatre and Buxton Fringe they took the opportunity to record this last time round. This is an interesting play about the origin of the Grimms Tales. The Grimm Brothers are thought to have had “traditional” views of a woman’s role of the time – one change they were known to make is changing the baddie in Hansel and Gretel from a wicked mother to a wicked stepmother, because motherhood is wholesome and apparently stepmotherhood isn’t or something like that. This imagines how other tales were changed into more predictable gender roles.

But before you get too enthusiastic about the original empowering versions, be warned that pre-Grimms version are in many cases even more fucked up than the Grimms versions, and that’s saying something. I am still scarred by their opening view original Little Red Riding Hood, and for anyone who objects to kissing an unconscious woman in Sleeping Beauty – oh boy, you ain’t seen nothing yet. It’s an interesting watch that makes you think about a lot of things, so it was fortune they took a recording of this.

Now for one from the fringe archives. Rampant Plays has this play refined in various fringes in the early 2010s finishing with a successful run at Edinburgh. The play covers an imagined meeting between the two chess masters, Kasparaov and Karsov. Today chess might be a niche sport, but during the cold war it was up there with who could get a man on the moon – except that the USSR most definitely won on chess. Now interest has moved on, and these two men are quite possibly detinated to be the greatest chess players of both the 20th and 21st centuries.

The online version is being done as an audio play, which I think will suit this script well. You have to concentrate when watching/listening to this play no matter what, but it’s all in the words. I will probably miss the chessboard which was the visual focus of the play, but expect the script to stand up on its own.

There are a lot of online plays around about lockdown, so apologies to anyone who is already sick of this, but it’s definitely worth checking out because it’s written and performed by Debbie Canon, who did Green Knight last year and the year before. That was a clever retelling of the legend of Gawain, keeping the story the same but adding in a new perspective. We only have a few clues as to what’s in these three 10-minutes monologues, but there’s a lot to live up to. This goes online from 6 p.m. 13th July.

One side-effect of lockdown has been to bring old names back into the roles they used to do. We have already seen Alan Ayckbourn make a return to acting, but long-time Buxton favourites Three’s Company have gone one step further and brought back their elusive third member, and so Tom and Yaz are joined by Michael Grady-Hall.

This promises itself as a completely serious podcast on theatre which is not in any way about the adventures that keep interrupting them in every episode, so knowing Three’s Company the adventures will be exactly what it’s about. They promise some famous names in this podcast, which normally I would put down to being another Three’s Company in-joke, but having now made it as far as Trafalgar Studios in the West End, I think actually mean it this time. If I have understood the info correctly, this is a series that launches on at Buxton Fringe on the 3rd July with the first two episodes, with a third episode coming two weeks later and subsequent episodes running beyond the fringe.

Since all but one li 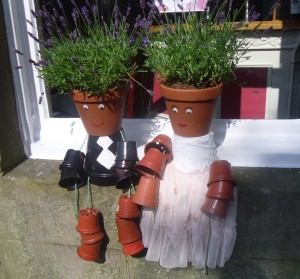 ve performance is off, if you won’t settle for a Fringe on the end of the computer attention turns to the visual arts. Other people will no doubt have other priorities or an eye for technical detail, but for me, there’s nothing cooler than the Buxton Flowerpots. This has been going for a few years, and whether or not you count this as an official part of the fringe, it’s become a landmark of any fringe visit in July.

It’s charming little novelty of flowerpot figurines throughout the town, and I’ve never ceased to be amazed by the inventiveness. But what is normally side-show compared to the venues is now suddenly the most prominent feature of Buxton Fringe. If you are determined to visit Buxton in person, make sure you appreciate this on your travels.