COMMENT: The Rare Earth Mettle debacle exposed that the Royal Court did not take complaints of anti-Semitism seriously – but there’s little reason to believe any other theatre would have behaved any better.

A common mistake made by theatres in the regions is to obsess over the latest drama hitting a London Theatre. Nine times out of ten, it’s a local issue of little consequence elsewhere in the country – or at least not as bad as more serious issues on your doorstep your local theatres are ignoring *cough* *cough* *cough* *cough* *cough*. If this uproar over the naming of a character at the Royal Court was only a London issue, I would quite happily have left it to Londoners to argue over. However, this one I believe goes deeper than a local row. I am in agreement with the majority of people that the Royal Court has screwed up big-time, but I’m not convinced it’s wise to single out one theatre here. I fear this is a symptom of an endemic nationwide problem.

So, for those who need to catch up, this is all about a play at the Royal Court satirising billionaire, master bullshitter and possible Bond villain-in-waiting Elon Musk. Now, I could put a lot of energy into why Hyperloop and all his other miracle transport solutions are bollocks, but that’s a different story completely and not for a theatre blog. Everyone was fine with this play until the name of character based on Musk was announced: Hershel Fink. Cue outrage from all Jews in London (pretty much) for stoking stereotypes. The Royal Court apologised and agreed to rename the character to Henry Finn, which might have settled things down had they not attempted to blame their mistake on “unconscious bias”. Then a Sunday Times article (£) came out that suggested this concern had previously been raised and ignored, prompting a second statement promising to reflect further. It could have been worse, but boy, what a fiasco.

END_OF_DOCUMENT_TOKEN_TO_BE_REPLACED

Skip to: The Offing, Road

We’ve already had the tentative relaunches of the big two in the north east back in September-October, but now it’s really back to business. It’s not the first time since 2020 we’ve had a play on a main stage – Live has done several by now – but it is the first time we’ve have something on a multi-week run and full budget.

Both theatres went for something that seemed like a safe bet. Northern Stage took a classic play that catapulted a household name playwright to stardom that promised to resonate with the north east; whilst Live Theatre partnered with another theatre to adapt a recent book that took the publishing world by storm. Surely nothing can go wrong?

Well, let’s see how safe these safe bets really were.

Although The Offing is a co-production between Live Theatre and the Stephen Joseph Theatre, artistically this very much the product of the latter (with the former sharing the run largely due to the association of Paul Robinson and Graeme Thomson dating back to Theatre 503 days). The early reaction from the SJT half of the run suggested we were in for a good one, and it does not disappoint.

END_OF_DOCUMENT_TOKEN_TO_BE_REPLACED

So it’s on. I had some doubts over this one. Lumiere already had the good fortune of being a biannual festival that skipped 2020, but 2021 has been far from a normal year for festivals. Brighton and Buxton Fringes operated on a reduced scale, Edinburgh Fringe limped on at a fraction of its normal size, and in Durham both the Brass Festival and Miners’ Gala were cancelled a second year running owing to continued uncertainty over restrictions. Would Lumiere meet the same fate? The outlook for November wasn’t any better than the outlook for July.

One thing we’ve learnt from experience is that yes or no decision usually gets made when it’s time to commit the money. An event cancelled a four months’ notice is only embarrassing. An event cancelled at two weeks’ notice is embarrassing and a financial disaster too. But the crunch came and went and … Lumiere is go. It is not clear what factors went into the decision, but one thing that must surely have counted in its favour is Durham’s 2025 bid for City of Culture. County Durham’s strongest asset is its festivals, and it would have been been a big setback to axe its flagship festival at this vital moment.

However, things aren’t quite the same this year. As an outdoor festival, it doesn’t have the same risk as big indoor events, but as veterans of the 2011 festival can tell you, it can still get dangerously crowded without plague thrown into the mix. As a result, crowd control measures have been stepped up, and this plus the influence of City of Culture has meant quite a few difference.

END_OF_DOCUMENT_TOKEN_TO_BE_REPLACED

So now that I finally have the time to do this, I intend to do a big catch-up on my reviews. Now, the festival fringe and the West End may have hit the ground running in the spring and summer, but most regional theatres played it safe and waited for the autumn. However, there was a bit of theatre activity in the regions, and a lot of it was focused on outdoor performances. Although there was never a point in 2021 where outdoor theatre was permitted but indoor wasn’t, those performances in 2020 that went ahead outdoors did quite well and for some the idea stuck.

A lot of the outdoor performances happened at the Festival Fringes, particularly Brighton – those I am covering in their respective roundups. But apart from that, there were two performances that particularly caught my eye. 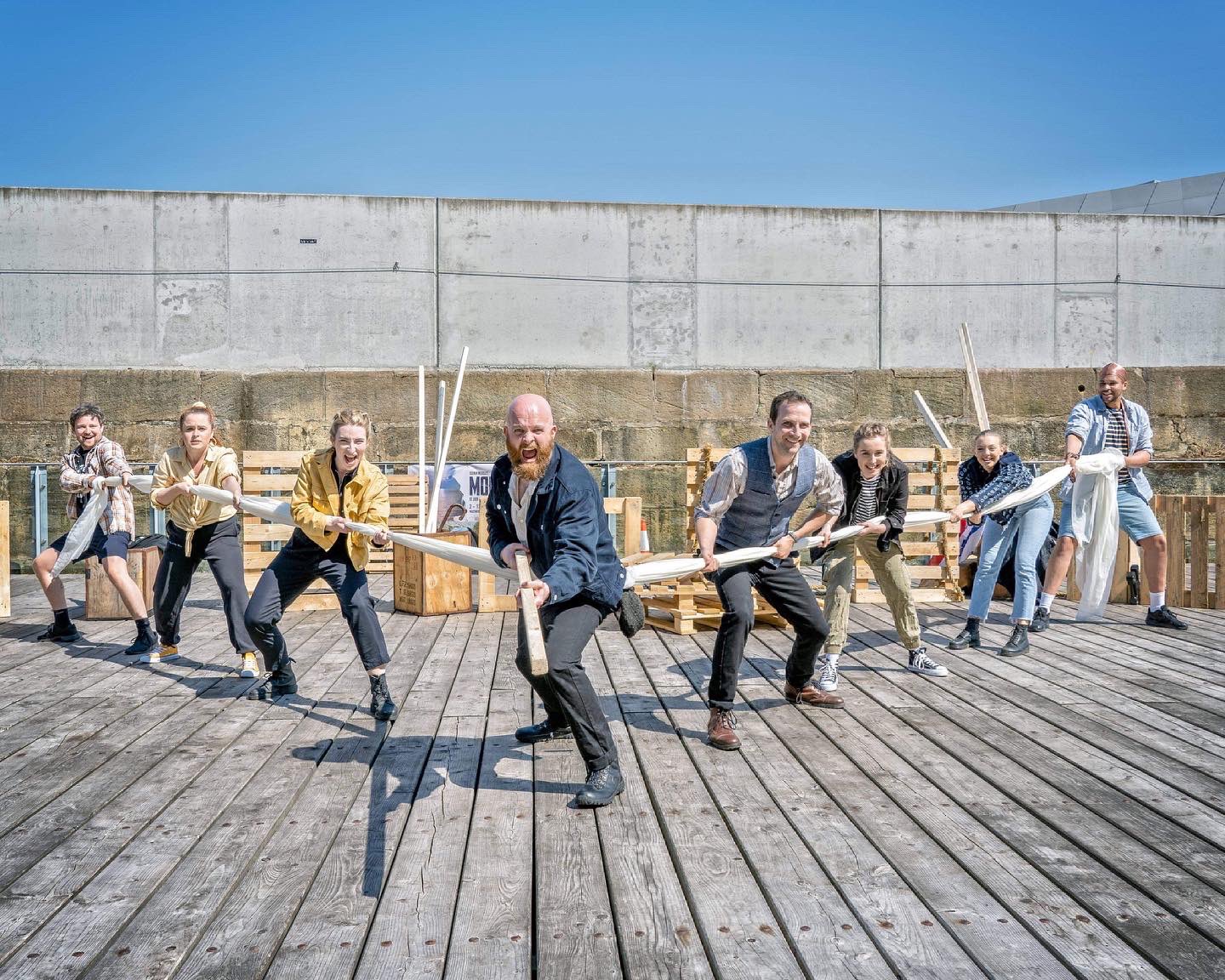 The John Godber Company has been one of the most determined companies to perform on in any way they can, although it’s fair to say they were at a bit of an advantage here. With the Godber family themselves taking on so many roles over the years, it was an easy matter to put on a family event with Sunny Side Up. I would like to have told you about that, but the performances were very popular and sold out quickly. However, not all John Godber performances are family affairs, at to get back into the swing of things this year, they put on one of their largest productions to date at Hull Marina.

The first thing I will say is how much I love the venue. Stage @ The Dock came about from a regeneration of the Marina and presumably came about in part from Hull as 2017 City of Culture. Obviously it’s at the mercy of the weather, but on a balmy evening it’s a great place to see an outdoor-set play. With the John Godber Company having helped bring this space into the spotlight, I hope it’s not forgotten about now that indoor theatre has got going again.

For once, a John Godber Company play features writing from someone other than a Godber, for this is a collaboration with Nick Lane, who is writing most of Blackeyed Theatre’s current plays as well as many of the Stephen Joseph Theatre’s Christmas plays. The challenge of most adaptations is choosing what to keep in and what to leave out: with the exception of the shortest of short stories, it’s near-impossible to stick to original plot point by point and hope to be done in two hours – and certainly not Herman Mellville’s epic of a book. The best focus I think you can put on a stage version of Moby Dick is the suicidally dangerous obsession of Captain Ahab – and that’s precisely what is done here.

END_OF_DOCUMENT_TOKEN_TO_BE_REPLACED

So, it’s back to business, and for old time’s, sake, I’m going back to my monthly odds and sods updates being late. I would have got it out on time, but a certain shitstorm blew up that I had to write about first. But now that this is out of the way (for a moment), let’s catch up with what else has been happening.

Stuff that happened in October:

So the big thing that happened – not quite theatre news but still very relevant to north-east culture – was SSD Concerts. Previously making a name for themselves back in April by allegedly going round groping everybody, after the MD implicated in this resigned, we thought we’d heard the last of the MD, or SSD Concerts, or groping, or all three. Nope. It now looks like they thought they could lie low a few months and then just carry on like nothing had happened. The good news is they thought wrongly, and didn’t get away with it.

However, the less prominent news stories, involving people who – as far as I’m aware – don’t behave like sex cases, are:

The excitement at the start of this month was the news that Durham has made it through to the longlist of City of Culture 2025. One important point is that it is Durham County that is bidding for this rather than just the city. This makes use of a rule change that this time round, regions can bid for the title – it need not be a specific urban area. This suits the bid, because ever since Durham County Council became a unitary authority, they’ve been promoting the culture of the county as a unit. Events such as Kynren and attractions such as Beamish are routinely alongside events and attractions in Durham city itself.

END_OF_DOCUMENT_TOKEN_TO_BE_REPLACED

Right then. I spend a couple of days out of the loop getting a play ready, and when I finally start to catch up on things, I drop right into the middle of this shitstorm. I, along with most people, thought we’d heard the last of SSD Concerts and its manager Steve Davis back in April, after all the allegations of sexual harassment appeared on the Glassdoor review site. But unlike the management of Tyneside Cinema, the Vice-principal of Ballet West, Noel Clarke, and pretty much every else who resigned and disappeared for good, it now looks like Steve Davis thought he could step back into his role quietly once all the outrage had died down. And, boy, that’s backfired big-time.

And so, yet again I have to write about the subject that just refuses to die. No matter how many times these scandals erupt and people face consequences, it seems there are still people who will never learn. The only good news is that, this time, some people who I’d previously criticised for not taking action have pleasantly surprised me and earned my respect. Only some, mind.

Most of this has already been covered by people less pressed for time than me. If you’ve caught up elsewhere, you won’t find any new information here. I will, however, add a few thoughts of my own.