Time for another catchup from my jam-packed summer, as this time it’s over to the Stephen Joseph Theatre. They stood out from the crowd amongst regional theatres, because whilst the festival fringes and West End dived into summer 2021 raring to go, most theatres regional theatres played it safe and waited until the autumn. It should have come as no surprise that the Stephen Joseph Theatre hit the ground running – they make an admirable job of running in 2020 when most theatres wrote it off as a doomed venture.

But whilst there’s been a lot of good will amongst audiences and reviewers, that doesn’t guarantee a good review from me. I’ve already covered their co-production with Live Theatre The Offing (which I bumped forwards as it was still running and deserved some publicity), but now let’s wind back and see how their earlier two productions did.

One of the most memorable rallying cries I heard from the start of the pandemic was one that put things in perspective. I’ve lost the original quote but it went something like: “In the 1940s, the British put everything on the line for their future. In 2020, the British need to sit on their arses for a few weeks. Come on chaps, we can do this.” I don’t know if Alan Ayckbourn ever saw this, but it’s as good an inspiration as any for laying the two worlds side by side – literally.

Sometimes, a play makes its first impression before it’s even started, simply by looking at the set. In this case, it’s two kitchens and gardens side by side: one is obviously present day, with modern decor and immaculate lawn; next door is a full-blown “dig for victory” garden and a kitchen that could have walked right out of Beamish. Present-day is the most 2020 setting you can have, with actor Rob (like everyone in profession at this point, and out-of-work actor) crashing whilst his high-flying sister Alex is quickly adjusting to working from home. So is next door run by some 1940s enthusiasts or something? That possibility is ruled out when they comment that next door is normally as immaculate as theirs. The “girl next door” is a young wife living in the real 1942 and an ill-fated husband serving in North Africa.

The one thing this play captures well as the wartime spirit. Not the absurdly romanticised version used in referendums in the 21st century bur the more real understated one. Lily has lived through far worse horrors than a lockdown. She hasn’t seen her evacuated children for months, and her parents were killed in the blitz and she could be next at any moment – but she, just like everyone else, just gets on with it. There is an also an element of feeling safe in the blitz. For a while Rob gets away with the role of a fireman (seemingly basing his knowledge of firefighting and everything else on TV shows he was one in), but when he’s finally forced to come clean and show Lily his futuristic home, it quickly becomes clear she’d be rather in danger in the world she knows than safe in the world she doesn’t.

There’s also in interesting exploration of gender politics at the time. The 1940s, of course, wasn’t exactly renowed for gender equality, or any other kind of equality – but like the constant danger of the war, it’s something Lily just accepts as normal. Her husband, it emerges, embodies a lot of the wrong ideas from 1940s, and in another play would be made out to be the villain. This one, however, puts it in perspective – when Alf finally does open up he reveals his own vulnerability: his constant fear of not being alive next week, what may happen to his family when they’re away. None of his unsavoury attitudes are condoned, but it’s a reasoned hearing of a man who’s a product of his time.

In keeping with the unusual times of both years of the play, this play had two casts. I’d seen a lot of companies make use of this precaution, meaning that even one actor tested positive and forced the rest of the cast to self isolate, there’s an entire spare company to call on. It’s fair to say I got the “B” company, but the only reason I saw that is that I recognised a couple of names from the “A” company list (Bill Champion and Alexandra Mathie) and I’m pretty sure Ayckbourn wrote the parts with them in mind. Other than that, I’d have never guessed, because it looks like this lot put on just as good a performance as the other team. It turns out that the nightmare scenario they’d got to such lengths to avoid never happened, but it was still a wise precaution take take because- … well, we’ll be coming on to this in a moment.

One weakness I’ve seen of a lot of Ayckbourn plays lately is a promising set-up in act 1 that doesn’t quite deliver in act 2, but Girl Next Door avoid this pitfall. It may be that this premise for this was relatively simple compared to most of Ayckbourn’s recent plays, but if he was playing it safe it paid off. It is always a challenge for Ayckbourn to produce something as memorable as his extensive catalogue of ground-breakers, but this was still a delightful gentle play to watch, and a perfect relaunch for the Stephen Joseph Theatre. 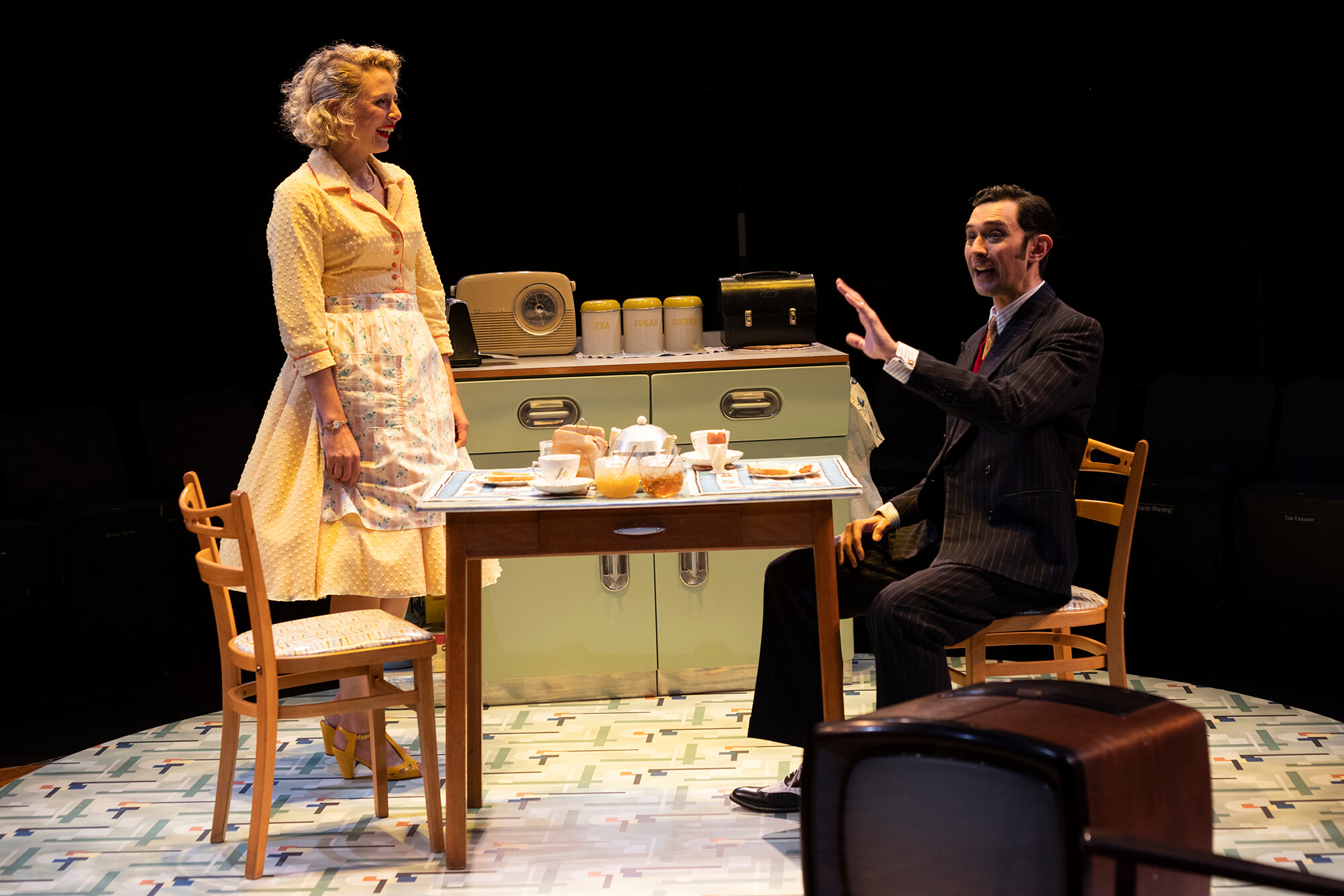 When I described the plot of the SJT’s other summer play, I realise this had a lot of similarities to Ayckbourn’s plots. However, this comes from a completely different source: it’s one of Laura Wade’s best-know plays, and it’s done as a co-production with several other plays. It was directed by Liz Stevenson, so Paul Robinson fans had to wait a bit longer. With vaccination well underway by this point and a doubled-up cast being costly, and the extra cost of a six-hander instead of a four-hander, it was decided not to repeat the precaution used for Girl Next Door. And sod’s law struck and someone got Covid and the play got cancelled for a week and a half. Ah well, the SJT’s had a lot of good fortune on its side over the last year, I suppose their luck would run out eventually.

Anyway, if Girl Next Door is the case for the defence of old-fashioned attitudes, Home, I’m Darling is the case for the prosecution, albeit another nuanced one. The set shouts out “I AM FROM THE 1950s!” – in retrospect, a little too 1950s for the real thing. Then a 1950s couple come down for breakfast, with Jude making breakfast for her husband Johnny before he goes to work, shoehorning every 1950s cliche possible. Until he leaves and she gets out her laptop. Yes, there were no nostalgia enthusiasts last time but these two like living in the 1950s, and an absurdly exaggerated one at that.

But – hang on a second – something isn’t right here. It’s only when friends and family pop over that we learn that Jude used to work herself, and actually earned more than her husband. In fact, she used to be a feminist firebrand. Uh-oh, this is a red flag. Looks like she’s got herself a controlling husband who’s using old-fashioned stereotypes to assert his authority. But wait, that doesn’t make sense either. It turns out Johnny is a lot less comfortable than his arrangement than she is. Also, living in the fake 1950s doesn’t come cheap, especially when you weren’t the main breadwinner before. It’s only after things come to a head we learn how the situation came to be. I won’t spoil that – suffice to say, for anyone who’s been in that situation, you can understand why Jude’s life choice felt like a good idea.

There are a lot of other threads to this play though. So catchy is this absurd fictitious version of the 1950s that their friends are thinking of also going the whole hog, but this is a lot more like the scenario I originally envisaged, with him pressuring her to quit a job she’s perfectly happy with. Jude’s present-day job combined with his 1950s home life is creating a lot of unwanted complications. And we haven’t yet discussed the less wholesome aspects of that decade, like some men thinking they can behave like sex pests if they want to. As it happens, you don’t need to live in the 1950s to behave that way, but that will come to light later. The only thing I would say is that these things between them serve the tagline of “Nostaligia ain’t what it used to be” – so you don’t need to spell it out any further. When Jude’s mother finally gives a detailed checklist of everything wrong with the 1950s – there’s nothing I’d disagree with, but surely Jude would just say “Okay, mother, I get the point” half-way through.

There is one small but irritating detail with the production. The set is visually striking, making the same statement that Girl Next Door made with its set, but it seems to arbitrarily switch between an open-plan ground floor and a separate living room and kitchen. Sometimes, a conversation takes place in one room out of sight of people in the other room, but at other times, they talk across the two rooms as if it’s the same thing, and it gets particularly confusing when people walk through spaces previously established to be walls. But I’ve little else to fault with the vision. What could easily have been a ham-fisted tale is made into a balance of conflicted characters and thoughtful commentary. Any kind of relaunch in the summer of 2021is an achievement, but the Stephen Joseph Theatre didn’t need to rely of public goodwill and makes an good start back.