Ho hum, my last online theatre roundup was supposed to be my only article about online theatre. I was intending to get back to proper theatre by now. But with the lurgi refusing to make an exist without being as big of a pain in the arse as possible on its exit, I’m still on this.

A small list this time, and I’ve already caught up with most of the things I wanted to catch up on, but I have four things for you before we get back to normal service.

This one, I confess, should have been reviewed last time round, but I forgot. Better late than never, I hope.

Two years ago, Conrad Nelson and Deborah McAndrew pulled one of theatre’s bigger surprises.* They had risen through the ranks of Northern Broadsides to produce their own plays in their own style to huge acclaim, and when long-standing Artistic Director Barrie Rutter left, Conrad Nelson became his interim replacement. I assumed he had the permanent post in the bag, but not only did he step down, he and his wife decided it was time for a change and left the company completely. Instead, they decided to put all their energy into what started off as their side-project: Claybody Theatre. Unlike the Broadsiders, this was a very local company producing plays of interest to Stoke-on-Trent. As a result, they have very much dropped out of the national spotlight. But not my spotlight, because I happen to have a sister who lives there.

*: At least surprising by pre-2020 standards of surprise.

With one of their first Claybody plays, Dirty Laundry, now made available as an audio play, I took the chance to see what they were up to. And if you’re a fan of their Broadsides work, the first thing than strikes you is what a different direction they’re going in; the second thing that may strike you is how much more specialist the appeal is. The target audience here is Stokies through and through, and more specifically, Stokies who know about the Six Towns’ long history with pottery. I’ve only recently learnt about it myself – and it’s fair to say that if you know nothing about Stoke or Pottery this story may not grab your attention – but I have learnt enough to appreciate how well McAndrew has done her homework here.

END_OF_DOCUMENT_TOKEN_TO_BE_REPLACED

Before we get to business, one announcement: Chris Neville-Smith’s 2020 awards is not cancelled. There hasn’t been a lot of theatre this year, but there has been enough for a meaningful contest. Since the competition is going to be thin on the ground next year and a best of 2020 won’t mean that much, this time next year I plan to do a set covering both 2020 and 2021, where a win be treated as a normal year. I have one review from this year pending – one thousand bonus points if you can guess what it is. (And before you attempt any Sherlock-style elimination of the impossible, my movements aren’t necessarily what you think.)

But before we wind up, it’s time for a catch-up of all the online theatre I saw. I am very much a live theatre person, with my interest in online theatre mainly limited to finding out about plays I couldn’t see in person. As such, my following only really went as far as July, after which I could switch back to live performances. I haven’t gone into the same depth as normal reviews either, so instead of my usual roundup of almost everything, I’m limiting coverage to the ones that I found notable in some way. So there are many online plays I saw which aren’t on this least and it doesn’t mean I hated it. But out of the ones I saw, here’s what got my interest …

I’ve previously reviewed and enjoyed Blackeyed Theatre’s adaptation of Jane Eyre, but this came hot on the heels of another much higher profile production. One of the earliest plays streamed by National Theatre At Home was their 2017 main-stage adaptation of the same story. The one thing you can indisputably say in favour of this version is that it is far more adventurous. Whilst Blackeyed and many other productions remain in the comfort zone and stay faithful to the original, Sally Cookson’s is billed as a “bold and dynamic production”, and in this case the boldness extents to an abstract set, original music, adventurous staging and choreography and much more. 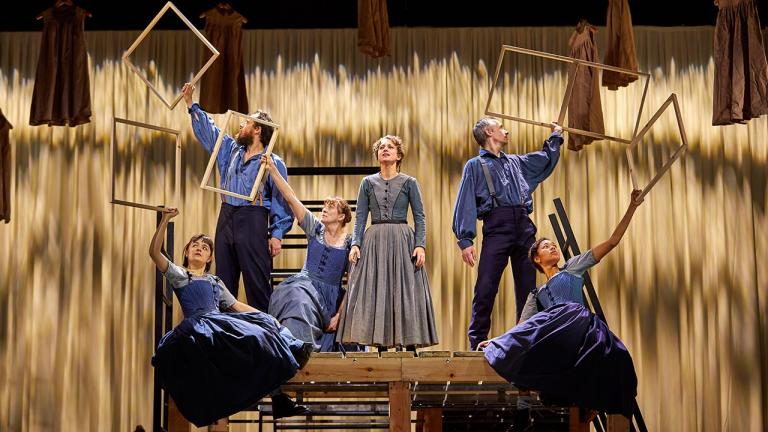 If there’s one weakness this play has, it’s what I call “concept overload”: the play’s biggest strength is also its biggest weakness. All of these concepts worked individually, but bundled together it got confusing. At the same time I was putting a scene to threadbare set, listening to music that jumped in and out of the period of the story, heard Jane Eyre talking to a chorus of five expressing her inner thoughts, listening to a lead vocalist who I think was representing the first Mrs. Rochester but I’m not certain, and many other abstract concepts thrown in. This, I suspect, ended up coming at the expense of characterisation. Jane and Mr. Rochester were captured quite well, but it seemed to me there was a tendency to portray all antagonists as cold and heartless. This is generally not the case: in Blackeyed’s production, you end up feeling sorry for Jane’s cruel aunt after she is betrayed by her own children, whilst St. John’s misguided infatuation with Jane is portrayed as naive rather than controlling – both of these touches I felt was lost here.