Northern Stage and Birmingham Rep’s adaptation of A Thousand Splendid Suns stays faithful to the book, but brings a new focus to the treatment of women in Afghanistan – which began earlier than you might think.

Talk to anyone about the history of Afghanistan and they’ll tell you the Taleban took over after the US armed them during the Soviet invasion. There again, talk to anyone about any topical bit of history and they’ll probably tell you whichever cherry-picked version suits whatever point they want to make. Never trust what most people tell you. As often is the case, this version is not wrong, but it’s a very simplistic version that misses out most of the intervening steps. It is this that Khaled Hosseini’s books cover well. In The Kite Runner, the main character flees Afganhistan with his father as things are starting to go downhill and only returns when Taleban rule is at its worst. In A Thousand Splendid Suns, Laila doesn’t get the chance to escape, and witnesses the descent of her country into a theocracy. But it’s a slower descent than you might think, and not just down to Osama Bin Laden’s mates.

At the beginning of the play, Laila lives with her liberal-minded parents in Kabul. Even though her brothers fought and died for the US-backed Muhadajeen, the family is still supportive of the Americans, with her father even wearing an American T-shirt. Unfortunately, Kabul is under attack, and before her family can flee, a shell hits the house and both her parents are killed. Laila only survives because of some neighbours who take her in, but what first appears to be an act of kindness soon turns out to be an act of opportunism and the start of the nightmare. Rasheed is a self-obsessed control-freak who dominates his wife, and now wishes to take Laila as his second – something she is powerless to refuse. Mariam is at first angry with Laila for being upstaged, but as Rasheed’s true colours come to light and Laila sticks up for Mariam, the two form a hasty alliance, soon to become a true friendship. END_OF_DOCUMENT_TOKEN_TO_BE_REPLACED 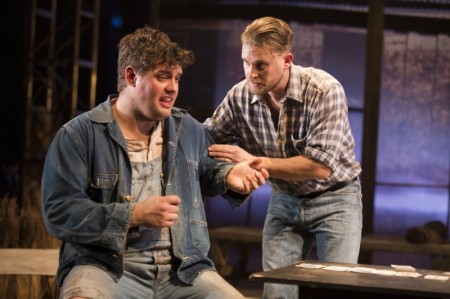 John Steinbeck’s classic Of Mice and Men is just as moving now as it was in the Great Depression; and the production from Birmingham Rep and Touring Consortium fully does it justice.

Credit crunch? Austerity? Pah! All pales into insignificance against the Great Depression of the 1930s, bringing poverty to the United State unimaginable today. But whilst the hardships may be long forgotten, John Steinbeck’s masterpiece from this era lives on. Of Mice and Men is set in the world of the migrants, the American men who travelled west looking for any work they could find. A big theme throughout the play is loneliness of the migrants who travel alone. But two main characters in the story, George and Lennie, travel together and have each other.

The friendship of George and Lennie is fundamental to the story. Lennie is strong but simple-minded, and frequently gets them both into trouble; George would do better without him, but he accepts this burden – perhaps it is because he knows Lennie would never betray him. One might think of Lennie as gentle giant who wouldn’t hurt a fly, but sadly, that isn’t quite true. Lennie likes to hold tightly on to things he likes, which is how many unfortunate mice met an untimely end. We hear of a misunderstanding regarding a lady’s dress Lennie took a liking to that almost spelt the end of both of them. Alas, in spite for George’s efforts to protect Lennie from himself, this trait of his will bring their friendship to the ultimate tragedy. END_OF_DOCUMENT_TOKEN_TO_BE_REPLACED