Hey, Alan, aren’t you supposed to be having a rest? He stepped down over six years ago, but perhaps to cover a Chris Monks-shaped hole in the Stephen Joseph Theatre’s programme, he’s directing three plays – four if count the lunchtime shows as two. And he’s doing the Christmas production too. He was never normally this busy when he was Artistic Director. I suppose his final season as Artistic Director back in 2008 might have been a little busier depending on how you count things, but really, what happened to this retirement of his?

The good news, of course, is that Ayckbourn-heavy seasons in Scarborough rarely disappoint, and this is no exception. So let’s get stuck in.

Ayckbourn trivia 1: Alan Ayckbourn wrote and directed Henceforward … during his two-year sabbatical at the National Theatre. Yes, even when he was wowing crowds at the National with A Small Family Business and other plays, he still found time to produce at Scarborough. Ayckbourn trivia 2: Henceforward … was a return to a genre he’d not visited ever since a very early (and now abandoned) play Standing Room Only, that being science fiction, with a heavy emphasis on a dystopian future, breaking a twenty-five run of plays dominated by middle-class suburbia. He’s done other decent science fiction plays since, but this remains his most acclaimed, and this year it returned to Scarborough just shy of its 30th anniversary.

The problem with remakes and revivals of stories set in the near future is that the near future has an irritating habit of coming along and being nothing like what you wrote. (For example, we are already one year past Back to the Future 2 day and I’m still waiting for my flying car, hoverboard and double-ties, and I’m going tweet this review like the Luddite I am rather than fax it.) Ayckbourn, however, manages to avoid plays like this becoming dates because Henceforward … has not much that to do with futuristic technology and a lot more to do with a society that is falling apart. Jerome lives in a flat in an area of North London designated a “no go” area, where the streets are ruled by “The Daughters of Darkness”, an all-female gang, not that you’d know it from looking at them. That dystopia has always been a possibility a decade or two away. The music technology Jerome (Bill Champion) has in his flat looks more like the technology of today and less like the clunky apparatus of the 1980s, but the script pretty much gets away with staying the same. In fact, the only fictitious piece of technology present is NAN-300F, a nanny robot who treats everyone as a child unless Jerome instructs otherwise.

The strength of this play, however – as is always the case with Ayckbourn – is the characterisation. Jerome is a composer whose creative obsession, we slowly learn, drives him to self-destructiveness. He is estranged from his daughter who he last saw when she was nine, apparently kept away by a vengeful ex-wife. A very important role, superbly played by Laura Matthews, is Zoë, a first-time escort girl, wanted by Jerome not for her body, but for a role in this plan to get his daughter back. Zoë, too, has her own troubled story, behind her ditzy vapid exterior. Desperately clinging to an clearly-doomed dream of being an actress, living in an equally crime-ridden area of London (the non no-go areas are evidently little better than the hellhole where Jerome lives), and forced to take sanctuary from the Daughters outside, the two of them find they have a mutual attraction. But Jerome’s habit of taking the most intimate moments of other people into his work (something Alan Ayckbourn admits to having done all the time in his play), will put paid to that.

A mostly dark first half is followed by a mostly comical second half, where a meeting with his wife Corinna is lightened by the infuriatingly wet social worker Mervyn, who has a gift of waffling on to avoid any confrontation and end up saying absolutely nothing. Also joining them is NAN-300F, now remodelled on Zoë (and still performed excellently by Laura Matthews). Whilst that was also funny, I felt the joke was over-stretched beyond the point of plausibility – I can believe a robot giving an inept performance of Jerome’s fake fiancée, but I just couldn’t believe that Corinna or Mervyn or anyone else would be able to watch something for that long and not suspect anything. That, however, is the only weakness in the play, and the main thrust is that Jerome’s story of his vengeful ex-wife isn’t the whole story – some bits he left out, but mostly it’s intervening events in the last four years he’s not up to speed with.

As so often is the case with Ayckbourn classics, it’s an enduring success because of its multi-layered plot, setting and characterisation he does so well. It does not disappoint and this easily earns its striped as the highlight of the summer season. 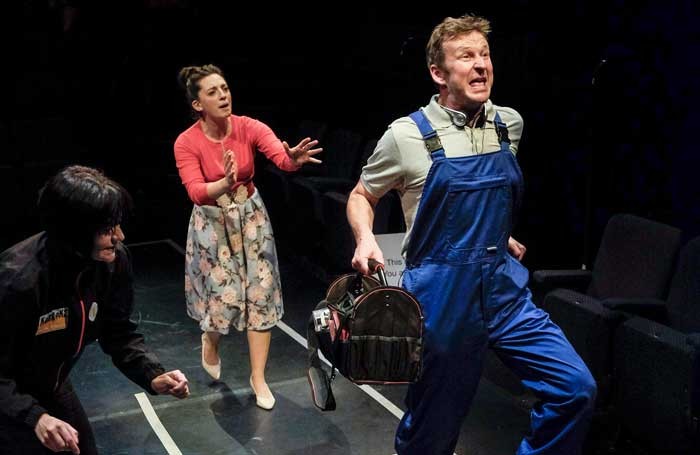 The other Ayckbourns in the season, all new, have a distinct Edinburgh fringe feel to them even though they’ve so far been nowhere near. The Karaoke Theatre Company, however, is one of the most different things he’s done from his normal repertoire. This play is one that’s best seen cold – that is, watch it with no idea what to expect. However, as it’s come and gone, then – unless you’re holding out for the next revival – you can safely read on.

“But what on earth is a karaoke theatre company” I hear you violently scream into your monitor? Well, it can mean several things. It could be that it’s named after the initials of the company members, including Karen, Alyssia, Rufus, Anna and Oliver (quite a staggering coincidence that this cast have all the right letters to make up this word, although none of them seem to show up in Equity members lists; mind you, by another staggering coincidence five completely different actors with different names and everything are in the other two Ayckbourn plays and look completely identical – how uncanny is that?). Or it could named after that tradition that involving grabbing the microphone and belting out I Will Survive, expect it’s not Karaoke singing but Karaoke Theatre. What could that entail?

Yes, if you harbour a life-long ambition to play a part in a Stephen Joseph Theatre play, now is your chance. Warming up with Karaoke Theatre tennis, where selected audience members provide the sound effects for the invisible ball being thrashed around Centre Court, we then go into a series of farces, period dramas, gothic horrors and dubbed Swedish crime dramas, where lucky audience members get to provide a multitude of lines, sound effect, narration, and, in my case, the part of the butler announcing everyone’s arrival. Lucky. I have a lot of practice announcing dinner is served. The highlight, however, is one audience member who gets to watch the period drama and then choose a part to play in the replay, and we were treated to none other than US Stage Columnist Howard Sherman, who opted straight for the heroine and gave a wonderful performance. Such a tragedy it will never be repeated.

With the improvisatory nature of show, much of the credit must go to the cast who worked a s great team coping with one unexpected event after another from an unpredictable audience. It’s fair to say this is a fun piece rather than anything of real substance. If you’re a SJT regular, this will be a refreshing change with something different – if you’re an Edinburgh Fringe regular, however, this won’t feel terribly original, and won’t stand out that much from all the other semi-improvised interactive shows. Nevertheless, if you take it for what it, you’ll get an enjoyable evening out of it. 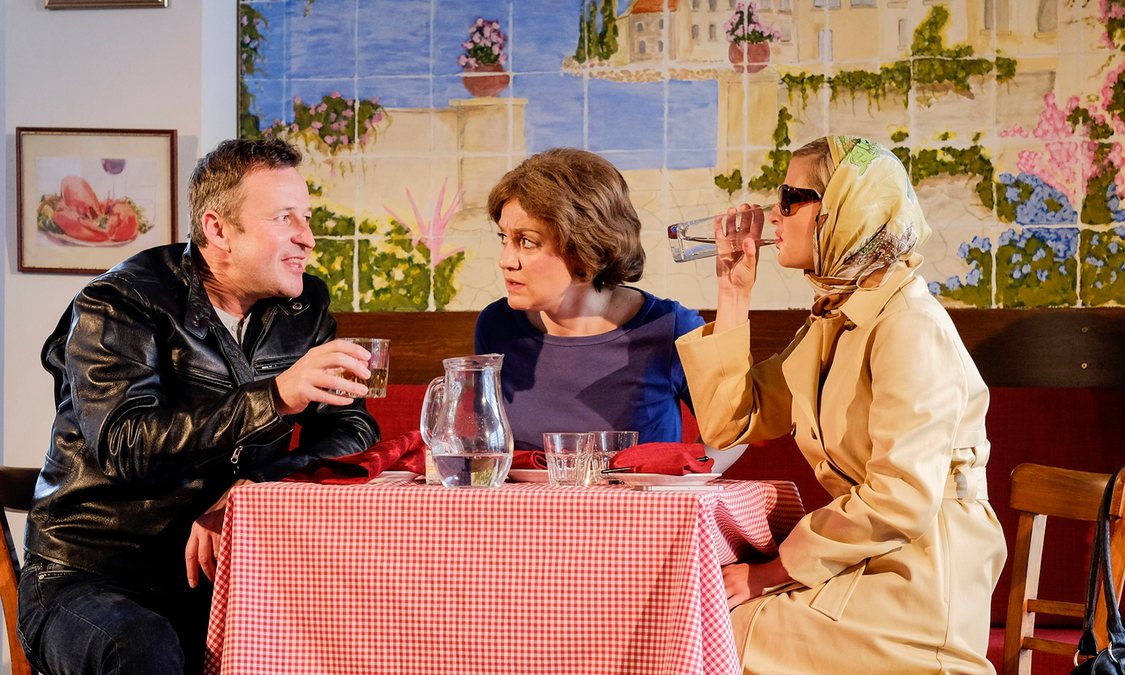 This one, however, was the hidden gem of the season. The last time Ayckbourn did a pair of interlinked plays for the lunch-time shows, it was Farcicals, a pair of farces. I know most Ayckbourn plays are wrongly described as farces, but these two really were in the territory of trousers falling down as the vicar walked it. As such, I was preparing myself for another undemanding fun piece but not much more. But I was wrong. This mini-thriller couldn’t be more different. Consuming Passions continues the skill Ayckbourn demonstrated so brilliantly in Roundelay where multiple plays sharing characters and themes could be seen in any order, and your experience varied depending on how the plot developed.

Divided into Premonitions and Reprecussions, it all revolves around Melanie, ex-employee of the wealthy Cedric, overhearing wife Cora plotting his murder with weak-willed lover Freddy. Except she’s hearing today a discussion that does not take place until tomorrow. Somehow, she must warn Cedric of the plot before it’s too late. One problem: Melanie has a track record of delusions, most of them ridiculous, or comforts for her lonely life, or both. It’s pretty obvious, for instance, that she doesn’t have a son at Oxford whose girlfriend is a middle-distance runner, however many people she tells that to. And given her poorly-disguised torch she hold for Cedric and her long-standing hatred for that gold-digging slut of a wife, overhearing this kind of plot does sound a little like wishful thinking on her part.

It’s a finely balanced play, with the plot teetering between one possibility the conspiracy is real and another that it’s just her delusions. Even the climax leaves it unclear which one it is, and only the most subtle of clues in the story give any indication of which one it is. But the greatest achievement of the plays is that you can see them in or out of chronological order, and it’s just as good either way. Ayckbourn drops tiny plot points into each act as the story progresses, as if it’s a jigsaw puzzle slowly coming together to reveal the answer to the mystery.

Consuming Passions stands to go down as a footnote of the SJT’s 2016 programme, or a useful filler in a season devoid of an artistic director. I hope it doesn’t, because it deserves a lot more than this. The lowest-key play of the whole summer season is, I think, one of Ayckbourn’s best 21st-century works. So, SJT, look back on Henceforward and Karaoke Theatre with pride, but don’t overlook Consuming Passions. This deserves its place too.