So, starting with Alphabetti Theatre, this play took the highly prestigious slot of the opening piece for the brand-new venue. With this standing to set expectations for a lot of Alphabetti first-timers, a lot of responsibility was entrusted to co-producers Coracle Arts. But it was a good bet to take, because Arabella Arnott’s play had a very promising opening at the Gala’s scratch night, due in part to Rosie Stancliffe in the lead role of Beth. She has shone in every role I’ve seen her in, and even if the play itself doesn’t work out, she’s always added to it. END_OF_DOCUMENT_TOKEN_TO_BE_REPLACED

Northern Stage have just completed their Queens of the North season, with the headline act being two plays with prominent female leads. As well as this, there were other plays and events that are, to use Northern Stage’s words “Stories by women, about women, about humankind through the eyes of women”. However, out of all of the events I saw, by far the strongest one was neither Dr. Frankenstein nor Hedda Gabbler, but a lower-key production over in Stage 2. So let’s begin with this.

Paddy Campbell’s new play, it must be said, had a pretty tenuous link to the Queens of the North season it was officially part of. A play that explores young people leaving foster care through their own words, both male and female, the only vague claim this has to be about humankind through the eyes of women is that the artistic director of the performing company Curious Monkey happens to be female. This play would surely have been programme with or without a Queens of the North season to put it in – it would have been crazy not to, given the following both Curious Monkey and Paddy Campbell already had.

But, hey, whatever, that’s just marketing. What I’m really interested is the play. I knew little of Curious Monkey’s previous work, but this was playing to Paddy Campell’s greatest strength on writing very fairly and knowledgeably about the social care system. The only question was whether a verbatim play could live up to his previous more conventional scripted plays. Well, what do you know? It has; in fact, it’s surpassed those expectations handsomely. END_OF_DOCUMENT_TOKEN_TO_BE_REPLACED 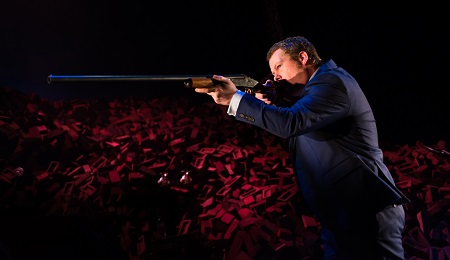 Dark, well produced and well paced, and yet the most striking thing about Northern Stage’s Get Carter is not what is in Torben Betts’s adaptation, but what isn’t.

Would Northern Stage do justice to the legendary Get Carter? I was prepared to stake my reputation on this when I made this my top recommendation of the season. Northern Stage have a long track record of decent and innovative productions, and Torben Betts has a great track record as a writer. And yet, I had a few nagging doubts. When I saw their offerings last year, both Torben Betts and Northern Stage artistic director Lorne Campbell made some odd artistic decisions that stopped them living up to their full potential. And I was still reeling from a very disappointing (and utterly incomprehensible) version ten years ago. Well, I needn’t have worried. Get Carter is an excellent choice to put on stage if you get it right, and they did.

Get Carter is, of course, best known for the film with Michael Caine, who has the amazing ability to play any character in any film as the Michael Caine character and pull it off. He could probably have got away with saying “My name is Jack Carter. Not a lot of people know this, by my niece Doreen is actually my daughter.” Such is his dominance of any film he touches, it’s easy to forget it was already a great story without him. Set in the criminal world on 1960s Newcastle, Jack returns home for his brother’s funeral. Already a veteran of London’s criminal underworld, Jack correctly guesses his brother’s death wasn’t really an accident and people are feigning ignorance. What he doesn’t realise straight away is that he’s getting drawn into a power struggle in a web of criminal empires, each one trying to play Jack off against their rivals. Jack might have been an amoral hand for hire in London, but on learning what really happened to his family, he becomes a vengeful vigilante, dishing out somewhat arbitrary justice, with your fate largely down to how much you’ve pissed him off. END_OF_DOCUMENT_TOKEN_TO_BE_REPLACED

Lorne Campbell’s decision to stage Cyrano de Bergerac in a gymnasium is very strange indeed. But in spite of this, it’s still a production worth seeing.

Right, here’s a fact I bet you don’t know. Anthony Burgess – yes, that’s the same Anthony Burgess of Clockwork Orange fame – was also a skilled literary translator, and amongst his translations is Edmond Rostand’s 19th century classic, Cyrano de Bergerac. Set in swashbuckling France at the height of the Three Musketeers era, Cyrano de Bergerac is an legendary duellist and respected commander of the French Army, let down only by his ugly long nose (and woe betide anyone unwise enough to poke fun at it too much). His less-known weakness, however, is his love for Roxanne, disguised so well even Roxanne believes him to be only a friend. But Roxanne loves handsome Christian, a new recruit to Cyrano’s company, and he agrees to act as a go-between. But Christian, shy and lost for words, relies on Cyrano to write his love letters for him. Wait a second, I think I’ve seen this story before. And from what I recall, it never ends well.