Pilot Theatre’s latest adaptation, with a subject suddenly thrown in to national attention, is strong all rounder carried in particular by their ever-innovative staging and one of the best individual performances I’ve seen.

One thing virtually every theatre company aspires to be is “current”, “urgent”, or one of the many other synonyms for topical. But, for all the lofty aspirations, this is surprisingly difficult to achieve. Most main stage productions are at least a year in planning. The issue that prompted you to commission a play is probably going to be long-since forgotten by the time it makes it to an audience. And in the event it is still being talked about, you are probably going to find yourself jostling for attention with another ten groups all saying the same thing as you. Nine times out of ten, you’re better off forgetting about trying to tap into trends and just do something that stands up in its own right. Unless, of course, you end up topical by accident, as happened here. When Pilot Theatre announced The Bone Sparrow (another back adaptation, this time with the original from Zena Fraillon and adapted by S.Shakthidharan), the topic of refugees was an ongoing issue but there was no particular thing bringing the matter to the fore. Now, however … well, I don’t need to tell you what changed.

The setting of The Bone Sparrow is quite far from home though. Priti Patel hasn’t exactly endeared herself to a suddenly refugee-sympathetic public, but few things are more notorious than the immigrant detention camps in Australia. Supporters of these camps will probably argue that Australia cannot be expected to single-handedly house half the world’s refugees, but a less charitable interpretation, as explored in this play, is that it’s a game of buck-passing. By trying to make your conditions for immigrants more infamous than the rest of Asia and Oceania, refugees will opt to go somewhere else instead, were it not for the fact that all other would-be safe countries are doing the same, and you get a race to the bottom. But this is not a comment piece on the merits of immigration policies, this is the place for a theatre review.

END_OF_DOCUMENT_TOKEN_TO_BE_REPLACED

Pilot Theatre’s latest adaptation of a young adult book is has a narrower appeal than their usual productions, but it deserves to finish the job with the audience this play is aimed at.

The final play on my pre-lurgi catch-up list is a Pilot Theatre production. Pilot Theatre have earned my respect over successive productions for many reasons, but the biggest stand-out is the staging. It varies from play to play, but whatever they do always impresses in a way they’ve never impressed before. The subject material varies as well; last year’s Noughts and Crosses was packaged as an ordinary story of forbidden love but was in fact set an alternate world where Jim Crow laws exist in reverse. Crongton Knights, it turns out, is almost the opposite, packaged as a story of adventure and friendship akin to The Magnificent Seven (with the friends here self-styled as “The Magnificent Six”), but with the setting being a gritty housing estate in South London.

Adapted from the second of Alex Wheatle’s young adult books, five young friends embark on a mission to confront the ex-boyfriend of one of the gang to demand the return of some compromising photos. In an unfortunate twist of timing, this is the day the London riots are destined to break out, but this doesn’t actually feature much in the story. This is because although they live in the notoriously rough South Crong, they must journey to Notre Dame estate,and a typical night there makes the London Riots look like a picnic in the park. Can they make it with nothing but friendship and loyalty on their side.

Crongton Knights is a heavily character-driven story. One of the strongest themes is Bushkid. You see, this is the origin story of the Magnificent Six. Whilst the rest of the gang come from families struggling on the breadline, she lives comfortably with wealthy parents – but what she want more than anything is to fit in with friends. One character I would liked to have known more about was Saira. She is a Syrian refugee whose father is still missing, and one suspects she’s witnessed far worse horrors than anything a sink estate can muster. It would have been interesting to see how she’d react in a situation she’s desensitised to, but that doesn’t really feature in this story. Maybe the next book.

END_OF_DOCUMENT_TOKEN_TO_BE_REPLACED

Skip to: Jurassic Park, Of Mice and Men, The Bookbinder, Dancing in the Dark, The Jungle Book, Le Bossu, Consuming Passions, The Season Ticket, Frankenstein, How Did We Get To This Point?

And so, we come up to the final year of the list for now. When first set off doing this, I had planned to do these articles all the way to the present day, but I found as I went along it was more fun doing this as a retrospective, in particular wondering what these artists who impressed me are doing now. So I’m going to stop here for now and continue in real time. The Ike Award Hall of Fame 2017 will be done next year, 2018 the year after, so that there will always be a 3-4 period to reflect and see what happens next.

But before that, the outstanding plays of 2016, and this is a long list. It was probably chance more than anything, but amongst the plays I saw in 2016, the standard was exceptional. As a result, there are ten of you who’ve kept me busy writing this up:

What is the best thing you can hope to get from the Edinburgh Fringe. Some might say a Fringe First, some might say wall-to-wall five-star reviews, but there is surely no greater honour than everybody at the fringe saying how great you were. At the 2015 fringe, I lost count of the number of times people saying how good Jurassic Park was. So I took the opportunity to work this into my visit I checked it out for myself (now called Dinosaur Park), and found out it is indeed as good as everyone said, and more.

END_OF_DOCUMENT_TOKEN_TO_BE_REPLACED

Sabrina Mahfouz’s adaptation of Malorie Blackman’s young adult novel is an intricate yet accessible depiction of a racially divided world that might have been.

I don’t normally start a review with a spoiler warning, but if you’ve already decided to see this play and you don’t know about the Noughts and Crosses series, I advise you to stop reading now. Pilot Theatre advertised this play as tale of forbidden love in a world of racial tension, but they deliberately omitted one important bit of information about what sort of world this is. The revelation comes in the opening scene – it won’t spoil the scene, let alone the rest of the play, if you know what it is, but it’s better if you don’t.

However, a review of Noughts and Crosses that doesn’t tell you what the Noughts and Crosses are is like a review of The Matrix that doesn’t tell you what the Matrix is. I would not be possible to talk about the many merits of both the story and the adaptation without telling you what Pilot Theatre isn’t telling you; so, in the style of the news just before match of the day, if you want to find out in the play, look away now. END_OF_DOCUMENT_TOKEN_TO_BE_REPLACED 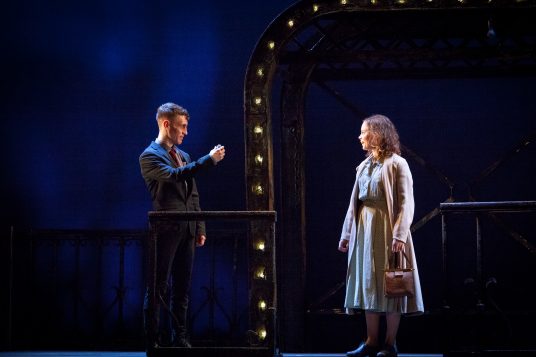 The one thing that sticks in my mind about Pilot Theatre more than anything is their striking sets. Directors and writers change, but the projections and running treadmill in The Loneliness of the Long-Distance Runner and the concrete flats in The Season Ticket have always stuck in my mind. So I was expecting something striking for Brighton Rock, but the choice, in retrospect, was the obvious one: Brighton Pier – or, more accurately the West Pier, back in the days when it was still a pier. The girder-themed West Pier is the better choice here, because, as Pilot Theatre plays always do, this set will be representing a lot of different locations around gang-ridden 1930s Brighton.

An early example of the set put to use is the chase. Fred, having fallen out of favour with his own gang, keeps moving, trying to stay where people are watching, and even attempts an impromptu courting of Ida. Alas, Ida is too slow to twig what’s really happening, and the minute she spends away from Fred to powder her nose is the minute his gang move in for the kill. With young Pinkie installing himself as the new leader, he then covers his tracks, but a careless mistake make by Spicer leaves a witness, a waitress called Rose. Pinkie opts to court her, and if necessary, marry her so she legally cannot testify against him.* By now, however, Pinkie is up against Ida, determined to make it up to Fred, and determined to protect innocent Rose. But does anyone know what Rose really wants? END_OF_DOCUMENT_TOKEN_TO_BE_REPLACED 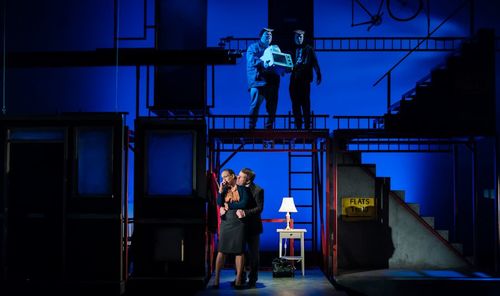 Sometimes touching, sometimes brutal, The Season Ticket is a great four-way collaboration portraying lives on the fringe of society.

Could you assemble a better team? Lee Mattinson has already shown how skilled his writing is with Donna Disco and Chalet Lines.  Pilot Theatre wowed us with one of the best staged plays ever with The Loneliness of the Long-Distance Runner. Northern Stage, of course, as an excellent track record of mainstream productions. And Purely Belter, the film adaptation already made of the book this is based on, is a cult classic in Newcastle. And yet seemingly surefire collaborations don’t always work out. Such high expectation can set up such bitter disappointments. But not here. The Season Ticket is every bit as good as I hoped it would be, and more.

Gary and Sewell are two young lads at the very bottom of the pile. Gary has a sister who is desperate to get her A-levels so that – it is quietly understated – she can get out and move on to a better life – Gary has given up on going to school, and best friend Sewell has seemingly given up in general ever since his father died. The two of them begin in the middle of an inept petty crime, looking for suitable luxury household appliances to burgle from their headmaster’s house. Perhaps, it’s suggested early on, it’s got something to do with Gary having a half-inattentive alcoholic mother. But it emerges that she, too, has her own reasons to give up, once it emerges what sort of person Gary’s father was and what he did to them. END_OF_DOCUMENT_TOKEN_TO_BE_REPLACED

Pilot Theatre’s adaptation of Alan Stillitoe’s 1959 classic is a fine example of both writing and directing, but the biggest achievement of all is the stunning technical presentation.

Roy Williams transplants this story from its original setting of a 1950s borstal to the present day. There is one overriding observation: you wouldn’t guess you were watching an adaptation if you didn’t know. It makes it look like the contemporary post-riot setting was how the story was written all along. But whilst many so-called adaptations butcher the originals, in this script the key events are the same. Colin Smith (Elliot Barnes-Worrell) is a young petty criminal doing time, discovered to be an extraordinary runner. The story takes place over the course of the run, flashing back to his time behind bars and the events that led him behind bars: his only caring relative, his father, dead from a terminal illness; a mother splashing out this insurance money on a new fancy man; choosing boring unemployment over boring menial jobs; and eventually arrest following a stupid attempt to rob a bakery. If he wins the race, the Governor will look good, and Colin will be set up for a glittering sports career when he gets out. Everybody wins, huh?