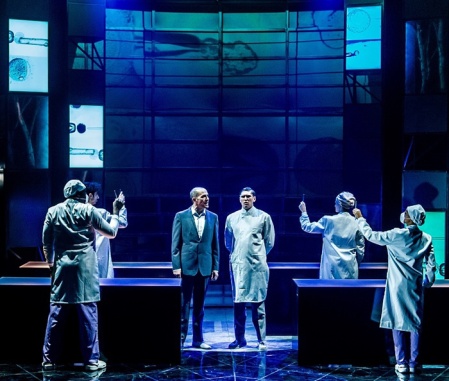 Brave New World is one of of many famous stories of dystopian futures. But whilst books such as Nineteen Eighty-Four and Animal Farm had worlds that relied on crushing despotism, this was more passive and cunning method of subjugation, relying heavily on distractions and the suppression of any real emotion. Thank goodness it’s only a story, because the sinister means used include conditioning humankind to engage in meaningless casual sex, a terrifying prospect that strikes fear into the hearts of all- … okay, bad example. All right, they also subjugate humankind by banning texts that might induce too much emotion, so Shakespeare’s out the window – nope, still not getting the point across, am I? No Shakespeare, but everyone gets laid. Look, just take my word for it, it’s dystopian. END_OF_DOCUMENT_TOKEN_TO_BE_REPLACED

James Dacre’s take on Cat on a Hot Tin Roof at Northern Stage is thoroughly faithful to the script, and yet is staged in a way that make the plays his own to great effect.

Northern Stage does many things, but their speciality is classic plays with their own take on it. Sometimes they stage it in a way that’s not to everyone’s tastes (Blue Remembered Hills), and sometimes they pick plays that I think are now dated (Look Back in Anger), and they’ve got a relatively easy ride compared to nearby Live Theatre who stick their neck out with new untested plays. But on the whole, Northern Stage have an excellent record of doing what they do well, with a decent run of Catch 22 just under their belt. But Cat on a Hot Tin Roof got me particularly excited because this is directed by James Dacre, who was behind the superb The Thrill of Love from the New Vic last year. And a large part of the superbness came down to Dacre’s directing. And I am pleased to say that he did not disappoint in Newcastle.

Tennessee Williams might be a more specialist taste than many other famous writers of the period, but he was certainly one of the boldest. In a way, much of his writing was ahead of his time. Most famously/notoriously, he routinely dropped casually racist language into his plays, not because he thought it was okay, but because that’s the way things were. (For anyone not convinced by that, Sweet Bird of Youth is a good example of a play that portrayed the racist politician as the clear villain.) Then there’s subjects which are uncomfortable today, such as rape (or sex with questionable consent). Cat on a Hot Tin Roof, however, leaves both of these subjects alone for a change, and instead touches on the then-taboo subject of homosexuality. In the back-story is some sort of relationship between Brick and Skipper, friends and team-mates at College American Football. They might have had those feelings for each other – or they might simply have been close friends and it was just the way other people perceived it. Either way, the consequences were very real: Maggie, Brick’s wife, grew jealous of this friendship, Skipper slept with Maggie purely to show he wasn’t like that, and later killed himself out of guilt.

END_OF_DOCUMENT_TOKEN_TO_BE_REPLACED

The New Vic have a good record of their revivals of classic plays – but their new play, The Thrill of Love is even better.

There’s a lot of kudos for being the first something. If you’re a woman, you can be the first woman in space or the first female Prime Minister. If you can’t achieve either of those, you can also be famous for being the last something. And that’s what Ruth Ellis achieved, the only snag being the record she bagged. Being the last woman to be hanged carries the annoying side-effect of death. On the plus side, her story was so fascinating she was immortalised in history. Peter Anthony Allen, the last man to be hanged, must be feeling very short changed. Anyway, since her death there have been many depictions of her life on stage and screen, and the latest contribution comes from Amanda Whittington (best known for Be My Baby), with a play called The Thrill of Love.

This has been premièred by the New Vic Theatre, first at their own theatre in Stoke-on-Trent and now touring to the Stephen Joseph Theatre, as they often do. If you’re wondering why these two theatres tour their productions to each other so much, it’s down to their shared history. In the early days, before Scarborough’s famous producing theatre was named after its founder, Stephen Joseph went to Stoke to set up a second theatre in the round, taking with him a little-known playwright called Alan Ayckbourn. Eventually both men returned to Scarborough, but the two theatres have generally maintained good relations. But whilst the Stephen Joseph Theatre is best know for the works of the not-so-little-known-any-more playwright, the New Vic has gone its own way, mostly showing classic plays such as Cider with Rosie, Laurel and Hardy, And A Nightingale Sang and Bus Stop in a style that is unmistakably theirs. I hadn’t realised that, for once, they were touring with a completely new play.